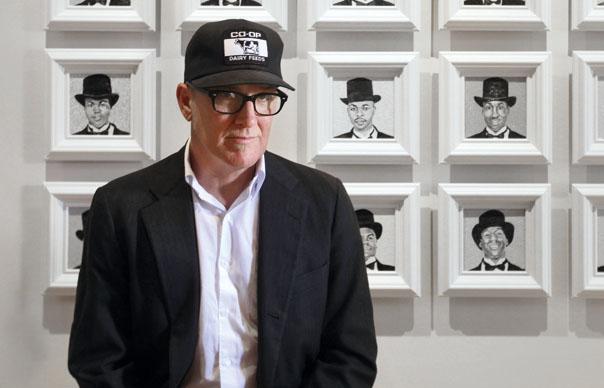 The sound on Mr M is funereal, with flecks of hope. True, that description might not help distinguish it from the rest of Lambchop’s back catalogue, on which Kurt Wagner and his cohorts have pioneered their own take on the Nashville Sound. Just as Chet Atkins added strings and pop manners to hillbilly music, so Lambchop – working with producer Mark Nevers at his Beech House studio – have patented a melancholy sound; filed under Americana, yet steeped in soul. Lambchop’s Nashville Sound is well-mannered, yet Wagner’s lyrics are frequently dark, and sometimes comic. He just about summed it up on the song “The Old Gold Shoe”, from the group’s classic 2000 album, Nixon, which refers in passing to “painful Southern bliss”.

So what’s changed? Well, everything, and nothing. The surface of Mr M is smooth, tending towards jazz. It is punctuated by cinematic flourishes. There is hurt, certainly, and there is bliss. Being Southern isn’t really negotiable, but you can sense it in the way Wagner approaches even the darkest subject matter with impeccable manners. But, while Lambchop’s last album – 2008’s OH (Ohio) – attracted apologetic compliments about how they keep re-making the same record, Mr M is bold in parts, and surprisingly experimental.

Four years is a long time between albums, and there is perhaps a sense that Wagner also felt that Lambchop had reached the end of their rope with OH (Ohio). After touring that album, he backed away from music, channelling his artistic impulses into painting. The suicide of his friend and occasional collaborator Vic Chesnutt on Christmas Day, 2009, hit hard, but ultimately provided an inspiration for the songs. And, just as Wagner was beginning to sense a way forward, Nevers came to him with an idea.

The spark was Frank Sinatra’s version of “September Song”. Listening to it afresh, Nevers found himself struck by the string arrangements. They didn’t just colour in the background to Sinatra’s vocal, though they did that beautifully. The orchestra also swirled ominously, almost taking up arms against the vocal melody.

On previous Lambchop albums, the strings had offered support to the tunes, smoothing down the rougher edges of Wagner’s songs. For Mr M, the approach was different. This time, the songs would be sent to an arranger, then the string parts would be deconstructed and reassembled by Nevers, who would play the orchestral sounds as a single instrument, like a guitar. The term Nevers and Wagner coined for this approach was “psycha-Sinatra”, though Nevers concedes modestly that they never came close to capturing the essence of Frank, “because we are stupid and drunk”.

Still, you can hear the boldness of their intent straight away on the opening song, “If Not I’ll Just Die”, which swirls in like a Sunday matinee, before settling into a mood of elegant despair. “Don’t know what the fuck they talk about,” Wagner croons, “Maybe blowing kisses, maybe blowing names/Really, what difference does it make?” He doesn’t sound like a member of the Rat Pack; more like an insomniac speed-dialling The Samaritans.

Wagner is reluctant to quantify how much of Mr M is directly about Chesnutt, saying only that the record reflects what was going on in his life at the time the songs were written. But it’s a fair bet that the gorgeous title track “Mr Met” is informed by the sense of stumbling through grief. “Friends make you sensitive,” he sings, “love made us idiots/Fear makes us critical/Knowledge is difficult.” It’s a strange song, almost childish in its simplicity, but punctuated by heavenly strings.

“2B2” is no less affecting. The tune is worn down, florid with gloom, while the lyrics are apparently a straight record of Wagner’s response to the passing of his soulmate. The opening line is a startling evocation of emotional dislocation: “Took the Christmas lights off the front porch, February 31st” The mood continues on “Nice Without Mercy” which offers a sideways reflection of Chesnutt’s funeral. It’s nostalgic in tone, musically understated, suggestive, elusive, and quite lovely: “And the shadows disappear,” Wagner sings, “in a day that breathes, forever.”

Elsewhere, the mood is brighter. “Gar” is instrumental mood music, with outer-space Beach Boys’ harmonies, signalling – perhaps – an emotional thaw. “Buttons” is funny and sad, rhyming “night long struggle” with “metaphoric housing bubble”. “Betty’s Overture” is like a 1970s’ TV theme: something starring Peter Falk, perhaps, or Harry Dean Stanton as a horse doctor with a past he’d rather not confront. By the end, on “Never My Love”, the emotional journey is complete, with Wagner musing hopefully on the nature of love. Here, the musical arrangement is delicate, and rather experimental, with melancholy strings brushing against angelic harmonies.

So, yes, death is all around, with Wagner slumped uneasily in his easy chair. But this is Lambchop, so the tough stuff comes rolled in cinnamon. Psycha-Sinatra doesn’t quite capture the record’s spirit of jazzy strangeness. Maybe you could call it Frankadelic.

But, really, this is lounge music. Departure lounge.
Alastair McKay

Q&A
Kurt Wagner
What was the idea for the record?
It was something that developed in the studio, mainly. I was just trying to get back to writing songs, and trying to make ’em count. As I was doing that, Mark Nevers had this production idea he wanted to try. We put those two things together and built the record up slowly.

Why had your songwriting dried up?
Partially, it was due to my friend Vic [Chesnutt]’s passing. But also when we finished OH (Ohio), and did the touring, I started going back to painting. I was trying to make painting part of my life again. Vic passed away right around that time, and it was difficult for me to get my head around making music without him around.

Is the song ‘Nights Without Mercy’ about Vic’s funeral?
Yeah. Of course everything I do is comes about in a sideways kind of way. I was working on a book where I’d create text with a photographer, so part of the song is taken from that, then I went off and tried to deal with it. It’s important for me to recognise Vic’s passing; I want to make sure people remember him. It’s just difficult to share. My point in general is that it’s really a record about love and the discovery I made about love by experiencing a loss. On paper that could look like a pretty big downer, but ultimately it’s fairly hopeful. It just drags you through my experience of working through it.
Interview: Alastair McKay