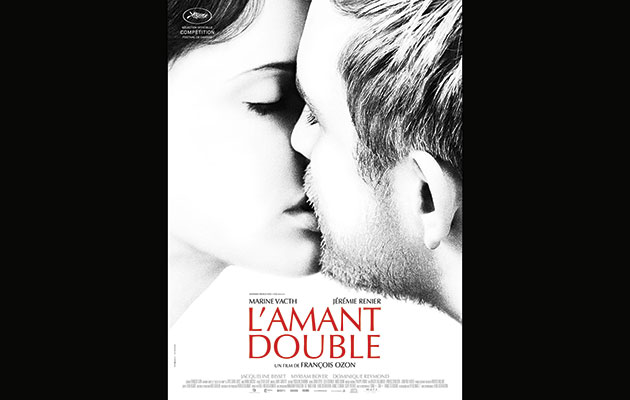 The latest from Francois Ozon is, broadly, 50 Shades Of Grey directed by David Cronenberg. That is to say, there is sexual ‘awakening’, a subplot about rival twin psychiatrists and a smidgeon of body horror. Based on Joyce Carol Oates’ Lives Of The Twins, Ozon’s film follows a 25 year-old ex model, Chloe (Marine Vacth, star of Ozon’s 2013 Young & Beautiful), with anxiety issues which manifest themselves as stomach cramps. She is recommended a therapist which is how she meets Paul Meyer (Jérémie Renier) – tweedy but sympathetic – with whom she begins a relationship.

But Paul has a twin, Louis (Renier again), who he refuses to talk about – a much darker soul, with whom Chloe begins an aggressive sexual relationship. Soon Chloe is digging deeper into the mysterious estrangement between the twins – who are they are what are their secrets? All of which brings her to the door of Jacqueline Bisset where revelations of some description are forthcoming.

Ozon’s film is really a stylish funhouse mirror, where we can no longer be entirely sure where reality ends and fantasy begins. There is one particularly weird sequence where Ozon shows Chloe and Paul making love – only for Louis to join them, at which point Chloe develops a second head so she can engage both her lovers.