KINGS OF LEON – COME AROUND SUNDOWN 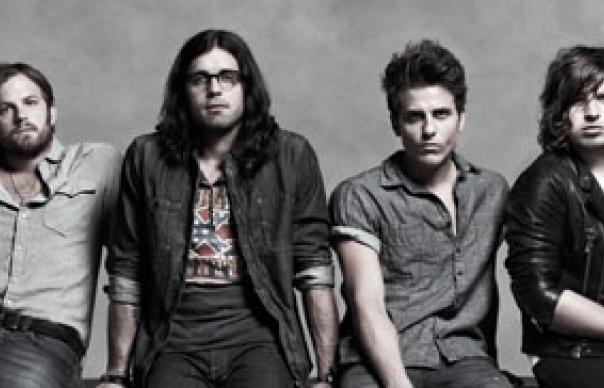 Though the temptation to rest on their laurels must be great – multi-million successes and all – on their fifth album, it’s something that Kings Of Leon emphatically refuse to do. Instead, Come Around Sundown finds the band energetically grounding themselves. Rather than losing itself in some vaguely decadent anomie, the album is all about grit and groove, the stature and accomplishment of their present brought to bear on the influences of their earliest days.

As you might expect, Come Around Sundown is a family affair, about old traditions, and what the younger generation make of them. Having changed up their production team for 2008’s 2.5 million-selling, stadium friendly Only By The Night, here the reins are again taken by Angelo Petraglia and Jacquire King. What’s most persuasive about this album, however, is that it honours both the band’s most recent and earliest incarnations.

In its inspirations and lifeblood, Come Around Sundown takes Kings Of Leon back to the source. Not widely exposed to old records when they formed in 2002, the band began their musical education with Petraglia, a failed rock’n’roller from Boston who’d reinvented himself as a Nashville songwriter for hire. Petraglia introduced the kids to Exile On Main St, Beggars Banquet, The Velvet Underground and other sacred texts. All round, it seemed it was the band’s very innocence of rock basics contributed to their freshness – and that same quality is again present here.

If 2003 debut Youth And Young Manhood had a concise, sparky promise, each of the subsequent Kings Of Leon albums represented an exponential growth spurt. Aha Shake Heartbreak (2005) was plain exhilarating, 2007’s Because Of The Times an invigorating further leap. For all the successes of Only By The Night and the inescapable singles “Use Somebody” and “Sex On Fire”, Come Around Sundown demonstrates just how ready the band are to reconnect with their first musical loves, and how boldly they’ve integrated classic moves into their own singular style. Now, finally, we can hear Kings Of Leon’s link to the great Southern bands that came before them.

The Followills make the connection most overtly and gratifyingly on the album’s two defining tracks: the rough-and-tumble “Back Down South” and the closing blue-collar rhapsody “Pickup Truck”. On the former, Caleb breaks out his most cornpone drawl and Matthew plays a Marshall Tucker-like fiddle jig on a slide guitar, while the DNA-powered rhythm section of Jared and oldest brother Nathan, a monster drummer, bang out a vintage Allmans groove.

Here, finally, is a cut that can be readily embraced by rednecks and Baby Boomers without alienating a younger fanbase. The same can be said for “Pickup Truck”, wherein Caleb breaks out his preternatural yelp, at once wounded and resilient, in a deep-cured slice of down-home magical realism. Somewhere, Gram Parsons is smiling.

The transitional “Radioactive” is a thrusting rocker, on which drums, bass and guitar engage in a breathless sprint from end to end; little wonder the record company chose it as the first single. Otherwise, though, Come Around Sundown sees Kings Of Leon immersing themselves in the sounds of old records as if they’d just discovered the motherlode. Which indeed they have.

This child-like sense of novelty permeates “Mary”, an astounding melange of doo-wop, Sun-era rock’n’roll and early Beatles that may be the album’s most bizarro and thrilling piece of work. On “Pyro”, Caleb elbows his way through the hammering dual-guitar riffage to bray out a righteously Stax-style vocal under clouds of dirty choirboy harmonies, in an inversion of Exile’s female gospel chorale. The echo-chamber melodrama “The Face” is like a Roy Orbison ballad on steroids.

The band keep the pedal to the metal with “The Immortals”, a massive slab of mutated Southern boogie with a funky groove in the transitions leading into a stately cadence under mushroom-cloud choruses. “Beach Side”, which evokes classic songs of summers past, is a sultry but propulsive track in which Matthew’s left hand keeps threatening to slide into dissonance. “Pony Up” turns on a sparkling guitar riff right out of Mickey & Sylvia’s “Love Is Strange”. True to its title, “Mi Amigo” cruises south of the border on a swaying tempo and faux-mariachi horns.

This time out, the band want you to have an experience, and that’s what you get, on a record that’s over the top, wildly inventive and satisfying in the ever-deepening way of landmark longplayers from the last century. Sure, Come Around Sundown honours their elders. But it also finds Kings Of Leon remaining utterly true to themselves.
Bud Scoppa