King Creosote – From Scotland With Love

Fresh from the acclaimed Diamond Mine collaboration, the prolific Fifer pushes forward on his own... 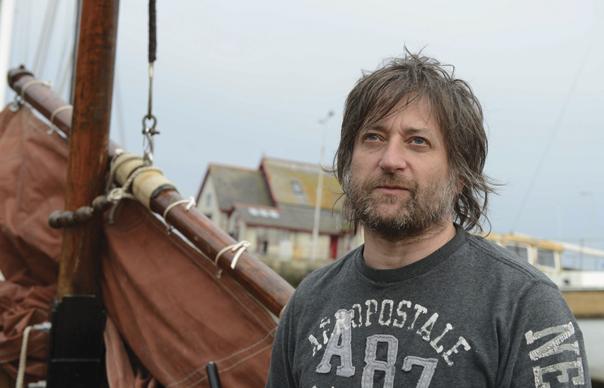 Fresh from the acclaimed Diamond Mine collaboration, the prolific Fifer pushes forward on his own…

King Creosote, aka Kenny Anderson, had been beavering away at the DIY indie-folk coalface for the best part of two decades. He was the ringleader of Fife’s Fence Collective, the thriving artistic community which spawned a record label, a series of homespun festivals and provided a home for the likes of James Yorkston, Kid Canaveral and Withered Hand.

Anderson has over 40 albums to his name, many self-released, and his solo career – he would no doubt baulk at the word – is a blur of collaborations, side-projects and limited edition releases. Despite a short and ultimately ill-fated dalliance with Warner Brothers, for many Anderson only really appeared on the radar with Diamond Mine, the wonderful, Mercury-nominated album he made in 2011 with English electronic musician Jon Hopkins.

Working with Hopkins took Anderson out of his comfort zone, and the results were all the richer for it. From Scotland With Love demanded a similarly bold approach. Another collaboration, this time with director Virginia Heath, the album was conceived for a poetic film about Scotland, timed to coincide with the Commonwealth Games, using archive documentary footage from the early twentieth century. The music is far from incidental. In a film without narration or interviews, the songs dictated many of Heath’s visual choices and are tasked with much of the heavy lifting.

Two short, atmospheric instrumentals – “Crystal 8s” and “A Prairie Tale” – may stray into more obviously cinematic territory, but From Scotland With Love is an impressively unified, self-standing piece of work. With the themes of love, loss, war, emigration, work and play worn lightly, the project’s cinematic roots are revealed in other ways, the most obvious being that the warm, melancholic roll of Anderson’s music unfolds on a larger scale, as though to fit the dimensions of the cinema screen.

On “Something To Believe In”, the scene-setting accordion burr and Anderson’s tremulous falsetto open out into a stately, powerful air, and this tenderly anthemic quality holds for much of the record. “Miserable Strangers” and “Leaf Piece” are mini-symphonies, stitching together elegant string arrangements, surging dynamics and Anderson’s affecting Scottishisms into bewitchingly beautiful music.

There are nods here to Diamond Mine’s sparse, elegiac tone, as there are in the drifting “Crystal 8s” and “Pauper’s Dough”. The latter, a moving hymn to the dignity of the labouring classes, deploys some judicious recycling. Anderson lifts the chorus of “Harper’s Dough”, from his 2003 Domino debut Kenny And Beth’s Musakal Boat Rides, and builds a beautiful song around it, the chorus of voices swelling to a refrain which becomes a rallying cry: “You’ve got to rise above gutter you are inside.”

This is not a top-down history, but instead an insight into everyday lives captured with wit and warmth. The nature of the project demands that Anderson writes from outside his own experience. Often the perspective is female, as on “One Floor Down”, a lonely tenement love story played out over a lush bossa nova, and the thrumming “Cargill”, where a fisherwomen frets over the safe return of the eponymous lover, gone to sea with “my heartstrings entangled in your net.” His tone is always empathetic but he refuses to over-sentimentalise. “Largs” is a frantic jazz-polka, all oompah, boom and bash, relaying the madness of a seaside town turned upside down by hordes of city escapees on their annual holiday spree. The meaty indie-rock of “For One Night Only” explores a similar theme, the need for release and, if required, find refuge in a drunken alter ego, in this case “Wayne”, who “is appearing for one night only”.

At the other end of the spectrum, “Bluebell, Cockleshell, 123” freeze-frames a scene of youthful innocence. Anderson takes a skipping rhyme, performed by young singers from Glasgow’s Beatroute Arts group, and introduces it to a crisp, acoustic strum. The two merge beautifully, a neat summation of everything the album achieves on a wider scale. From Scotland With Love successfully and movingly unites past and present, old and new, sight and sound. Another diamond.
Graeme Thomson

Q&A
KENNY ANDERSON
Can you outline your working methods on this project?
It was a collaboration between film and music from the off. Virginia wanted the songs to be the narration and highlighted different themes she wanted to explore, and I basically had to get my imaginative brain into play and pen songs that I hoped she’d be able to find clips for. It was a giant leap, and even up to the wire I was seeing footage for the first time and trying to find something halfway appropriate. It was like game of table tennis between the film end and the music end.

Did it make new demands on you as a writer?
You always draw from your own experiences, but the film is a series of stories within stories, very much open to interpretation, so it allowed me to explore different characters. A lot of it was from the female point of view, which was a bit daunting.

Will you work again with Jon Hopkins?
Yes. We were going to start at the end of last year, but he’s very busy, he seems to be hopping around all over the place. We’re keen for it to be different from Diamond Mine, and Jon is keen to have more of his input from a song structure point of view. He wants to work on some soundscapes and send them my way, which will be interesting.
INTERVIEW: GRAEME THOMSON