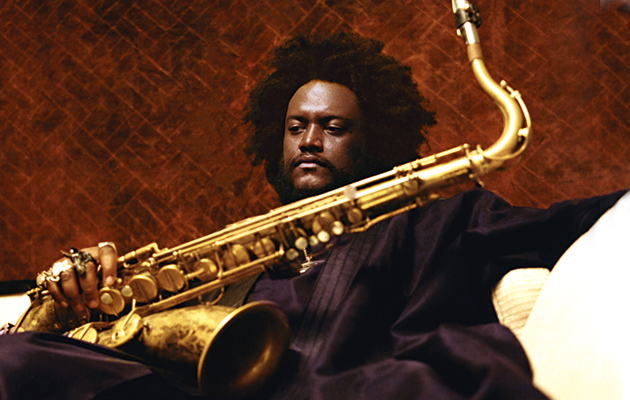 One hundred and one years since the first jazz record, Original Dixieland Jazz Band’s 1917 cut “Dixie Jass Band One Step”, was committed to wax, jazz itself ought by rights to be a museum piece – as relevant to a 21st-century popular music audience as fencing,  or falconry. True, the genre itself has  now come to occupy a niche, largely fraternised by a select band of scholars and greying enthusiasts. Yet the music itself remains in good health, thanks to the vitality of a number of dreamers and visionaries who still find something meaningful and profound in the genre’s intermingling traditions.

One such figure is Kamasi Washington. A gentle giant from Inglewood, a city in Los Angeles immortalised in verse as ground zero for gangsta rap, Washington ingested some of that music, but found his true calling in the saxophone. While studying at UCLA’s Department Of Ethnomusicology, he fell in with a refined local jazz scene, playing sideman to the likes of Raphael Saadiq and Erykah Badu, and appearing in Snoop Dogg’s live band Snoopadelics. But broader recognition came through his arranging role on Kendrick Lamar’s 2015 LP To Pimp A Butterfly, a hip-hop record that drew heavily on the musicality of jazz. …Butterfly was released to broad critical acclaim, and Washington used the spotlight well. Mere months later he broke cover with his own album, The Epic – 170 minutes of soulful, symphonic music that paired his questing tenor sax with a hotwire band, a 32-piece orchestra and a 20-member choir.

Heaven And Earth is a deeply ambitious record, but you wouldn’t paint Washington as an avant-gardist, exactly. On the contrary, the album’s strength is to be found in its proximity to established musical traditions, and the lines it draws between them. From the Coltranes – John and Alice – he takes a sense of spiritual enquiry and compositional freedom. From ’70s Miles, comes a broiling fusion, typified by the deep bass grooves of longtime Washington collaborator Stephen ‘Thundercat’ Bruner. Throughout, it’s easy to hear the constant influence of soul, gospel and funk – most notably on a refreshed cover of Joseph Koo & Ku Chia Hui’s theme tune for 1972 Bruce Lee film Fist Of Fury, which vocalists Dwight Trible and Patrice Quinn reframe as a noble call to arms for the Black Lives Matter era (“Our time as victims is over/We will no longer ask for justice/Instead we will take our retribution”). As fine as Washington is as a saxophonist, he’s also a skilful arranger. Listen to the rousing choirs that soar forth on cosmic winds on “The Space Traveller’s Lullaby” and you’re reminded of Sun Ra, or the jazz symphonies of composer David Axelrod, whose records were later sampled and  cut into breaks by later generations of  hip-hop producers.

If Washington draws from a broad range of influences, he wears it easily. Often, Heaven And Earth settles into a sort of luxurious smoothness, as if trying to obliterate the evils of the world through sheer good vibes. “Testify” is a standout casually dispatched towards the end of the Earth side, Washington’s sax shadowing Patrice Quinn’s smoky vocal as it spells out a message of love overcoming all. But this lushness is balanced with a devilish complexity – hear how “Song For The Fallen” starts laidback, but suddenly starts cramming in notes, like a pot gradually brought to the boil, while a cover of trumpeter Freddie Hubbard’s manic 1962 hard bop “Hub-Tones” is dispatched with furious, zig-zagging sax and eruptive percussion solos. When it needs to, Heaven And Earth really moves.

The title promised something gigantic, and the contents deliver. If you fully digested The Epic, there will be relatively few surprises here – Heaven And Earth counts as a refinement of past ideas, the playing a little neater, the soul a little sweeter. Yet there’s no denying Kamasi Washington has captured his moment. This is the rare jazz record that feels equipped to venture outside the genre’s familiar borders and engage with the wider world. In an era of division and tension, its embrace of tradition and its boldness of spirit feel not just welcome, but revitalising.