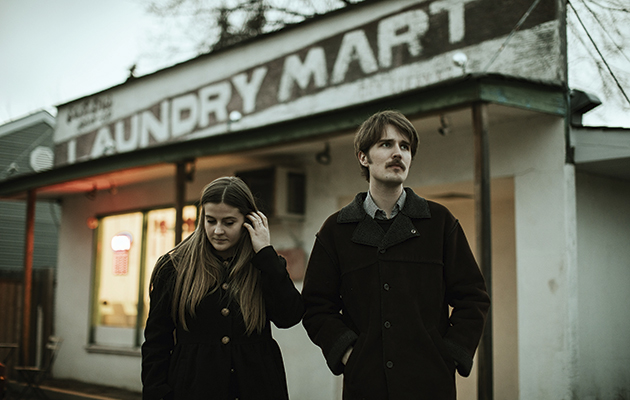 For all its jocular breeziness, it illustrates the sort of isolation that growing up in a remote outpost of southern Saskatchewan brings. Second cousins Linthicum and Kacy Anderson were raised in the Wood Mountain Uplands, surrounded by endless prairies and immense skies, their families descendants of ranchers who’d moved up from South Dakota. The nearest record store was a five-hour drive away. Opportunities were just as thin on the ground when they started performing together as teenagers. Aside from the odd night in a nearby tavern, Kacy & Clayton’s most regular gig was a Sunday evening slot at the local nursing home.

Naturally, this sense of seclusion tended to inform the music they gravitated towards, particularly agrarian folk and old-time country. Music was a way of deepening their ancestral connections, keeping alive the characters and stories passed down by family and neighbours. Such vivid documentation lent itself to the richness and tone of traditional folk, with its attendant themes of tragedy and loss, emotional betrayal and retribution. It’s no surprise, then, that the pair cite the works of Shirley Collins, Fairport Convention, Davy Graham and The Watersons as key touchstones.

2011’s home-recorded Kacy & Clayton featured a glut of folk and blues standards, while The Day Is Past & Gone, issued a couple of years later, mostly relied on similarly traditional fare. The big leap occurred in 2016 with New West debut Strange Country, dominated by luminous originals that joined the dots between Appalachian music, vintage Bakersfield twang and the Laurel Canyon folk revolution of the late ‘60s and early ‘70s. It also showed that the pair weren’t averse to the occasional electric stomp.

The Siren’s Song scopes out that vision further. A cultured collision of agile folk and vivid psych-country, its sound is toughened by the addition of bassist Shuyler Jansen (producer of (Strange Country) and drummer Mike Silverman. The album also benefits from the guiding presence of Jeff Tweedy, who offered to produce Kacy & Clayton after they’d supported Wilco in San Francisco in the autumn of 2016.

At its core is Anderson’s deliciously languid voice, a thing of fluting purity, and the fingerpicked finesse of Linthicum’s guitar-playing. There are keen echoes of major inspiration Richard Thompson in the subtle nuances and inflections, particularly the chuggy drone of “A Certain Kind Of Memory” and the solo that cuts like sunlight through dust on “Just Like A Summer Cloud”.

“Cannery Yard” manifests the duo’s passion for folk like no other. Its darting acoustic guitar is indebted to both John Renbourn and Bert Jansch, with Anderson relaying a tale of a lover scorned, the despairing subject throwing herself from a window onto the hard snow below. Kacy’s tidy fiddle break and Steeleye-ish harmonies add to the illusion of an old border ballad given a fresh rinse. The album’s sole cover, incidentally, is a rendition of the traditional “Go And Leave Me”, Kacy & Clayton taking their cue from Norma Waterson’s version.

Elsewhere, The Siren’s Song bares its country credentials. Anderson allows her partner to take the lead on “White Butte Country”, which eases along on a snappy guitar rhythm that was once the preserve of Jerry Reed. The truly memorable “This World Has Seven Wonders” maps the woes of a lonely soul in a heedless world, with Anderson at her most desolate: “Got a call from mother wishing that I’m well / I didn’t have the heart to say this city’s living hell / ‘Cause there’s two kinds of people living in this galaxy / Everybody else and me.” It’s the kind of cold-times ballad that Glen Campbell or Gram Parsons used to spin into gold.

Solitude also forms the central theme of “The Light Of Day”. Pitched midway between ‘60s country and electric folk, the smokiness of Clayton’s guitar in contrast to Kacy’s unpolluted clarity, its lyrics concern a woman trapped in the vacuum of a loveless marriage. “Thought of the time she packed her bags and went / Only to return again,” sings Anderson, in a manner that begs comparison to Chris Gantry’s “Dreams Of The Everyday Housewife”. Like The Siren’s Song itself, it feels both ageless and beguiling, a classic record for this or any other time.

Q&A
CLAYTON LINTHICUM
What made you adopt a full band for The Siren’s Song?
Touring our last album, Strange Country, we wanted to play the electric songs, so we brought in Mike and Shuyler. Then Kacy and I just decided to make an album of that kind of material. We’re really big fans of garage rock and country from the mid ‘60s, but we’d never had the chance to properly use those influences before.

Were you listening to anything in particular during the writing process?
Late ‘60s Everly Brothers, especially Two Yanks In England [1966] and Roots [1968]. Plus Jerry Reed and the Bobby Fuller Four. And the British folk influence has been with us the whole time. We were listening a lot to Bright Phoebus [1972], the Watersons album. That remains an inspiration for both of us.

How did Jeff Tweedy end up as producer?
We opened for Wilco at the Fillmore and he came over to talk to us at soundcheck. He’d just been working with Richard Thompson, so we talked about that and about where he grew up in Southern Illinois. We felt we had a similar upbringing in Saskatchewan. Then he invited us to The Loft next time we were coming through Chicago. He was pretty hands-off in the best way. Most of all, he told us to stop being hard on ourselves.
INTERVIEW: ROB HUGHES