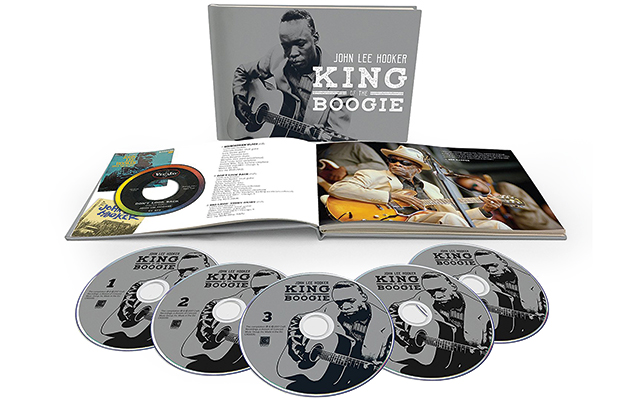 John Lee Hooker was the most adaptable of bluesmen. Working within a genre that was often bound by a distinct set of scales and progressions, Hooker’s natural feel and spontaneity allowed him to move between acoustic folk, electric blues and R&B with apparent ease. His music was governed by intuitive grooves and weighted with an iron sense of authority.

Released to coincide with what would have been Hooker’s 100th birthday, King Of The Boogie is a career-bridging overview that highlights these abundant qualities across five discs. The thrill of his earliest recordings is captured on the first of these, from the raw electric thump of 1948’s “Boogie Chillen” and “Crawlin’ King Snake” to the low wail of “Moaning Blues”. The latter, recorded under one of his aliases, Texas Slim, sounds like he’s singing from the depths of a bottomless well.

Perhaps most striking of all is the unmatched physicality of Hooker’s music. Guitars spit, hands slap, feet stomp. It’s an instinctive approach heightened by the almost casual freedom of his playing and singing, shifting between talking blues and blank verse. There is, too, the ruminative, more soulful side of his work – “Maudie”; “No Shoes” – jostling among big-hitting vamps like “Boom Boom” and “Dimples”.

Of particular interest to collectors is the inclusion of several previously unheard songs, three of them studio recordings. 1955’s “Unfriendly Woman”, with Jimmy Reed on harmonica and Eddie Taylor on guitar, predates the single version issued by Vee-Jay three years later, though there’s little to choose between the two. An economical “When I Lay My Burden Down” finds Hooker in unusually tremulous voice. And the intriguing “Meat Shakes On Her Bone”, dating from 1961, is an electric variation on the unplugged “She’s Long, She’s Tall, She Weeps Like A Willow Tree”.

As the set winds through a selection of live cuts on disc four, there are five more unheard rarities from a Berlin gig in May 1983. Hooker is in garrulous mood, cackling away and exhorting organist Deacon Jones to “make it funky for me” prior to solo’ing on the terrific “It Serves Me Right To Suffer”. Also worthy of mention is an untamed “Boom Boom”, with a guitar solo that pelts out of the speakers.

King Of The Boogie closes with a disc of collaborations that highlights Hooker’s pan-generational appeal and reach. ‘Little’ Eddie Kirkland, Eric Clapton, Carlos Santana, Bonnie Raitt, Van Morrison and Joe Cocker all feature, though it’s the remarkable “Peavine”, recorded with Canned Heat in 1971, that really catches the breath. Hooker trades licks and rhythms with ‘Blind Owl’ Wilson in such a joyfully unbidden manner that all he can do at one point is chuckle. Who said the blues was a sorrowful man’s game?