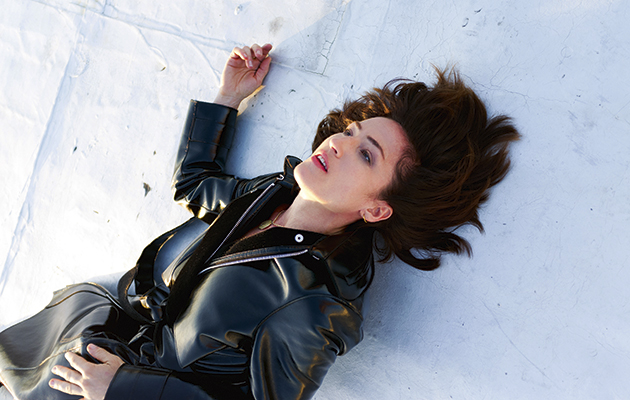 Though she has been devoted to music since she was a conservatoire kid, channeling the spirits of Hendrix and Mahler through the unlikely medium of the five-string viola, it wasn’t until Joan Wasser was 36 that she released a record entirely of her own. Real Life, her immaculate debut album, was abundantly worth the wait: a whole lifetime of love and trauma poured into songs so impeccably composed and performed (as if following Emily Dickinson’s observation “After great pain, a formal feeling comes”) they felt like standards.

Since then it feels like she’s been making up for lost time. “I say yes to almost everything,” she says, explaining how in the last couple of years she has scored the soundtrack to Brian Crano’s film Permission, produced Scottish folk band Lau, worked with Sufjan Stevens, John Cale, RZA, Norah Jones and Daniel Johnston (among others), and collaborated with Ben Lazar Davies on last year’s wonky pop curio Let It Be You.

Damned Devotion is her fifth album, and feels like a kind of reckoning, a taking stock, and a work of renewed focus. If 2014’s The Classic was a high concept exercise in soul pastiche, here she returns to her core territory, forensically charting the human heart, tracking the course of midlife love, lust and loss. Real Life was, by her own admission, a shameless attempt to make an Al Green record. But this is a darker affair, with an air of gothic RnB, at times like Ann Peebles produced by Timbaland.

The opening track “Wonderful” effectively sets the tone: it’s a haunted reverie, built on minimal programmed beats and an electric piano of such reverby desolation it sounds like it was recorded at the very bottom of the well of loneliness. “I’m losing these junk souvenirs,” she sings, implacably, “What did they ever do but tangle up my game?” – and it feels like she has remorselessly cut all the flourishes, the grace notes, that make her so often an easy listening joy, and reduced her art to a guttering flame. It’s followed by the irresistible honeyed siren song of lead single “Warning Bell” and between them they set out Damned Devotion as the most magnificently seductive torch song opus since the second Portishead album.

The hint of Prince is suggestive. The record’s title track seems to aim at some synthesis of eros and agape, or the carnal and the oceanic, with brutalist hip hop beats and simmering filtered vocals (“Take me and you won’t be sorry… firebrand my breath at 2am”) building to an almost gospel chorus. It even ends on a cute Wendy-and-Lisa-like rococo flourish of angelic harmony. But like Prince, always hoping to finetune the balance of spooky electric and lovesexy, Joan seems more successful when she follows one or the other impulse rather than attempting a compromise.

Devotion is expressed most beautifully on ‘What Was It Like’, a heartbreakingly sweet memoir of her father, (“my dance recitals were never concise, you never missed them – you were always there for me”). And the damned despair comes to perfection on “Silly Me” which is the Billie- Holiday-on-Hi-Records ballad that Wasser has long been threatening to perfect. Not much more than a shuffling drum machine and some Rhodes piano at first, it descends through several circles of hell until Joan is joined by a choir of fallen angels to sing a line of the most exquisite abjection “God help me to never see my reflection in your eyes”.

Joan has suggested the album is essentially asking the question “How does one live a devoted life without becoming obsessed or losing one’s mind?” It’s worth remembering that she was named after Joan of Arc, and has sometimes lived with a similar intensity of vocation. In fact, “I Was Everyone”, the closing track from her 2011 album The Deep Field is written from Joan of Arc’s perspective: “And what if I woke up tomorrow not afraid /I could decide to trust the voices and take courage?” Here, the closing, hymn-like, “I Don’t Mind”, feels like a song written in the afterglow of a bonfire of illusions. “Once all the voices begin to fall inaudible / who am I left with? / I don’t know for sure. / But through the snowfall I am listening / and I hope you’re listening too.” It’s a beautiful hymn to receptivity and a reminder once again that no one today negotiates the sacred and profane quite like Joan Wasser.