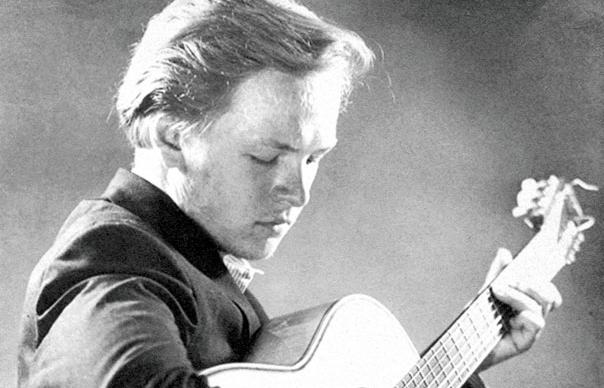 On the verge of being rescued from the streets of New York and returned to safe harbour in Woodstock in the mid-1990s, Jackson C Frank got caught in the crossfire when neighbourhood kids were taking pot shots with an air rifle. He lost an eye. That was pretty much par for the course.

From freewheelin’ to freefallin’, Frank’s story is a relentless downward spiral. He lived fast enough in his mid-1960s pomp to have died younger, but clung on until 1999 having spent decades bouncing between homeless hostels and mental institutions, the blues of his most celebrated composition having run his game throughout.

Reissued again in another new sleeve, the album Paul Simon teased out of Frank in 1965 is the only significant document of this extraordinary songwriter. A footnote in the pre-history of British folk rock by virtue of his turbulent relationship with – and lasting stylistic influence on – Sandy Denny, Frank cast a long shadow over many of the leading men he met after crossing the Atlantic on the Queen Elizabeth, in a quest to buy expensive cars and escape from Bob Dylan’s shadow.

Bert Jansch reckoned him “a genius… an absolute genius”, Roy Harper wrote “My Friend” in his honour, and – man handing misery on to man – Nick Drake committed a rough version of Frank’s greatest musical statement, “Blues Run The Game”, to tape in his bedroom in Tanworth-in-Arden. “The newspaper obituary of my inner self,” according to Frank’s original album sleevenote, the song is a magnificently taut summary of the Frank’s fruitless search for solace. “Catch a boat to England, baby/Maybe to Spain/Wherever I have gone/The blues are all the same.”

At 22, Frank was no stranger to heartbreak. Badly scarred at the age of 11 in a boiler explosion and fire at his school in Cheektowaga, New York State, which killed half of his classmates, he took up guitar during his recuperation, and was another wannabe on the local folk scene in nearby Buffalo – crashing and burning in an audition for Dylan’s manager Albert Grossman, according to one ex-girlfriend – before abandoning his job as a newspaper copy boy when he received a $100,000 insurance pay-out for the fire on turning 21. He came to England “to hide” but stood out a mile on the Troubadour-Les Cousins-Bunjies circuit of Bohemian folkie London. “Scruffy and gruff,” is how Linda Thompson – then Peters – remembered him when she spoke to Uncut.

“I don’t recall much of his back story, but he had more money than all of us, which wasn’t hard. Also Jackson was, as they say now, well hard! Maybe you’d call him bipolar these days. He was either super-confident or super-nervous. Nothing in-between.”

The pre-fame Simon was determined enough to get whatever magic Frank possessed down on tape, with Art Garfunkel acting as tea boy and Al Stewart providing a solitary extra guitar track. “I recorded my album in under three hours in a CBS studio on New Bond Street in London,” Frank remembered in the 1990s. “I remember hiding behind a screen while I was singing and playing, because I was just a little nervous and I didn’t want anyone to see me.”

A bundle of raw nerves threaded through impenetrable jazzbo poetry, Jackson C Frank still bears witness to how horribly exposed its creator felt. While there is throwaway stuff – the “will-this-do” Civil Rights thrash “Don’t Look Back”, Tim Buckley-ish free-form “Just Like Anything” and back-porch doodle “Here Come The Blues” – it is a record which sounds gruesomely, self-consciously adult.

His reading of the traditional “Kimbie” is a grim howl, while the oppressive thrum of “Yellow Walls” and “I Want To Be Alone (Dialogue)” prefigure something of the film noir profundity of 1-2-3-4-era Scott Walker. Frank’s sonorous voice wraps a mystical cloak around “Milk And Honey”, while “My Name Is Carnival” is darker still, his equivalent of Jansch’s similarly gaunt “The Bright New Year”.

However, as much as Frank fancied himself as a poet, the great buttresses on which his reputation rests are his least writerly songs. Denny later banshee-wailed her way through closer “You Never Wanted Me” (“He broke her heart,” says Thompson), but Frank’s autopsy on a lost love is supremely, sublimely restrained. And then there’s “Blues Run The Game”, the fatalistic sentiment of which followed Frank through his declining years like the Mona Lisa’s eyes.

Chronic writer’s block and worsening mental problems conspired to ruin him. “I didn’t see him – well, not alone anyway,” recalls Thompson of his later-’60s return to London. “He and Sandy didn’t keep in touch. Jackson was sinking fast, and friends jumped ship. You couldn’t deal with him.”

Settling in Woodstock, Frank got married and had two children, but after his son died young of cystic fibrosis in the early 1970s, he deteriorated further, later vanishing on a windmill-tilt at finding Simon and rebooting his career. He was not seen again until a fan, Jim Abbott, tracked him down in Queens. “There was this heavy guy hobbling down the street, and I thought that can’t possibly be him… I just stopped and said, ‘Jackson?’ and it was him. My impression was: ‘Oh my God.’ It was almost like the Elephant Man or something. He was so unkempt, dishevelled.

“All he had to his name was a beat-up old suitcase and a broken pair of glasses. I guess his caseworker had given him a $10 guitar, but it wouldn’t stay in tune. It was one of those hot summer days. He tried to play ‘Blues Run The Game’ for me, but his voice was pretty much shot.”

Indignity was to follow indignity. Listening to the weary tunes he laid down here, you can almost believe he saw it coming.
Jim Wirth