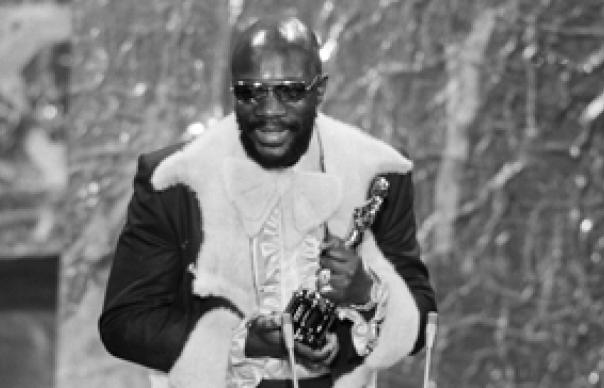 At the 1972 Academy Awards it wasn’t quite business as usual in Tinseltown. The Godfather, a movie by a little known New Yorker, dominated proceedings and duly won Best Picture. Then there was Isaac Hayes – the first black musician to win an Oscar for best song, performing “Theme From Shaft” for the tuxedo’d throng in trademark style – shaven head, shades and bare torso draped in chains. “Raindrops Keep Falling On My Head” it wasn’t. Instead, Hayes’ sizzling slice of ghetto life confirmed that at 29, amid a mob of talents that included Marvin Gaye, James Brown and Sly Stone, Ike had become the most successful black man in showbusiness.

In the same month that Hayes collected his Oscar for “…Shaft”, whose edgy wah-wah guitars had already topped the single and album charts, he released Black Moses, the most lavish example yet of his extravagant style. A sprawling double album, it came lodged in a cover that unfolded into a giant cross framing the one-time Memphis meat-packer as an Old Testament prophet, clad in Biblical robe and, uh, wraparound shades.

Hayes, a devoted Christian, initially fought the ‘Moses’ tag bestowed on him by an excited minder – “I was kicking and screaming all the way” – but he came to see it as another example of black pride. Ike was already a muscular icon of black sexuality – at a time when most of black America was sporting shoulder-wide Afros, he had made bald beautiful: “Bald is as black as you can get,” he asserted.

…Moses used much the same formula that had gilded Hayes’ three previous LPs, Hot Buttered Soul (1969), The Isaac Hayes Movement (1970) and …To Be Continued (1971), spreading Ike’s creamy crooning over lush orchestrations that built at an almost funereal pace, the proceedings interspersed with spoken ‘raps’ in Ike’s rumbling baritone. Its oily bedroom balladry would soon become a cliché in the hands of Barry White and Teddy Pendergrass, but Hayes brought real musical smarts with him. As house writer and producer for Stax records he had, alongside partner David Porter, presided over landmark hits by Sam and Dave, Otis Redding and Eddie Floyd. That his own records took an opposite turn to Stax’s normal zest reflects Hayes’ limitations as a vocalist, but also his teen idolatry of black sophisticates like Nat Cole and Sam Cooke.

As previously, on …Moses Hayes mixed up the material he put through his orchestral mincer – ‘vanilla’ hits like The Carpenters’ “Closer To You” alongside black pop like the Jacksons’ “Never Can Say Goodbye” and lesser-known soul pieces like Curtis Mayfield’s “Man’s Temptation”. This time, though, his choice, was not mere calculation, but a reflection of his emotional circumstance as he faced the break-up of his marriage. At one point – perhaps on “Nothing Takes The Place Of You”, a 1967 hit for Toussaint McCall, he even summoned his secretary into the studio to focus on as he sang, tears streaming.

If the climbing arpeggios of “Nobody” recall Otis Redding’s “These Arms Of Mine”, Ike’s delivery suggests the velvet baritone of Brook Benton, like Cole a jazz-tinged balladeer rather than a ’60s “Soul Man”. There’s surprisingly little grunt and grind here – Ike belonged to an older tradition. What he brought to the ’70s party, apart from sheer chutzpah – the gold Cadillac, chains, and 40-piece orchestra – was sonic nous, the ability to play an entire studio and to integrate technical innovations like fuzztone and wah-wah guitars.

Despite its Grammy-laden status, much of …Moses sounds windy and saccharine today. The nine minutes of “Close To You” are several minutes too long. The raps, always delivered tongue-in-cheek, often turn merely hammy (“Before I met you I wasn’t living, just existing”), and the female back-ups are plain silly on Kristofferson’s “For The Good Times”.

Still, Ike put down a marker. It’s hard to imagine Philly Soul – think “Me and Mrs Jones” – would have arrived without his lead, or to conceive Jazzy B inventing Soul II Soul without a template like “Good Love”.

Hip hop’s scavengers, needless to say, have endlessly plundered his back catalogue for riffs and samples. Black Moses would prove to be Ike’s apex – unless you count “Chocolate Salty Balls”, which of course you don’t.

This is a monument to a preposterous, regal age of soul. Bend the knee.