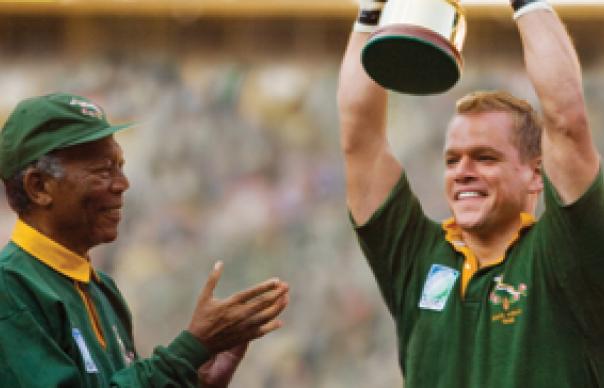 The 1995 Rugby World Cup final was, to most viewers around the world, just a pretty good game. To South Africa, who beat New Zealand 15-12, it was a momentous historical occasion, helping to heal deep wounds and invest blacks and whites alike with a spirit of hope. A great big symbolic handshake, if you like. Nelson Mandela had invested a lot of his political capital – unwisely, many thought – in urging his country to get behind their team, the Springboks, previously loathed by black South Africans as a potent symbol of apartheid. “Forgiveness liberates the soul,” declared Mandela. He was fortunate, you might argue, that the team, led by Francois Pienaar, improved beyond recognition in the months leading up to the event, providing the story with a classic against-the-odds climax and the kind of ending that makes sports movies so disarmingly uplifting.

Eastwood will have borne this in mind: there are few directors who could have got the green light from a US studio to make a major film about a foreign leader and a foreign sport in a foreign country. Yet if the final third of Invictus is (extremely well shot and choreographed) gung-ho jock action, the first two thirds are a thoughtful examination of Mandela’s early years in power and the problems he faced in appeasing both sides of an argument. It’s possible that Eastwood saw parallels between Mandela’s struggles and those of Obama in the US today: matching unrealistic expectations while avoiding alienating half the country (though this is kept implicit.) He bravely displayed with Flags Of Our Fathers and Letters From Iwo Jima that he’s aware that most issues have two sides. Here, he makes his first “political” film (albeit one that resolutely refuses to question received history), and revisits the sporting world for the first time since Million Dollar Baby.

The strange marriage is conservatively boxed – as a director Eastwood is a master craftsman, but no visionary – but oddly effective. The opening scenes suggest something more incendiary. As Mandela’s motorcade passes in 1990, a white South African grumbles to his son, “This is the day our country went to the dogs.” Civil war remains just a shot away. Mandela has a tough job “balancing black aspirations and white fears”. Facing flak for spending too much time overseas, he learns about the scale of the forthcoming World Cup, which South Africa is to host, and his eyes light up. “A billion people watching us? This is a great opportunity!”

Morgan Freeman, who bought the screenplay rights, was Mandela’s choice to play him, and persuaded Eastwood to direct. His performance is not ideal, however. Maybe he has the accent, mannerisms and speech-patterns spot-on, but he never convincingly becomes a physically smaller man. Indeed, even at 72, he seems too proud, too perky. Moments that should resonate, revealing Mandela’s dislike of bright light after 27 years of incarceration, or of others subserviently pouring his tea, are laid rather thick. Winnie Mandela is sidelined completely. And some of Mandela’s glee at the timely sporting fillip makes him seem like a keen-eyed PR guru on a charm offensive, rather than one of the greatest martyrs of the 20th century.

Nonetheless, the build-up holds. Mandela invites Pienaar to meet him and impresses him with his desire for a uniting cause. It’s unclear how this chat led to a team that were used to being roundly beaten suddenly improving into fearless world-beaters, but, despite a script laden with clunky extrapolation, Eastwood maintains momentum. Eschewing, in the main, “inspirational” montages, he has Mandela send the team to the townships, where, in coaching black boys, they develop morale and togetherness. Matt Damon is a strange piece of casting – Pienaar was a blond hulk of a man, several inches taller – but the actor’s innate likeability helps, as does the knack he’s shown in several recent films for shrewd understatement. Pienaar’s family, like the media, retain doubts, yet as the team start winning on the pitch these are cast aside. The one black player is lionised. Even in England we know this is plausible – in Sport World, zeroes become heroes overnight (and vice versa). Yet it’s also why the film, for all its merits, leaves you unfulfilled. Is the giddy, fleeting, escapist euphoria of sport a viable symbol for a watershed in politics and race?

Two key decisions by Eastwood lend the tale gravitas. Mandela presents Pienaar with his favourite poem, “Invictus” (which roughly translates as “unconquered”) by Victorian poet William Ernest Henley. It was the poem that Mandela said helped to get him through his years in jail, and the film’s best off-the-pitch scene sends the team on a boat to Robben Island to visit his old cell. It’s a very moving, quiet sequence, and Damon plays it brilliantly, almost involuntarily stretching his arms out in awe at how small the cell is.

It’s contrasted with the size of the rugby stadium, which now becomes our arena for the run of games that see South Africa’s team grow from underdogs to finalists. The population, swept up, gets behind them. The atmosphere is as good as any sports movie ever made. For obvious reasons, rugby’s faint similarities with American football are amplified when possible. And after Pienaar has uttered cringe-worthy pep talks like “This is it, our destiny” and even “Not on our watch”, it’s a small irreverent joy when, facing the “unstoppable” All-Blacks and star player Jonah Lomu, he gathers the players into a huddle and growls, “Just hit the fucking guy.”

That the team’s triumph bonded a populace more swiftly than years of diplomacy is undeniable. Equally indisputable is that South Africa today is again a mess of corruption and distrust, and this isn’t addressed. Eastwood has opted for the “greater good” theory. Showing men at their best, be it the saintly Mandela or the victorious players, he smuggles a compressed take on “the Nelson Mandela story” into being. And perhaps encourages many to want to learn more about what happened either side of this glorious moment, expertly brought to life again.