Interpol – Our Love To Admire

High-gloss post-punk primed for the world's stadiums; plus Q&A with Kessler and Banks 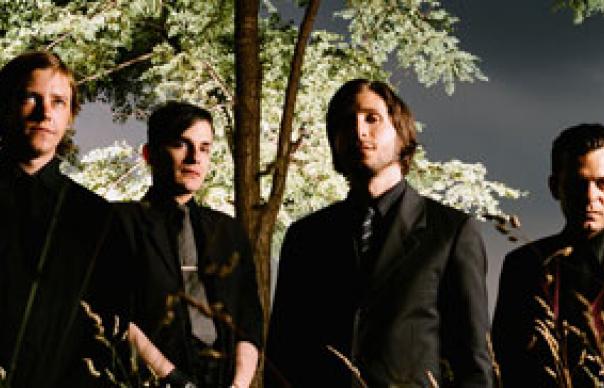 Interpol, to lapsed punks of a certain age, must look like a Not The Nine O’Clock News parody of a post-punk band. Geeky yet sinister, imperious to the point of self-parody, their skinny ties, armbands and Hitler Youth haircuts seem stuck in a peculiar vintage of rock history. They recall a time when miserable young men from the north of England were staring into the mid-distance, and wearing long trenchcoats.

Now Interpol’s doom-laden vocals, choppy guitar riffs and wiry, hypnotic basslines find themselves providing the soundtrack to the ongoing post-punk revival, as a whole generation of teenagers and twentysomethings continue to party like it’s 1979. The New York quartet, now in their tenth year and on their third album proper, were at the forefront of this New Wave of New Wave, sneaking in before other pale, literate, wasp-waisted young men like Franz Ferdinand, Editors, The Departure, Bloc Party and Hot Hot Heat, could get on board.

Unlike most of these likeminded revivalists, Interpol found many post-punk legends dutifully reciprocating their affections: Robert Smith, Bernard Sumner and Peter Hook have all cited them approvingly, REM have covered one of their songs (the beautifully bleak “NYC”, from Interpol’s first album), and a recent low-key London gig attracted dozens of premier league guitar bands, all joining Coldplay, Gwyneth Paltrow and the Primrose Hill mob.

Britain’s enthusiastic embrace of Interpol has much to do with the band’s perceived Anglophilia. Both singer Paul Banks and lead guitarist Daniel Kessler were born in Blighty and moved to the States as children; John Peel was an early champion of their work, some of which was released on the British imprints Chemikal Underground and Fierce Panda; while singer Paul Banks’s blank-voiced holler is often compared to that of Joy Division’s Ian Curtis and The Chameleons’ Mark “Birdy” Burgess. And, like the two previous albums Turn On The Bright Lights and Antics, Our Love To Admire borrows much of its nervous energy from several obvious English forebears: Echo And The Bunnymen, The Cure, Kitchens Of Distinction, Psychedelic Furs and early Banshees, as well as Joy Division and The Chameleons.

The key difference is that Interpol, as Americans, aren’t hampered by the low-key provincialism that stifled the ambitions of much British post punk. Our Love To Admire – their first album for a major label – suggests that Interpol are primed and ready to complete the leap into the arena circuit, a move that Echo And The Bunnymen, for instance, never felt comfortable with. It’s a majestic, grandiose, machine-tooled album, subtly orchestrated with gothic pianos and doomy organs.

In terms of scale and dynamics, it shares much with U2 and Simple Minds (The Edge’s epic, cinematic guitar style has always been an unacknowledged influenced on Interpol’s Daniel Kessler) but where those Celtic rockers only started to hit stadium dimensions by jettisoning post-punk’s depressive tropes (betrayal, angst, distrust, paranoia, claustrophobia, etc) and adopting a positive, evangelical fervour, Interpol retain Joy Division’s monochrome, self-loathing template and yet make it sound bigger than Bono. This is truly navel gazing taken to giant proportions; a Fassbinder film being made on a Jerry Bruckheimer budget.

The opening track “Pioneer To The Falls”, with its doomy gothic keyboards, spellbinding tremolo guitar solo, and Augustus Pablo-ish line played on an oboe, shows how the quartet have moved on from the bare bones of their earlier albums. This is not a retread of Antics, it is a massive upgrade, an album where the songwriting, production and arrangements blow even Antics’ highpoints like “C’Mere” and “Slow Hands” out of the water. And never mind the Ian Curtis comparisons – drummer Sam Fogarino, shrouded in gated reverb, shows that he has effectively absorbed the dub sensibility that Martin Hannett lent Joy Division.

Banks’s lyrics are starting to read like mini-screenplays. The pulsating lead single “The Heinrich Maneuver” – with its bitchy opening riposte “how are things on the West Coast?” – is a complex bicoastal break-up song, delivered in the style of an urbane New York University undergrad addressing his dissolute Californian ex; like a Woody Allen plot scripted by Ibsen. “Today my heart swings” lies the narrator, through tears of rage. It segues elegantly into the thrillingly upbeat “Mammoth” which sounds like a Smokey Robinson song of lost love being narrated by Ian Brady, its cheery Motown drum beat subverted by Banks’s sinister delivery.

Post punk’s most rigorous theoretician, Green Gartside of Scritti Politti, was clearly talking about Interpol when he remarked that today’s post punkers (“with names like The Cavalry Twelve and Armpit”) display “no sense of trepidation” in their music. Yet Interpol use this to their advantage. You could categorise them as Magazine without the clumsy sonic adventurousness; The Chameleons shorn of the endearingly shoddy rhythm section; Gang Of Four without the hamfisted militancy. And each time you may be right. Our Love To Admire takes some of those bands’ ramshackle sonic weaponry and converts them into clean, sleek, armour-plated missiles, handling them all the time with an assured military swagger. No wonder the four of them look like they’re ready to invade Poland.

Q&A with Daniel Kessler and Paul Banks from Interpol
The album sounds much more orchestral and ambitious than Antics…
Daniel Kessler: On the first two records we wrote all the songs with drums, bass, two guitars and vocals – all the instruments that we could physically play in the moment – and then use keyboards as a final touch, to provide texture, atmosphere, warmth and so on. This time we wrote all the demos on a sequencer and keyboard set up, so those piano and organ sounds were written into the songs from the beginning. So, if it does sound more epic and orchestral, it’s quite organically so.
Paul Banks: We’ve also tried to use lots of sounds that listeners wouldn’t know if they were keyboards or guitars or what. There’s a sound on the first track there’s a melody being played on an oboe. At the end of “The Scale” there’s a crazy, fucked up sound that could be anything. It’s actually being played on guitar, with an Ebow. That was me. That was fun.

You’re known for having a curiously democratic songwriting method…
Daniel: I write the basic progressions – verse, chorus, bridge, and so forth – for the songs in my house on a classical guitar, and then I bring my Dictaphone recording of them to the band. Carlos will usually think about the melodic and tonal possibilities. Paul or Sam might take it in a different rhythmic direction. The key is that we always have an equal say in how it’s going to go. Every song is filtered through four people.

Is it true that bassist Carlos Dengler listens to nothing but classical music?
Daniel: He certainly listens to a hell of a lot. He also composes music in that style, as a side project. We all listen to a lot of orchestral music, actually. When you’re making a rock record it’s good to have something neutral as a reference point.

What are you listening to at the moment?
Daniel: We don’t listen to music collectively, it much more private, iPod kind of thing. Right now I’m liking the Battles records, Bonnie Prince Billy, Joanna Newsom, Blonde Redhead and Burial. Everyone listens to different stuff. I know that Paul listens almost exclusively to hip hop…
Paul: I listened to hip hop long before I got into rock. Straight Outta Compton by NWA was the first album I got crazy into. I listen to a lot of Jay Dilla too. I find the production on hip hop albums so clean, so beautiful, so satisfying. I also listen to a lot of jazz and classical music. Cecil Taylor’s pretty cool.

Is there any significance to the fact that two of the band were born in England?
Paul: If it affects anything as an artist, it’s that you’re growing up in a foreign country. Daniel’s mum is English, both my parents were English, and they were foreigners in America. And both me and Daniel had to sort of relearn English as kids when we came here. So we both have this strange relationship to our surroundings. We’re Americans with a slightly altered internal environment.

U:What’s the biggest non-musical influence on your songwriting?

Daniel: Virtually every song I’ve ever written has started while I’m watching a film. I tend to start the day by watching a DVD. At that time in the morning, there’s something very meditative about getting immersed in a movie, and I find that conducive to creativity.

Paul: I find myself oddly influenced by architecture. Especially in New York, where you’ll get a 300-year-old church standing six inches from a glass skyscraper. It’s jarring, but those contradictions and incongruity are part of the nature of the city. It’s there, that’s how it is. So my lyrics tend to celebrate that aggressive change of tone, the lack of sequence, the fact that something so