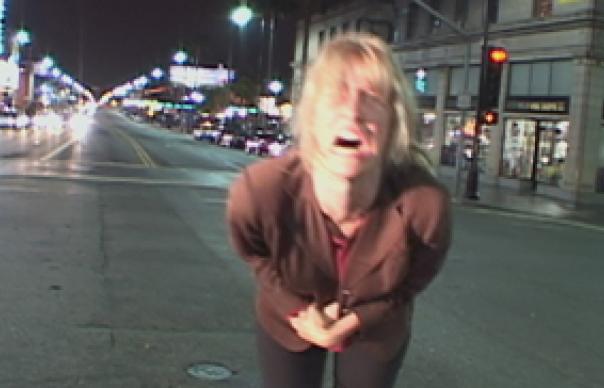 Increasingly it seems that David Lynch doesn’t produce discrete films so much as revisit and remix episodes, over intervals of years, from the same long, lurid nightmare. For this latest installment he recasts Laura Dern, Justin Theroux and Harry Dean Stanton from his established repertory, recaptures the bad-dream logic of Eraserhead and revisits the haunted Hollywood lots of Mulholland Drive.

Precis flounders in the face of the film’s twisty temporality, but it seems safe to say that Dern starts out playing Nikki Grace, an actress who wins a part alongside Theroux in On High In Blue Tomorrows, a movie to be directed by Jeremy Irons. Before shooting begins it becomes apparent that the production is actually a remake of a prior film, based on a Polish folktake, that was mysteriously abandoned. It’s said that the movie was cursed, the leads were murdered, that “they discovered something in the story”…

Bewitched by the melodrama of the script, Dern falls for her leading man, and from this point, well… reality, movie and dream become ineluctably scrambled. Dern walks down dark corridors, through strange doors, into other rooms and other lives: the set of Blue Tomorrows, the wintery streets of Poland, a sinister brothel and the star-spangled sidewalks of Hollywood and Vine. Occasionally the action cuts to scenes from Lynch’s absurd online sitcom, Rabbits, and a Polish woman in a purgatorial hotel,
weeping in front of a TV – perhaps hopping endlessly, desperately between the many channels of the film. Although INLAND EMPIRE begins with a shot of projected light and a gramophone needle, it’s essentially a long, indulgent lovesong to new media, Lynch revelling in the freedom offered by cheap digital video.

What’s it all about? Lynch will say only it’s about “a woman in trouble”. I’d say it’s an epic, sentimental hymn to the redemptive power of actorly make-believe – in particular, the astonishing performance here of Laura Dern – to burn through the labyrinthine chicanery of Hollywood, like a cigarette through a screen of silk. As such, though it doesn’t have the ravishing noir eroticism of Mulholland Drive, it offers some way out of that film’s brutal conclusion. INLAND EMPIRE is Lynch’s boldish challenge yet to his audience to get lost: the impatient might interpret that as the dismissal of an absurdly arrogant auteur; the curious will find it a seductive invitation.