Indiana Jones And The Kingdom Of The Crystal Skull

19 years since he last donned the Fedora, an older and slightly creakier Dr Jones is back... 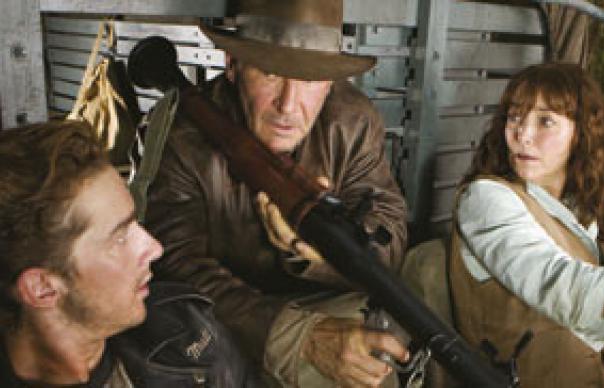 
You may remember one of the harshest, and widely circulated, criticisms dished out to George Lucas following the release of the Star Wars prequels: “Thanks for ruining my childhood, George.” For a man who was responsible for firing the imagination of a whole generation, it’s a pretty damning critique. While the Indiana Jones movies may not have quite the resonance or emotional heft of the original Star Wars trilogy, there’s still something about Raiders Of The Lost Ark, particularly, that taps into a collective childhood fantasy. Basically, if you got bored running around in your back garden with a cardboard tube having “light sabre” battles, you could always dig up your mum’s azaleas searching for mythical Judeo-Christian artefacts – possibly using your dressing-gown cord as a stand-in for bullwhip.

So has George Lucas managed to further tarnish his past glories with Kingdom Of The Crystal Skull, picking up the Indiana Jones story 19 years on from The Last Crusade?

Well, not entirely. One of the main complaints levied at the Star Wars prequels was that Lucas was more interested in computer jiggery-pokery than he was managing his cast. So while Lucas may have co-written the script and act as Executive Producer on …Crystal Skull, what we see on-screen is driven, pretty much, by director Steven Spielberg, who has a far more assured grasp than Lucas when it comes to handling actors. Spielberg is also a better action director. So, at the very least, …Crystal Skull feels more like a proper movie and less like a computer game.

The first hour of …Crystal Skull is fantastic. Moving the setting to 1957 locates it firmly in the era in which Spielberg and Lucas grew up. So we get something that actually feels quite personal: the diners, jocks and greasers Lucas visited in American Graffiti, we get Area 51 and by extension the sci-fi B-movies they loved as kids. And we get The Bomb. In one of the film’s stand out sequences, Indy is on the run from Russian baddies and finds himself in a fully functioning village built by the US army within the blast radius of an atom bomb test to gauge the effects of a nuclear explosion on civilian conurbations. Here, Indy finds himself going from house to house, finding mannequin families sitting on sofas watching TV, freezers stocked with real food, cars in the street, everything silent and eerie. When the bomb detonates, Spielberg’s replication of the flash of light, the sonic boom and the mushroom cloud is brilliant – reminiscent of the atom bomb blast in Empire Of The Sun – and dovetails with the nuclear threat that overshadowed his and Lucas’ youth.

If this evocation of their own adolescence drives, to some degree, the first hour, Spielberg and Lucas’ happily revisit familiar tropes from their own films, especially their ongoing fascination with aliens. The opening shot of the Paramount logo, for instance, dissolves onto a prairie dog hill in the desert, a small monolith that clearly references the models of the Devil’s Tower Richard Dreyfuss made in Close Encounters Of The Third Kind. There’s more, too, but I don’t want to go into too much spoiler detail here.
The second hour, though, as fantastically exciting, shot and edited as it is (particularly a breathtaking 15 minute car chase through the jungles of Peru) feels incredibly familiar. Snakes, quick sand, temples with tricksy traps, angry natives, the deus ex machina… We’ve been here before, surely?

Maybe all this is reassuring to fans of the series, but it flags up the finite pleasures of Indy’s universe. However much gee-whizz fun Spielberg has on the way, hitting the accelerator and throwing everything in his formidable bag of tricks at the screen, there’s a creatively restrictive template in place. And no-one seems too bothered to jive with it.
It’s the most kinetic, but conversely, the least exciting part of the film. It also means that the strong supporting cast – Cate Blanchett as Russian villainess Irina Spalko, Shia LaBoeuf as Mutt, the son of Karen Allen’s Marion Ravenwood, Ray Winstone as Indy’s sidekick Mac, and John Hurt as a family friend – get sidelined, there either to provide clunky narrative exposition or repeatedly find themselves imperilled.

At least five writers have made passes at a screenplay for this movie since 1989 – including Frank Darabont and M Night Shyamalan – before Lucas, Spielberg and Harrison Ford settled on one from Jurassic Park and Spider-Man writer David Keopp. I have to admit I find Keopp an incredibly programmatic writer, a notion that he in no way disabuses me of here. I’d much rather have seen someone like Darabont tackle the script – sure, Shawshank Redemption is one of the most overrated films ever, but at least Darabont has a greater understanding of character dynamics than Keopp ever will.

Of course, the key dynamic here is between Indy and Mutt, the grumpy old man versus the hot-headed kid. It’s fairly reductive characterisation, but Ford and LaBoeuf manage to wring some pathos and humour from Keopp’s script. There are plenty of predictable jokes predicated around Indy’s age, but Ford does harassed exceptionally well. I’ve always thought he had something of the Cary Grant in North By North West about him; he’d have been a brilliant Hitchcock hero, something Polanski touched on in Frantic.

So, did it live up to expectations? Lucas and Spielberg delivered, certainly, an Indiana Jones movie. It may not touch the greatness of Raiders…, but it’s a long way better than The Last Crusade. If only it had all been as good as the first hour, then we’d be looking at a four star movie.

Plus! There are over 1500 archived film reviews in the UNCUT.CO.UK film section! check them out here at uncut.co.uk/film/reviews