I NEED THAT RECORD! 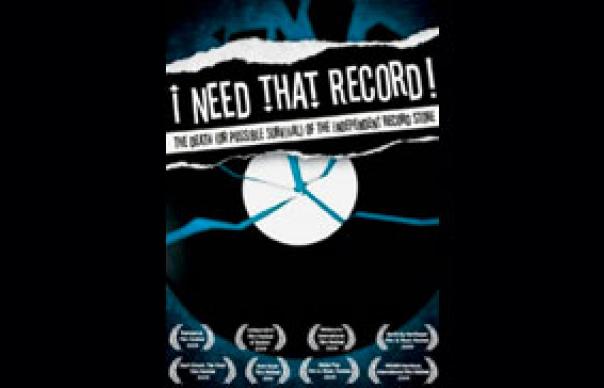 Brendan Toller’s engaging essay-film is a direct response to an unexpected extinction event of the past decade: 3,000 independent record stores have closed down in the USA alone.

By launching a two-pronged attack on the problem – meeting record store employees and customers in situ, and analysing the backstory of the wholesale restructuring of the American music industry since the 1980s – he manages to provide a rounded and quietly impassioned elegy for the kind of self-supporting yet fragile communities which independent stores bring into being.

Along the way, Toller interviews various leftfield rock icons, including Fugazi/Dischord’s Ian Mackaye (brutally realistic), Thurston Moore and Chris Frantz (genially articulate), Mike Watt (incoherent), Legs McNeil (cynical) and Glenn Branca (cantankerous). Lenny Kaye explains how he actually met Patti Smith while they were both browsing in their local indie record booth, and there’s the unspoken reminder of how many groups have formed through in-store notices.

But the real heroes and heroines of the story are the store owners and staff, who are painted as tireless Canutes, embattled against an oceanic sea-change in the business of selling entertainment. He begins at Record Express, the Connecticut neighbourhood record emporium that Toller used to frequent. Owner Ian is clearing his racks and sweeping up, forced out due to rent hikes and dwindling business, as he explains over choked-back tears. Meanwhile, the charismatically combative Malcolm from another CT store, Danbury’s Trash American Style, explains how a local print-shop owner has just elbowed them out of a 20-year lease, while his customers mourn its passing: “It’s like when your best friend’s moved away to a far away land, and you can’t buy a plane ticket to go there,” says one. It’s more than just the closure of a record store, it’s the dismantling of an unofficial but tangible underground society. “A part of the culture,” insists Toller, “that can’t easily be regained.”

How did this come to pass? Toller’s argument begins with President Clinton’s deregulation of radio station ownership in 1996, which led to Clear Channel owning one in 10 radio stations in the US, blanketing them with homogenised playlists. Wal-Mart, he goes on to say, has become the US’s biggest record retailer, with one in every five CDs sold there.

Cumulative factors such as MTV, loss-leading CD prices by big-box retailers, even the legendary superciliousness of indie-shop staff are cited as factors, along with the inevitable role of the internet. Noting that ‘entrepre-nerd’ Michael Robertson only owned six CDs at the time he set up the controversial mp3.com, the film acutely observes the way download culture, with its defensive firewalls of legal protection and enforcement, has promoted a widespread antagonistic attitude to record labels rather than the kind of loyalty that might have characterised earlier generations of music lovers. With digital becoming the dominant delivery model, the prospects for future record collectors is, as Thurston Moore puts it, a “lonely and boring” experience rather than one involving community and fellowship. Theoretical heavyweight Noam Chomsky is roped in to point out the similarities with the way supermarkets sucked up the customer-base of small grocery stores. “The system is designed for isolating people,” he says.

Toller has worked hard to structure his film to maximise the impact of his story, and the analytical sections are seamlessly woven in among the talking heads. Matt Newman’s animations provide appropriately cut’n’paste counterpoints to the footage, and a post-punk soundtrack throbs throughout (the title track, by The Tweeds, is a celebratory slice of 1980 disc-junky power-pop).

The film’s subtitle is ‘The Death (Or Possible Survival) Of The Independent Record Store’. It might have been useful to have gleaned, from shops that are surviving, how to keep heads above water. As it is, I Need That Record! is about more than just the death of the record store. It laments the passing of a state of mind.