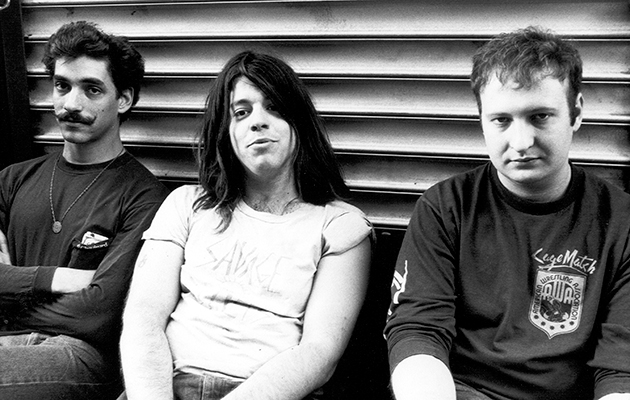 The last two decades have been open season for the band reunion, a phenomenon that has seen all manner of broken relationships and battered egos salved by the prospect of lucrative comeback tours and a thriving reissue market eager for new ways to package the past. For all this, there have been a few holdouts, groups for whom no cheque could paper over the cracks. The Smiths, for one. Talking Heads, another. And of course Hüsker Dü, the prolific Minnesota punk rock trio whose collapse on the road in 1988 after nine years and six furious albums amounted to one of the most acrimonious splits in rock.

In the years hence, the trio continued with new projects – most notably, Bob Mould’s Sugar, a sleek, commercially solvent update on the Hüsker Dü template, and a string of solo albums from drummer and co-vocalist Grant Hart that explored bold conceptual realms (2013’s The Argument was inspired by Milton’s Paradise Lost). There was the briefest of reunions in 2004, when Mould and Hart came together at a benefit concert for Karl Mueller of Soul Asylum, playing a couple of Hüsker Dü songs, before informing the audience not to hold their breath for more. But the promise of a Hüskers reunion was never entirely dispelled, and the news in 2015 that Mould, Hart and bassist Greg Norton had opened collective communications – if only to sell T-shirts from an official website – raised hopes anew.

Any lingering ‘what if?’ was blotted out forever in September, when Hart succumbed to a battle with liver cancer. It is difficult to imagine Hüsker Dü lacking any of its three core members, but in particular, the dynamic between its two songwriters is the fulcrum the band revolved on: Mould, intense and buttoned-down, his songs caustic and bitter; Hart, hippyish and energetic, with a generous melodic sense and a taste for raw, confessional songwriting. If their relationship could sometimes feel competitive, a sort of Lennon/McCartney one-upmanship, it certainly worked in the service of the songs. “You hear some live bootlegs, and Bob and I are working so hard to outshine each other that it just lifts the whole thing off the ground with peace and wonderfulness,” Hart told The AV Club in 2000.

Just two months on from Hart’s death comes Savage Young Dü. A 69-track boxset collecting freshly remastered and largely unheard music from Hüsker Dü’s first five years, it captures the group in first flush, evolving from green teenage punks rehearsing in the basement of St Paul record store Northern Lights into a savagely tight and notoriously fast power trio, cutting a swathe through clubs across North America. That Hüsker Dü were real road dogs is sometimes forgotten, but a thorough hardcover book packaged with the box lays out their hectic live schedule through tour dates and a wealth of photos and hand-written flyers –countless support slots at Minneapolis venues, extensive sorties along the West Coast, all the way down to Texas and all the way up to Canada. Some hardcore bands were strictly local heroes, but not Hüsker Dü. Like Black Flag before them, they were DIY networkers, building their reputation and honing their sound out there on the road.

So what’s here? Of the familiar stuff, we have the group’s debut single, “Statues/Amusement”, the A-side an uncharacteristically slow post-punk lurk with spiky Keith Levene-style guitars; a newly mixed recording of second single “In A Free Land”, warp-speed hardcore with a thrilling anti-authority vocal from Mould; and the group’s debut studio album Everything Falls Apart, a 12-track charge that sometimes holds tight to the hardcore template (“Bricklayer”, “Afraid Of Being Wrong”) but throws in some wild cards along the way. The title track buries a brilliant array of melodies amidst its mopey, greyscale guitars, while a surprising cover of Donovan’s “Sunshine Superman” is played not for the hyucks, but for the hooks. Careful remastering throughout makes the melodies crisper and the noise crunchier.

And what’s new? Primarily, there’s a new take on the group’s 1981 live album Land Speed Record. Like the original, it’s taken straight from the soundboard at Minneapolis venue 7th Street Entry. But this take was recorded a couple of weeks later, with Hüsker Dü fresh from a tour that saw them play bills with a stack of hardcore groups from up and down the West Coast. Land Speed Record was already fast – the title says it all – but here you can hear the trio pushing themselves further and further, faster and faster, keeping it together even as they dare the songs to fall apart. There are hints, too, of a musical scope reaching beyond that of their punk peers. “It’s like free jazz,” Hart says in the sleevenotes. “When you listen to the whole thing – the gestalt of the thing – there’s Bengali music, Indian music, because we were able to get this raga thing happening. That’s part of what people say was our unique hardcore sound.”

Elsewhere, there is valuable live and rehearsal material, much of it taken from the archive of the band’s live sound engineer, Terry Katzman. An early show recorded at Minneapolis venue Jay’s Longhorn captures the group in vestigial form – the Norton-sung “You’re So Obtuse” might be considered new wave, if it wasn’t for Hart’s chaotic drum batteries, while an appropriately bug-eyed song called “Insects Rule The World” closes with a great Hart public service announcement: “We’re not the most professional band in the Twin Cities… we have fun though…” An early 1980 session spawns a breathless take on Johnny Thunders standard “Chinese Rocks”, while lost Mould originals like “Stick It To Me” show how the group were exploring pensive, introspective material in rehearsal, even as their live shows were gaining in speed and intensity.

But probably the most thrilling material comes towards the box’s close. Live takes on “Real World”, “It’s Not Funny Anymore”, “Out On A Limb” and Hart’s harrowing serial killer fable “Diane” – all of which would appear on the band’s debut release for SST, Metal Church – mark the band truly arriving at their signature sound: a raging tug-of-war between the fulsome melodies and thematic broadness of classic rock, and the pent-up range and pedal-to-the-metal pacing of hardcore punk. There is the slight sense that Savage Young Dü cuts out just as things are getting good, but that’s more than countered by the quantity of material here, and the promise of what else might be to come.

That Savage Young Dü exists at all is surely in large part to do with Hart. When Ken Shipley at Numero Group first contacted him about piecing together Hüsker Dü reissues back in 2010, the drummer was initially sceptical, but his increasing enthusiasm for the project proved crucial, even as his illness sapped his energy. “When plans were made to fly out to the Museum of Pop Culture in Seattle to pour through his archives, he wanted to join,” recalled Shipley. “But when it came time to go, he suddenly cooled to the idea and withdrew from the project entirely. ‘Can you get it out before I go?’ he asked.” It was not to be, but Savage Young Dü stands as some testament to his wild, energetic creativity, and the protean energy of the band that first brought his songs to the world.