Rocking against all odds - the story of Acrassicauda 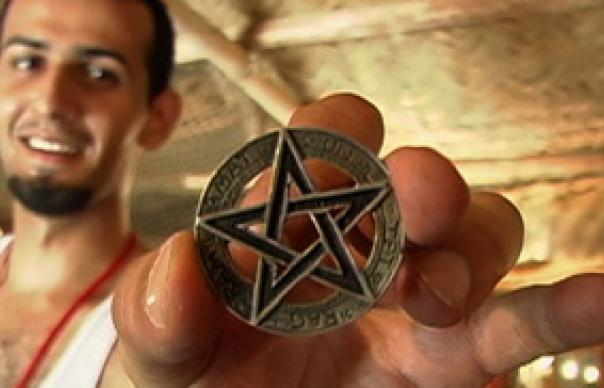 “This is what life looks like here,” says the goateed young man in the black t-shirt. He’s holding up a copy of the cover of Iron Maiden‘s Death On The Road album.

As a snapshot, it neatly summarises the virtues of this documentary on Iraq’s only metal band, Acrassicauda. It’s smart, perceptive, balefully funny, at once heartbreakingly absurd and weirdly inspiring. Heavy Metal In Baghdad, by Canadian journalists Eddy Moretti and Suroosh Alvi, grew from an article about Acrassicauda that appeared in Vice magazine shortly after the 2003 invasion of Iraq. Shot over three years, the film addresses the story since, venturing to Acrassicauda’s hometown and following them into exile in Syria. The central narrative is self-evidently compelling, but the details collected on the way subtly amount to one of the most vivid portraits of the Iraqi conflict yet created.

It helps that Acrassicauda’s principals – Firas (bass), Tony (lead guitar), Faisal (vocals), Marwan (drums) ? are smart, thoughtful and infused with the droll wit that is a consolation of all war zones. They recall trying to be a metal band under Saddam Hussein. They needed permission for gigs from the Ministry of Culture, that was extended only on condition that they perform an encomium to the president, and refrain from headbanging – which was, it was officially felt, disconcertingly evocative of Jews at prayer. Their assessment of the shambles that has surrounded them since 2003 could have come from any of the millions of rarely-reported Iraqis who meant, and mean, no harm to anyone: “You got the troops and the terrorists outside, and we’re stuck in the middle.” Moretti and Alvi bring gripping intimacy to the story by flaunting the logistical nightmares that beset their subjects – power cuts, roadblocks, crossfire – and themselves. It speaks volumes, for instance, about post-war Baghdad that a dozen-strong armed bodyguard is a necessary accessory to a routine exercise in documentary journalism.

Songs about war are almost as familiar a staple of rock’n’roll as songs about love. Possibly for that reason, it’s often forgotten that rock’n’roll actually created in conflict conditions is a relatively recent development. It wasn’t until the Balkan catastrophe of the 1990s that war befell a place where rock was an established part of the native culture – Sarajevo in particular found some refuge from its four-year siege in a remarkably fecund wartime rock scene. It remains to be seen whether or not Acrassicauda, now resident in Istanbul, will amount to much on their own terms, but it’s impossible to argue with the rationale they advance for their urge to rock: “We are living,” explains one of them, “in a heavy metal world.”