Hard-Fi – Once Upon A Time In The West

The sound of the suburbs: Leone inspired second album from Staines Asbo Rockers 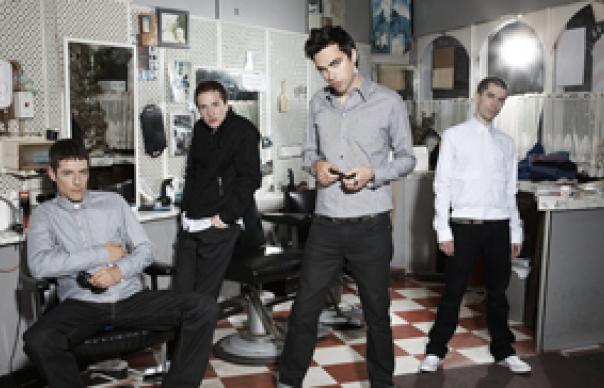 With Stars Of CCTV still providing the soundtrack to bloke-ish endeavours from Top Gear to Match Of the Day, Hard-Fi have the ear of an audience Oasis once considered their own: young, working class men with money in their pockets and a gnawing dread that their best days are passing them by.

The challenge, then? To deliver a second album which bottles the zeitgeist in the same way Oasis did with ‘What’s The Story?(Morning Glory)’, whilst flattening aggro-pop opposition ranging from Razorlight to The Enemy along the way.

Once Upon A Time In The West – recorded at the band’s own studio and buffed to a stadium gloss by Spike Stent (U2, Madonna) – all but blows a fuse in the attempt. A musical smash’n’grab taking in rock guitars, stomping Motown choruses, pulsating electro beats and sinister Morricone strings, it’s a forty-minute joyride through urban Britain delivered with a white knuckle intensity.

Clash-like Opener “Surburban Knights” sees Richard Archer declare: “They say we are at war/ But we ain’t got time for that/ Cos those bills keep dropping through my door” over an unstoppable bounce-beat skank. Stranglers-esque thrash “I Close My Eyes” sees him snarl: “The boss is in my face!” with a fury to impress even a young Paul Weller. If the rabble-rousing is clumsy at times (not least in “Can’t Get Along” where he hollers “I took smack so I could get high” – move over, Pete Doherty) at least it’s not all born out of repeat viewings of Nil By Mouth.

“We Need Love”, inspired by Billy Bragg’s book ‘The Progressive Patriot’, is a plaintive call for harmony “in county towns and football grounds” while slow-burning ballad “Tonight” comes with a tune so huge you’re almost convinced it’s a cover.
But then that’s Hard-Fi all over. ‘Once Upon A Time In The West’ may lack the cultural resonance Archer so desperately craves, but it’s widescreen appeal makes most guitar bands sound like they’re on Super 8.

UNCUT: Why the album title?

ARCHER: We had a few silly ones during recording. “Bat out Of Staines”. “Songs In The Key Of Staines”. We’d been watching the movie a lot on the bus, and it seemd to make perfect sense. We’re big Morricone fans. We go on stage to “Man With The Harmonica” each night, so it just fitted.

U: Were there any second album nerves?

RA: To start with everyone was saying to me “you can’t sing about cash machines any more”, and it did affect me. But in the end, you’ve got to listen to yourself. It’s a lot more personal than the first record.

U: Your gigs seem to end up as communal singalongs…

RA: Yeah. I know (laughs). A lot of people who come to see us aren’t seasoned gig-goers, and I think they enjoy the fact we interact with them. Most bands think they’re too cool to do that, but we don’ t care.