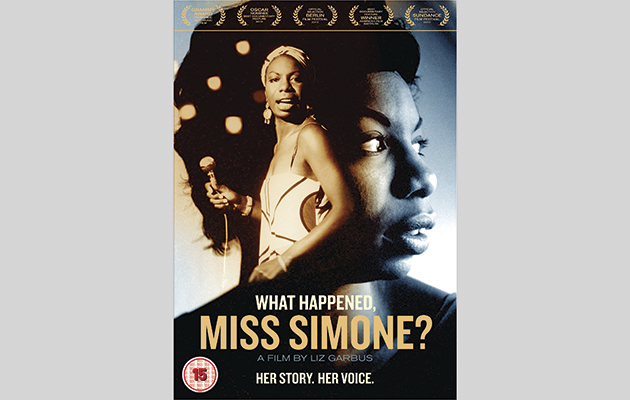 “No fear”, Nina Simone replies when she is asked, during an archive interview included in Liz Garbus’s film of her life, what freedom means to her. “No fear.” Only a few minutes into the Oscar-nominated documentary, there is already a powerful awareness of what it really meant to grow up on the wrong side of the tracks, and how that pervasive fearfulness might have affected a hypersensitive and uncommonly gifted person lacking a full complement of the layers of mental cladding necessary to protect her against a sense of injustice and persecution.

Simone became as famous for her erratic behaviour on stage as for the talent that might have made her the first black female classical pianist to play at Carnegie Hall – her childhood ambition – but instead brought her acclaim as one of the finest popular singers of the 20th century, the peer of Bessie Smith, Billie Holiday and Aretha Franklin. The occasional public tantrums and the baleful glare with which she often transfixed her listeners brought her a gruesome brand of celebrity, the sort that can encourages an audience to buy tickets to watch a train wreck.

Eventually, in her mid-fifties, Simone was told by a doctor in Holland that she suffered from bi-polar disorder (formerly known as manic depression). Her friends were informed that the prescribed medication, an anti-psychotic drug known as Trilafon, would eventually impair her motor skills, including her ability to play the piano: just another of the tragedies, great and small, that punctuated a life of the woman who was born Eunice Waymon in 1933 in Tryon, North Carolina, a community in the Blue Ridge Mountains where one of the churches still includes windows and furnishings from a slave chapel, and who died 70 years later in her villa among the pines in Carry-le-Rouet, a seaside town in the south of France.

Garbus’s Netflix film was made with the assistance of Lisa Stroud, the singer’s daughter, who is credited among the executive producers. Now known in her own performing career as Lisa Simone, she speaks candidly about a mother whose capacity for love was never in doubt but whose parenting skills fluctuated with her moods. Other valuable testimony comes from the guitarist Al Schackman, Nina Simone’s long-time accompanist and musical director; the promoter George Wein, who presented her at the Newport Jazz Festival in 1960; and, in an interview recorded in 2006, Andy Stroud, the NYPD detective who married her in 1961, when her career was taking wing, and handed in his badge in order become her manager. “He knew what he wanted and he just took over,” she says.

They settled in a 13-room mansion with four acres of land in Mount Vernon, New York, where Lisa was born. But Stroud is notorious for an incident in which, as recounted here by Simone, he beat up his wife in the street before taking her indoors, tying her up and raping her. “Andy protected me against everybody but himself,” she says. Although the singer’s handwritten diaries are used to provide eloquent evidence for the turbulence that undermined her life, there is nevertheless a sense of veils sometimes being drawn, particularly over her liaisons after leaving the US for exile in Barbados, Liberia, Switzerland and ultimately France. But then two hours is nowhere near enough to tell the full story of a complicated life with so many interrelated personal and professional facets.

Apart from evidence of her incomparable musical gifts, the film is strongest on Simone’s relationship with the civil rights movement, which provided a channel for the feelings first aroused when she was denied – on racial grounds, she believed – a place to study classical piano at the Curtis Institute of Music in Philadelphia, and in which her friendships spanned the spectrum from Martin Luther King to Stokely Carmichael. “How can you be an artist,” she asks, “and not reflect the times?” No one did more than her, in responding to the Birmingham church bombing of 1964 by writing “Mississippi Goddam”, and in subsequently adapting the words of the poet Langston Hughes for “Backlash Blues” and the playright Lorraine Hansbury for “To Be Young, Gifted and Black”, to give the movement its anthems.

Stroud describes her as having been “sidetracked” by these new concerns during the latter years of their marriage. “She was putting down white people like a barking dog,” he says dismissively, “but she still wanted the good things.” To which, at this end of this often harrowing film, one can only reply, why the hell not?