One (or rather, three) from the heart of Coppola’s American Zoetrope dream...Hammett was intended by Francis Ford Coppola to be one of his American Zoetrope studio’s first movies, a calling card for the Zoetrope vision and the American debut of German director Wim Wenders. In the event, the film, an homage to novelist Dashiell Hammett boasting a rare lead from Coppola regular Frederic Forrest, did become synonymous with the studio. Just not the way Coppola had hoped. 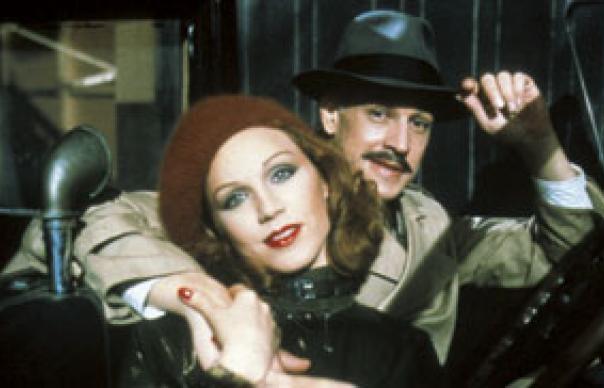 One (or rather, three) from the heart of Coppola’s American Zoetrope dream…Hammett was intended by Francis Ford Coppola to be one of his American Zoetrope studio’s first movies, a calling card for the Zoetrope vision and the American debut of German director Wim Wenders. In the event, the film, an homage to novelist Dashiell Hammett boasting a rare lead from Coppola regular Frederic Forrest, did become synonymous with the studio. Just not the way Coppola had hoped. Slated by critics, ignored by the public, Hammett’s production became a familiar Zoetrope tale of spiralling costs, blown deadlines and creative battles. Coppola is rumoured to have reshot 70 per cent of Wenders’ movie himself.

Revisiting it today, however, as it receives a belated UK DVD debut alongside two more from Zoetrope’s slate – One From The Heart and The Escape Artist – Hammett stands as a perfect expression of the Zoetrope ethos. American Zoetrope had a bold remit. First, to offer a home for artists telling stories mainstream studios wouldn’t touch – a European visionary like Wenders made the perfect showpiece. Second, to embrace technological advances to create a new, cutting-edge filmmaking, a prophet of cinema’s coming digital revolution.

But Coppola aimed to blend the new with the best of the old. From the traditional studio system, he retained the idea of building a company buzzing in one creative hive. You see the factory in operation in these films as names and faces recur: Forrest joins Teri Garr and Raul Julia in One From The Heart; Garr and Julia co-star in The Escape Artist; Coppola’s production designer Dean Tavoularis oversees all three. Tavoularis is key. In reaction to Apocalypse Now’s location nightmares, Coppola’s Zoetrope films stress a retreat from the world and a return to studio sets: the fabricated dreamlands of Hammett’s 1920s San Francisco, the neon fantasy Vegas of One From The Heart.

Hammett was based on Joe Gores’ 1975 novel, a meta-fiction that blends Dashiell Hammett’s biography with elements of his stories. It was in trouble long before Wenders came aboard. Coppola originally hired Nicolas Roeg to direct, and by the time Wenders arrived, Hammett had languished in development for four years. As shooting began, there was still no finished screenplay. Filming dragged on while Wenders, badgered by Coppola, wrestled with writing. When rumours spread that Wenders was rewriting to focus on a new character coincidentally played by his then-wife, Ronee Blakley, Coppola pulled the plug.

It gives an idea of how bad things got that, during Hammett’s hiatus, Coppola had time to dismantle its set and shoot One From The Heart. Envisaged as a small, blue-collar love story, it ballooned to a budget of $27 million, leaving Coppola selling his property to save his studio. It took just $2.5 million on release. Today, it floats: a unique, mad, pop bubble. With songs by Tom Waits and Gene Kelly advising on dance numbers, it’s like a Raymond Carver story adapted in the style of Moulin Rouge.

Compared with these, The Escape Artist, directed by Zooey Deschanel’s father, Caleb, went like a dream. With a script from ET’s Melissa Mathison about a teenage boy’s determination to become a magician like his dead father, it was completed on schedule, but on release ran true to Zoetrope form. Critics sneered, audiences stayed away. When Wenders and Coppola finally reconvened to resurrect Hammett, it was with a new script, set and substantially altered cast. The film we’re left with is a charming mongrel. Beautifully played by Forrest, Hammett has just left the Pinkerton detective agency, afflicted by tuberculosis and alcoholism. He’s trying to hack it as a pulp writer, but the writing won’t come. When an old detective pal (Peter Boyle) shows up, he gets pulled into one last case and stumbles over the inspiration for his great books, The Maltese Falcon and The Thin Man.

Hammett bursts with ambition. Littered with noir nods and cameos (notably Elisha Cook Jr, of the 1941 Maltese Falcon), it’s in love with old movies, yet filled with new-cinema performers and ideas. By its 1982 release, Coppola had put his studio up for sale. The Zoetrope dream was over. But these films still dream.

EXTRAS: Only on One From The Heart: four docs, deleted and alternate scenes, press conference, demo, rehearsals, trailers.
Damien Love