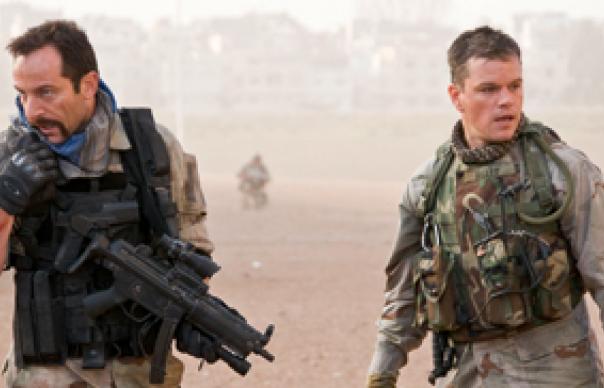 With Tony Blair lately facing some pretty easy questions about the Iraq War, and the presence there or not of WMD, Green Zone arrives at a particularly apposite moment.

Made by a director, Paul Greengrass – who, with notable exceptions like the Bourne franchise – makes films that have their jumping-off points in fact, this is a movie that promises a lot. A thriller, yes, but one that asks some hard questions along the way.

Things get off to a pretty impressive start.

It is the early days of the war in Iraq, and we’re travelling along the same timeline as the humvees of Generation Kill, albeit with rather wobblier camerawork. In an insecure military HQ, a leading military official, General Al-Rawi (the Jack Of Clubs on the Iraq War playing cards) is preparing to go to ground. Bombs shake the foundations of the building. The night sky has been turned orange with missile fire.

Meanwhile, on the other side of the conflict, Roy Miller (Matt Damon) is a super-efficient Warrant Officer facing an unexpectedly calm scene. He’s wondering why his crack squad, detailed to find live WMD sites, keep coming up empty handed. Exemplifying the willingness to disobey orders, confront authority and completely drop off the grid that we have come to expect from unconvincingly rendered US military personnel, he sets about asking questions well above his pay grade. In this, he is aided by a helpful CIA chief (Brendan Gleeson).

What follows is a strange mixture of action thriller (the hunt for Al Rawi) and political thriller (the chase to get the bottom of the WMD mystery), and this multi-tasking is a project that proves too difficult to pull off.

Undoubtedly, Paul Greengrass is a fantastic action director, and here a memorable shootout in a kitchen confirms how he is unrivalled, cinematically speaking, in close-quarters, hand- to-hand combat.

Unfortunately for Green Zone, the bigger picture, where the film pulls back and asks us to consider the interests and agendas that led to war, and how the existence of WMD in Iraq post-1991 was a convenient pretext to topple Saddam is one with which now surely everyone is abundantly familiar. When Damon’s Miller finally deduces that he, along with the rest of the world, has been lied to, the reaction is not astonishment, but more likely, “Well, no shit.”

All round, Green Zone bears all the hallmarks of an impressive movie.

Damon is good as Miller, who I think we’re meant to regard as brave, efficient, but a bit on the thick side. The generally good Amy Ryan perspires in khaki as a journalist who wants to get to the bottom of the story, but discovers she is unwittingly perpetuating The Big Lie. Greg Kinnear shows his range as a goal-driven regime-changing politico, and Gleeson is bulky and unorthodox as his diametric opposite. Everywhere you look, all the signs are there to tell you that this is a powerful movie with something to say. You investigate, and guess what? There’s nothing there!

Somebody should really ask some questions about that.