Brilliant, honest documentary about the late, great and flawed writer 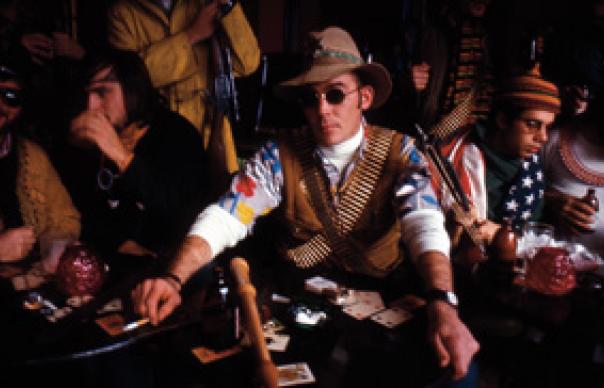 
Somewhere near the start of this terrific biography of one of the most influential journalists of the 20th century, two pieces of prose are read aloud. One, from Hunter Thompson’s breakthrough book, 1966’s Hell’s Angels, is wonderful: an evocation of the freedom and elation of two-wheeled travel that purrs and growls absolutely like a gently revved Harley-Davidson, and ruminates, rather presciently as it turned out, on the notion of “the edge”, and how close to it one may prudently ride.

The other, Thompson’s instant response to the Al-Qa’ida attacks on his native America on September 11, 2001, is rubbish: ignorant, fatuous hackery that sounds like a post by a self-righteous blogger failing, as so many do, to emulate the furious jabber of Thompson at his splenetic best. That both pieces were written by the same man is the essential tragedy of Hunter Thompson. That both pieces, and their implications, are acknowledged by this brilliant and bracingly honest film is the essence of the triumph of Gonzo: as good a documentary about Thompson as could be made, and as good a documentary about anyone as might be imagined.

Director Alex Gibney was previously responsible for the equally unimpeachable Enron: The Smartest Guys In The Room and Taxi To The Dark Side. They both tackled subjects – monstrous corporate rapacity, America’s War on Terror –which should have provided the subject of Gonzo with abundant inspiration to maintain (or, really, reclaim) the standards of his late 60s/early 70s prime. Instead, Thompson shot himself dead in February 2005, aged 67. Gibney was wise to permit the gush of better-to-burn-out-than-fade-away drivel that attended Thompson’s demise some time to subside. Though none of the cast of contributors – which includes many of Thompson’s adversaries – speaks entirely ill of the dead, friends, family and foe alike unite around a consensus of flagrantly squandered talent.

When Thompson was good, he was astonishing. Turned loose by Rolling Stone upon American politics in the early 1970s, he set about the fixtures and fittings with a destructive glee unrivalled since the pomp of HL Mencken (then-president Richard Nixon, Thompson jeered, was “a cheap crook and a merciless war criminal… he speaks to the werewolf in us, on nights when the Moon comes too close.”) The books resulting from that period, notably Fear & Loathing In Las Vegas and Fear & Loathing On The Campaign Trail still read as lively, angry and vicious as a boated shark (Johnny Depp, who played Thompson in the 1998 film of Fear & Loathing In Las Vegas, is an excellent narrator, investing a studied deadpan with a hint of menace). Thompson’s journalism was an enduringly hilarious riot of observation, allegation and borderline fabrication (in 1972, Thompson wrote of “rumours” that Democratic presidential hopeful Ed Muskie was addicted to the hallucinogen Ibogaine – other news agencies picked up the story, without pausing to wonder who might have started said rumours). He was a superstar. And then…

“He lost it,” admits Jann Wenner, Rolling Stone’s publisher and Thompson’s chief patron. “He was a prisoner of his own fame.” Everywhere he went, Thompson became the story – a problem even for a reporter known for his freewheeling self-indulgence on the page, and one exacerbated by Thompson’s willingness to make manifest his obnoxious, drug-baked, gun-nut caricature for the gratification of his groupies. He grew bored, and his writing grew boring.

In an attempt to reinvigorate him, Wenner dispatched Thompson to Kinshasa in 1974 to cover the Mohammad Ali – George Foreman title bout. While Norman Mailer returned from Zaire with notes towards an imperishable masterpiece of sports writing, Thompson didn’t even show for the Rumble In The Jungle, choosing instead to idle in the hotel pool. It was a dereliction that would – and should – have been career-ending for any other writer, even if they’d exhibited such disdain for the village dog show. But Thompson was, as he always was, forgiven: he’d become an early example of what we now call a celebrity, ie someone whose works are judged by their reputation, rather than the other way around (Thompson’s former landlord in Woody Creek, Colorado, attests, with unmistakeable and baffling affection, that Thompson “Never paid his rent, broke up my marriage and taught my children to smoke dope.”)

A less sentimental but more astute testament issues from the artificial larynx of cancer-stricken Hell’s Angel icon Ralph “Sonny” Barger: “It doesn’t mean he isn’t a jerk, but he was a great writer.” It does become hard not to wonder how much more good work Thompson might have produced – and, indeed, how much longer he might have lived – had he not been quite so cossetted and indulged by those in awe of his legend.

Gonzo is deftly assembled from archive footage, previously unseen family material, previously unpublished writings, and interviews with a quite startlingly array of commentators, including one former President (Jimmy Carter) and three presidential aspirants (Gary Hart, George McGovern, the appalling Pat Buchanan – the latter of whom may now at least be considered a good sport, given his precise embodiment of absolutely everything Thompson hated). The stories and memories that unfurl are giddying, provocative, hilarious. One all but weeps that no record exists of the conversation that occurred when, as Buchanan recalls, Thompson accepted a lift in the presidential limousine of Richard Nixon. And, as one considers Thompson’s substantially self-inflicted decline (some interviews filmed in his later years are accompanied by sub-titles), one marvels at America’s genius for adopting, assimilating – and, perhaps, neutralising – its dissidents.