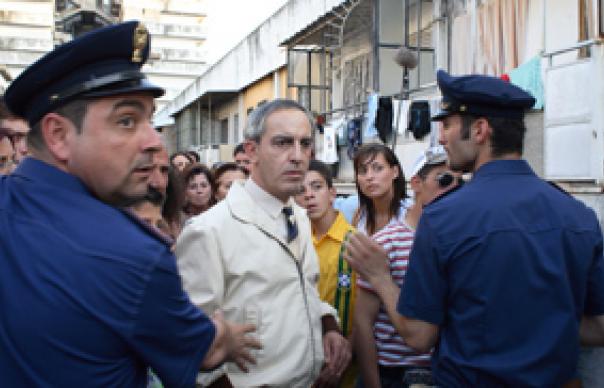 So comprehensively has the subject been treated in the movies, it’s hard to even hear the word “mafia” without thinking of a cinematic image. Whether it’s the sombre, businesslike calm of Michael Corleone’s office, or Robert De Niro and Joe Pesci raining down kicks on a body in the trunk of a car, whatever springs to mind does so through the vehicle of cinematography of the most meticulously artistic kind.

Gomorrah, the Cannes Prize winner by director Matteo Garrone is a movie which attempts to reprogramme some of those Pavlovian responses, taking a movie about the organization back to basics both in terms of its setting (it takes place in Italy), and also the manner of its, as it were, execution. Shot with the deceptively casual feel of a documentary, Gomorrah is a drama with all the grit a fan of genre pictures could ever want, but also a sense of moral responsibility which endures after its over. This, above all, doesn’t just dwell on the quasi-politics of criminal organizations, but also the consequences of their actions.

Set in the grim tenements of Naples, where families are affiliated to the warring clans of the local organized crime gangs, (or “Camorra”), from the off we become intimately acquainted with the realities of these working class lives. Much like Larry Clark’s photographs, Garrone’s direction is seemingly offhand, but incredibly intimate. Groceries, kitchens, store rooms, cluttered apartments, dark pools of blood – throughout the five vignettes that make up the film it’s a vivid, sensory picture of how these people live.

What the film doesn’t ever do, essentially, is romanticize. Here, “the family” is meant solely in the biological sense, and no more, and throughout Gomorrah, we see characters given depth and motivation by their family ties. During one excruciating interlude Roberto, an apprentice in – yes! – a waste management business, introduces his father to his “boss” and they engage in painfully awkward small talk. In another, a tailor, Pasquale takes on a bit of extra-curricular tuition for the sake of raising money for his growing family. As far as the organization itself is concerned, however, forget it: any ties are temporary, and favouritism likely to be quickly rescinded. Bosses are unworthy of respect. Offence is easily given, and revenge swiftly taken.

All of which is very much in Garrone’s game plan for Gomorrah. It’s an anti mob polemic which in its best moments creates a terrible, unpredictable menace – so matter of factly is it all filmed, moments of seemingly no outward significance come to carry an almost unbearable tension. It’s a remarkable achievement, and the film has some terrific performances (notably from Marco Macor and Ciro Petrone as junior gangsters Marco and Ciro), but the effect of the whole is slightly skewed.

Clearly – the movie concludes with some terrifying crime statistics – Garrone wants to remind us of the veracity of his story. As the narrative plays out, though, you wonder if he’s sacrificed his storytelling somewhat in order to do so. Gomorrah, as a result, feels nasty and brutish – but actually quite long.

Ultimately, though, Gomorrah’s achievement is huge, not least in making you think differently about a type of movie where you thought, by now, you’d probably seen all the tricks. Every time you think you’re out, inevitably, someone pulls you back in.