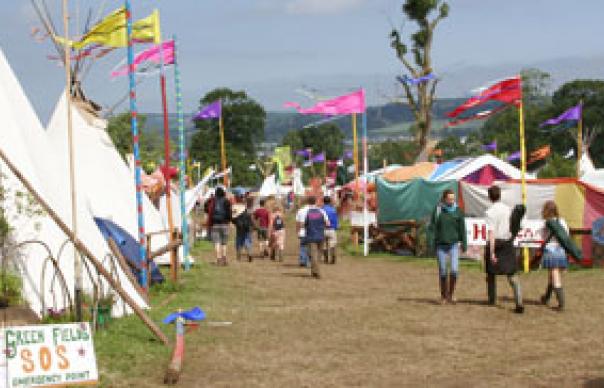 A few months before the Midsummer Solstice in June 1971, film producers Sy Litvanoff and David Puttnam approached Nicolas Roeg to film a strange, underground free festival that was happening in Somerset.

Roeg arrived at the freakshow with eight cameramen in tow, but after filming for a few days, he abandoned the project, waylaid by bigger films like Walkabout and Don’t Look Now. After being shunted around to various editors, it was eventually salvaged by Peter Neal, an amateur filmmaker who attended the festival. Neal artfully intercuts Roeg’s music footage with 160mm film taken by punters to create a slightly dream-like, fan’s-eye voyage around the festival fields, without any commentary.

It serves as an almost anthropological examination of events happening away from the music: the building of the Pyramid Stage, the crazy preachers, the enormous spliffs, the sun worshippers, the mystical mumbo-jumbo, the naked hippies rolling in mud, the religious gurus and the impromptu outbursts of guitar playing, singing and drumming from stoned punters.

Underappreciated at the time, the film was dismissed as a cheapskate English version of big-budget festival movies such as Woodstock or Monterey Pop. The live footage does include some dreck (sorry, Melanie), but there are actually a few cracking musical performances: Terry Reid opens the film with an incendiary version of “Dean”, while Traffic close it with a pulsating Brazilian-tinged “Gimme Some Lovin”. However, just as one can still idle away an enjoyable four days at Glasto without stepping anywhere near a music stage, the film captures how music has always been tangential to the Glastonbury Festival experience.

Oddly this release sees Peter Neal relegated to the role of “completion director”, instead crediting the film (for the first time) to Nic Roeg. Pasting a big Hollywood name on the front is, presumably, intended to make it a more prestigious release, but Roeg’s witterings in the director’s commentary suggest that he was barely involved in the project and has only the dimmest memories of the festival (“hmm,” he observes at one point, “a lot of people had long hair in those days, didn’t they?”).

An accompanying Making Of film makes a slightly shambolic job of setting the scene and explaining events. The film itself, though, beautifully transferred to disc for the first time, remains a fascinating, absurd, hilarious, cringe-making but ultimately quite moving record of a unique period in counterculture.