Franz Ferdinand – You Could Have It So Much Better

Archdukes of the new new wave return with perfect aplomb 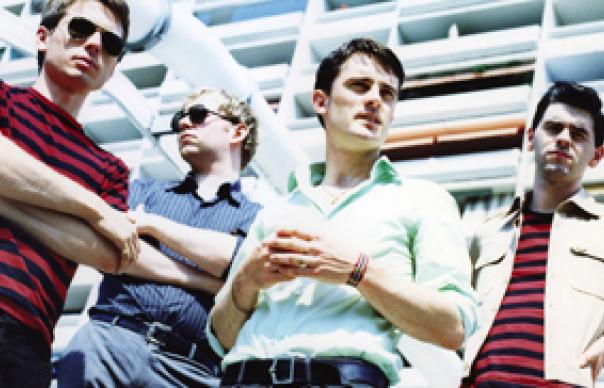 Writing in 1985, as New Pop vision curdled into Thatcherite fiasco, ideologue and huckster Paul Morley was sure that, somewhere along the way, history had taken a wrong turn. “If life were less complicated and things had gone to plan,” he complained, “Subway Sect’s “Ambition” would now be accepted as one of rock’s great number ones, and groups influenced by Subway Sect, like the Fire Engines, would be bigger than Duran Duran.”

Twenty years later, you might hear Franz Ferdinand’s comeback single “Do You Want To?” as Morley’s dream put into practice. It’s the sound of crunked-up post-graduates of the Glasgow School launching an invasion of Duran’s “Planet Earth”; the frantic anxieties of post-punk dumbed up for 21st century dancefloors.

It’s also the perfect reveille to the second stage of a pop campaign that’s so far been staged with military precision. Franz Ferdinand slid into public view at the start of last year with the Strokesy false-start of “Take Me Out”. 18 platinum months on, “Do You Want To?” is their own answer record. It revisits the same scene of seduction, but in place of sly chat-up, they’ve returned with a brazen come-on, all the arthouse chiaroscuro replaced with klieg-light bravado. In its mad, gallus swagger, it practically drawls, “I know I will be leaving here with you.”

It’s an audacious return. Ever since The Bends set the second album template, new groups have taken badly to the globalisation of success, touring initial acclaim into exhaustion and bitterness. Even McFly recently felt the need to follow up their teeny BritPop pretensions with jaded pseudo-maturity. You Could Have It So Much Better… is the refreshing sound of a group revelling in its triumph, as though Kapranos and co had skulked long enough round the Glasgow indie circuit and were now determined to pounce greedily on the possibilities of pop.

They make a blistering start: “The Fallen” crashes in on a Zeppelin-sized riff, the first crunch of a production by Rich Costey (previously known for his work with Rage Against The Machine and The Mars Volta) which adds bassy weight to the group’s angular poise. Hymning a punk leper-messiah, sitting “in a limousine/ flinging out the fish and the unleavened”, drinking, thieving, fucking and fighting while preaching virtue, it’s a voracious rock monster of an opener. Except where you might expect riffing indulgence, the song tumbles headlong through chorus after chorus, singalong la-la-las in place of solos. If this is the group’s rock album, it’s rock excoriated of everything except hooks, leanly disciplined, evoking the golden pop spree of Jagger and Richards, 1965-67.

“The Fallen” is followed, pell-mell, by “Do You Want To?”, and then, raising the pace yet further, “This Boy”, cascading in via spiked Orange Juice to a breakneck Gang of Four clangour. Originally written during Kapranos’ pre-Franz tenure with The Amphetameanies, a Glasgow ska collective, it caricatures the amoral flipside to the group’s pop will to power: “I sees losers losing everywhere…/ I am complete, invincible / If I have one set principle / Then it’s to stand on you, brother”.

It’s an impossible pace to maintain, and “Walk Away” is the first breather, one of three ballads, all of which take their cue from Britpop’s essays at Scott Walker velveteen languour. The cute come-hither of “Eleanor Put Your Boots On” ushers in the coronation of Kapranos and Eleanor Fiery Furnaces as this generation’s Damon and Justine. But “Fade Together” is the most successful, the poignancy of church hall piano and old passport photos inspiring Kapranos to give his Noel Cowardly aplomb the slip and become genuinely affecting.

The ballads also act as kind of chapter markers. Four songs in and You Could Have It… would make a matchless EP, or even one of those legendary 15-minute Fire Engines sets. But a mid-record longueur sets in, and the group fumbles the baton a little. “Evil And A Heathen”, “You’re The Reason I’m Leaving” and, hinting at the problem, “Well That Was Easy” sketch betrayal with great gusto. After such an incendiary opening, they rattle along a little generically. As an avowed pop group, self-consciously dedicated to making “music for girls to dance to”, it may be that Franz were always going to have difficulties pacing an album across 13 tracks.

So it might make sense, after all, to view the record as a compilation of EPs. The first, extravagantly amped-up postpunk-funk; the second a crowd-pleasing reprise of their patented louche rumble; and then a third that sees the group loosen up from their stiff-limbed strut a little, exploring what else they might do once they’ve conquered the top ten and the dancefloor. If you were to take the group’s masterplan scheming (as satirised in the video to “This Fire”) at face value, you might believe it had been deliberately conceived as a formally perfect second album, appealing to flighty pop tarts, diehard moshpits and fastidious critics in turn.

This final section, comprising the title track, “I’m Your Villain” and the closing “Outsiders” sees them hit on a third way between juggernaut assertiveness and archly veiled regret, in an attempt to maintain the precarious art-pop balance. The presiding spirit here may be the troubled funk of Talking Heads circa Fear Of Music, or the antic intensity of Magazine: “I’m Your Villain” could be the first Franz Ferdinand song that swings rather than simply jerks or pounds. With “Outsiders”, the album drifts further out, nervy choppiness and eerie melodica replacing their earlier cocksure poise.

The parts add up to an astonishingly assured whole, sure to consolidate their burgeoning popularity. But the title still nags, as a goad to the band themselves as much as their audience. If any of the current crop of post-punk pasticheurs were to succeed in reviving not merely the period styles and trappings of the early ‘80s, but also that crucial questing, adventuresome spirit, you suspect it would be Franz Ferdinand. The founding members of the Glasgow School sincerely aspired to synthesise the virtues of Chic, Lovin’ Spoonful and Vic Godard – and it’s possible Franz Ferdinand could be similarly reckless in their pursuit of the perfect marriage of art, pop and dance. As strong as this record is, there’s a way to go to make good on the promise of its title.