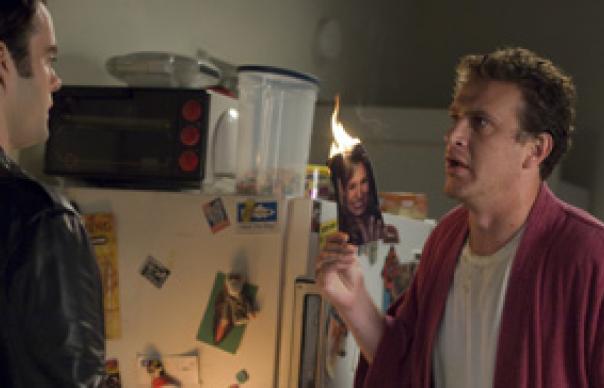 The Apatow crew – lowering the tone yet heightening the ambition of film comedy with the likes of Knocked Up – whip up another over-long romp. Profound? No. Funny? Of course. There’s a fresh element here in the unique shape of Russell Brand: at first you fear a jarring culture clash to match, say, Dick Van Dyke’s Cockney accent.

In fairness, he excels. It helps that he’s playing himself, pretty much, as conceited, promiscuous, Brit-rocker Aldous. His band: Infant Sorrow. Their refrain: “Sodomize Intolerance”. He steals TV actress Sarah (Veronica Mars star Bell) from Peter (screenwriter Segel, our sensitive-loser). Peter is distraught. He weeps, drinks, shags inappropriately. Then he holidays in Hawaii. And who’s in the same hotel? Sarah and Aldous, shagging inappropriately. With mostly hilarious consequences.

Fortunately for Peter – and the feel-good factor – hotel employee Rachel (Kunis, Family Guy’s Meg, no less) is into him. Faces from kindred movies cameo, not least Paul Rudd’s stoned surfer. With an acerbic sub-plot lampooning CSI, albeit with more penis and vagina gags, this is as smart as it is filthy.