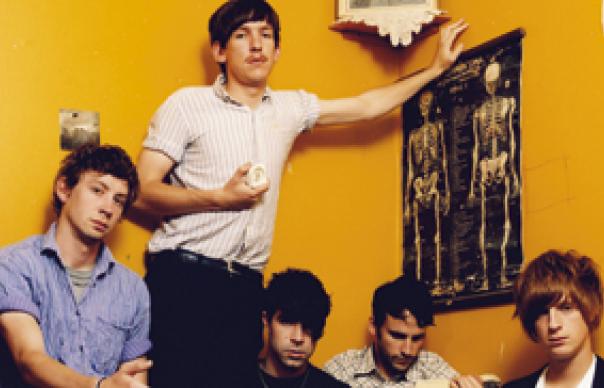 Shoehorned by hype merchants into all the right places, over the past few months you’re more likely to have read about Foals, or winced at their haircuts, than heard their wired, wiry music. If only it were possible to ignore the cheerleading, because the ideal way to approach Antidotes would be to have no knowledge of the people who made it. Then you’d really be surprised.

Of no fixed style, this boyish, disciplined five-piece would appear to want to position themselves between Battles and Bloc Party – like Kele Okereke, frontman Yannis Philippakis is a yelper. Are Foals punching above their weight? Perhaps, but this formidable album proves they’ve already an appetite for invention and an aptitude for composition equal to those acts.

Rarer still, not only are Foals comfortable referencing hip New Yorkers of yesteryear like Steve Reich, Arthur Russell and Glenn Branca, they tend to practice what they preach. Feedback, scuffed and muted, ripples across the album. Like a prized out-take from some mid-’80s Russell session, “Like Swimming”‘s chirping highlife figures cascade over humming hardware and handclaps.

This unorthodox attitude, a desire to do things differently, galvanises Foals. Having recorded the album with TV On The Radio‘s David Sitek in New York last summer, for example, the band discarded much of his work and decided to produce it themselves back home. Whichever way you dice it, they’ve ended up with a set of terrific songs. True, “Cassius” could’ve fallen off Silent Alarm, and “The French Open”, with its lurching tempo and oafish Franglais, is not an attractive opener. More impressive are “Red Sock Pugie”, “Olympic Airways” and “Electric Bloom”, handsome indie numbers with goosebump choruses garnished with exotic rhythms and otherworldly effects. “Big Big Love (Fig.2)”, (i)Antidotes(i)’ emotional centrepiece, evokes a disco Mogwai, and it’s great fun listening to Foals tie themselves in knots on the final “Tron (Is A Great Film!)”.
They’re an ambitious young band. This is an exciting debut. Now the real challenges can begin.