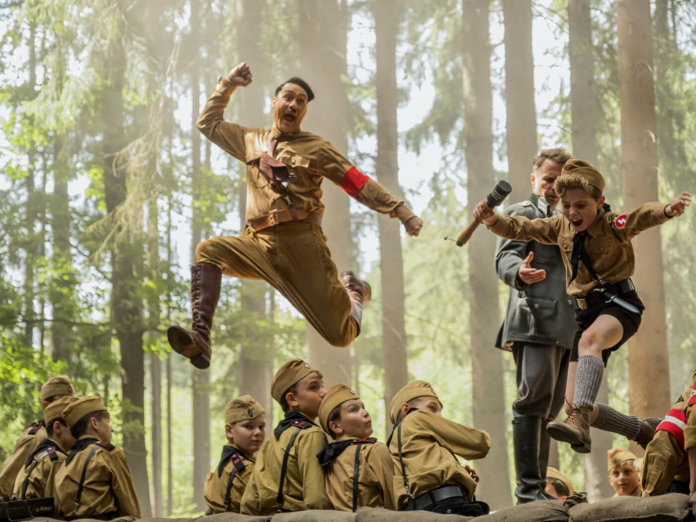 It’s not the first time filmmakers have wanted us to laugh at the Führer – from Chaplin and the Three Stooges to Mel Brooks. But Waititi’s version is breathtakingly risky, portraying Hitler and other (fictional) Nazis in the broadest possible terms. But critical to appreciating how this “anti-hate satire” works is the understanding that this is all filmed from the perspective of Jojo himself. The intentionally immature setup dominates Jojo Rabbit, though Waititi – whose previous films include Thor: Ragnarok – finds weirdly sentimental pauses along the way.

Jojo recently lost his sister to influenza and his father to the war. He lives with his mother Rosie (Scarlett Johansson) and is, he admits, “massively into swastikas”. Jojo, though, isn’t exactly soldier material and after suffering a serious injury he is sent home. There he encounters Elsa (Thomasin McKenzie), a Jewish girl hiding in his attic crawlspace. His instinct is to tell the authorities, but instead they become unlikely friends.

Like Waititi’s earlier The Hunt For The Wilderpeople, Jojo Rabbit could be described as a kids’ film for adults, since it deals in naivety, in a world that’s childlike as opposed to childish. The two talented young leads are the main reason this all pays off in the end, but the film’s shrewdly cast supporting players – notably Sam Rockwell’s shabby Captain Klenzendorf – add substance and depth in the meantime. Wes Anderson is a good reference point; Waititi’s film is saturated in a similar aesthetic and tone.