A colourful, Colonel’s-eye view of the Elvis story 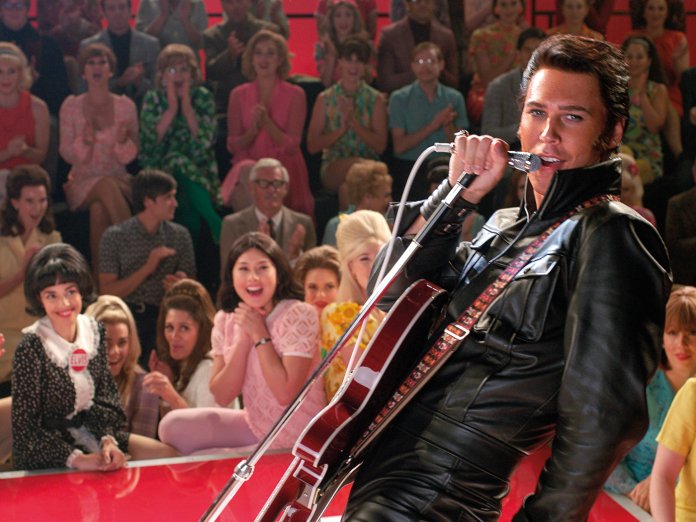 Of all the filmmakers who could have made an Elvis biopic, it had to be one whose aesthetic is more Vegas bloat than Sun Studios leanness. Baz Luhrmann’s Elvis lives up to the swooning excess of his Moulin Rouge, even down to its digital diamanté-studded end credits. Less a narrative than a deluxe jukebox musical with touches of Douglas Sirk melodrama, Elvis is framed as a sort of Citizen Kane deathbed reverie from Colonel Tom Parker, Presley’s Dutch-born, Mephistophelean manager. He’s played by Tom Hanks with a bizarre, undefinable European accent, in makeup suggesting a cross between the Penguin and a papier-mâché effigy of Rupert Murdoch.

How Parker ‘created’, or rather enslaved Presley is the narrative drift, but the film’s real pleasure lies in its full-tilt comic-strip stylistics and a terrific performance by Austin Butler (a TV stalwart previously seen in Tarantino’s Once Upon A Time…). His Elvis is something of a coy innocent, less of a confident joker than the original, not quite aware of his powers, but rebellious when it comes to doing things his own way, as on the ’68 TV Comeback Special.

Don’t expect the dark stuff – the decline isn’t touched on, nor his attempts to ingratiate himself with Richard Nixon (this film paints Elvis as a tender-hearted liberal). Priscilla, played by Olivia de Jonge, barely gets a look-in. The film is best experienced as a showbiz panto, with famous names flitting by – Kelvin Harrison Jr as BB King, Alton Mason show-stealing as Little Richard.

The emphasis on Elvis’s debt to black music might have expressed itself more subtly than with tarted-up rap recreations of his work – Doja Cat, CeeLo Green and Eminem are among the soundtrack contributors – but then this is no more a film for purists than Luhrmann’s Romeo + Juliet was for Stratford-on-Avon regulars. Elvis is hyperbolic, one-dimensional and ludicrous – but as high-excess cinematic myth-making, it’s a blast.