Felice Brothers – Yonder Is The Clock

A boldly brilliant work of protest and rage 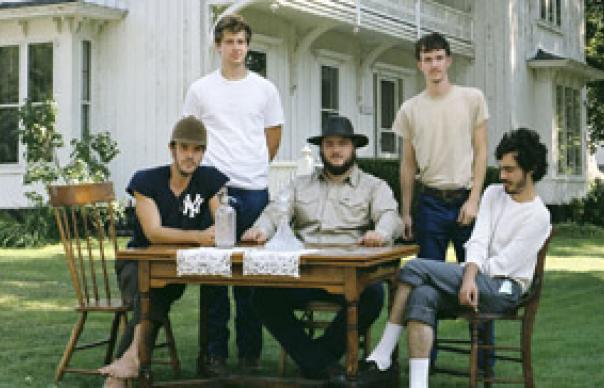 The Felice Brothers have aptly taken the title of their new LP from a line in The Mysterious Stranger, a post-humously published novella by great American writer Mark Twain, author also of The Adventures Of Tom Sawyer and Huckleberry Finn, classics both of a literary Americana as evocative of a glimmering mythic past as anything you’ll find on Harry Smith’s Anthology Of American Folk Music, that repository of “the old, weird America”, or, for that matter, The Basement Tapes.

The Mysterious Stranger, in contrast to those fabulist confections featuring Tom and Huck, was a bleak satire about mankind’s general wretchedness, wholly unsparing. In it, the Young Satan, nephew, apparently, of the senior Satan of Biblical disrepute, is an angel come to earth to reveal to his gathered acolytes that life is meaningless, their God nothing more than a vast indifference. The chapter from which this album takes its name ends with an astonishing tirade against the coarse manipulation of popular opinion by seeded minorities – religious and secular – and the submission to their will of the craven majority, whose servile obedience, hypocritical acquiescence and self-serving spinelessness is apparently boundless.

Twain’s bitter rant – withering satire worthy of Phil Ochs or Randy Newman – has an obvious contemporary relevance to post 9/11 America, the rise of the religious right and a ‘war on terror’ inspired by a conniving cabal whose greed was disguised as patriotism, all opposition to their calamitous adventure denounced as treasonous betrayal. The public’s complicity in all this would have been sad confirmation for Twain of their disastrous gullibility, not much having apparently changed in the 100 years since he wrote The Mysterious Stranger.

That book’s eternal pessimism gusts like a cold hard wind through Yonder Is The Clock, which occupies an allegorical landscape as vividly imagined as the world described by Dylan on John Wesley Harding, that dusty bowl of cruel despair, bad things heading its way. The Felice Brothers have previously been no strangers to the raw hurt of things, the desperate scrabbling of the bereft and oppressed, life’s losers pinned to a wheel of pain and left to hang until their hands rot off. You think, for instance, of songs like “Rockefeller Druglaw Blues” from 2007’s Tonight At The Arizona and “Frankie’s Gun” from last year’s The Felice Brothers, which was shortlisted for the inaugural Uncut Music Award. These were grim tales of young men driven to crime by economic circumstance, songs that lent voice to a put-upon underclass with the empathetic vigour that Woody Guthrie inspired in the young Dylan. Nothing they’ve done before, however, has in this respect been as angrily sustained as it is here, on an album of growling protest and noisy rage, the picaresque adventures of The Felice Brothers replaced by harsher narrative lines.

“Get the boys, turn on the show,” are the album’s opening words. In other circumstances, they may have been an instruction to strike up the band, bellowing entertainment to follow. Here, on a song called “The Big Surprise”, plaintive piano, dolorous bass and drums that sound like someone trying to knock down a wall fall in behind Ian Felice’s weary vocal lead, the group sounding as forlorn as the orchestra on the Titanic, the ship of state The Felice Brothers have been sailing on now listing fatally beneath them, going down with all hands. The track’s eventually exclamatory tone, its forecast of a hard rain coming, is repeatedly echoed on the album, with an accumulative sense of impending calamity reminiscent of “Love And Theft”’s “High Water (For Charley Patton)” or an old blues holler like “When The Levee Breaks” (one of the album’s highlights actually is an old blues holler, a raucous version of Elder Curry’s “Memphis Flu”, a fire-and-brimstone musical sermon about the 1928 influenza pandemic in the South).

The Felice Brothers have previously invited comparisons with The Band, as much for the way they have sometimes looked, as on the cover of Tonight At The Arizona, as for the music they’ve played, which has sometimes recalled Music From Big Pink and The Band. The Band’s influence, which has at times been overstated to the cost of their own unique songwriting talent, is not as immediately apparent here as it was on The Felice Brothers. Key tracks like the wracked waltz of “Buried In Ice”, the eerie, slowly unfolding “Ambulance Man” and whispered lament of “Sailor Song”, for instance, are reminiscent with their woozy, weird clatterings and off-kilter instrumental voicings, of the Tom Waits of Mule Variations.

When The Band are recalled here, it’s not so much the breezy folk and bucolic country of The Basement Tapes that come to mind. “Chicken Wire” and the hugely combustible “Run Chicken Run” are broadly redolent of the loud bracing roar The Band made with Dylan at the January 1968 Tribute To Woody Guthrie concert at Carnegie Hall, when they rocked the joint with raucous versions of “Dear Mrs Roosevelt”, “The Grand Coulee Dam” and “I Ain’t Got No Home”. The latter, especially, would not be out of place here alongside the rowdy, gospel hoe-down of “Penn Station”, where much stomping of feet, rasping harmonica, Cajun fiddle and massed voices hint at the demented exuberance and hysteria of a revivalist church meeting, someone doing stuff with snakes and people talking in tongues.

The bruised heart of Yonder Is The Clock is probably located in four long ballads. The yearning “Katie Dear” is a musical letter home, ostensibly from someone serving time, although it could as easily be a letter to loved ones from a US soldier, sent down the years from anywhere from Valley Forge to Fallujah. “All When We Were Young”, meanwhile, evokes a childhood destroyed by war, the singer’s home-town, which could be Boston or Basra, destroyed by a downpour of bombs, the final minute or so of which is tearfully beautiful. Elsewhere, “Boy From Lawrence County” is about people who kill for money, in this case the bounty for Jesse James, that even friends of the outlaw are tempted by. Even better is the seven-minute “Cooperstown”, a hymn to a vanished America that finds a sad echo in the closing requiem of “Rise And Shine”, the record’s closing track.

As a State of the Union address, this bold and often brilliant record is less inclined towards optimism than, say, Springsteen’s admirable Working On A Dream. Despite the coming of Obama, the record predicts that for many the years ahead will continue to be bleak, to which extent it shares the same concerns for America’s vulnerable sub-classes expressed on parts of Neil Young’s new Fork In The Road, and, from what you hear, the imminent new Dylan album, Neil and Bob among the elite company The Felice Brothers may yet increasingly keep.