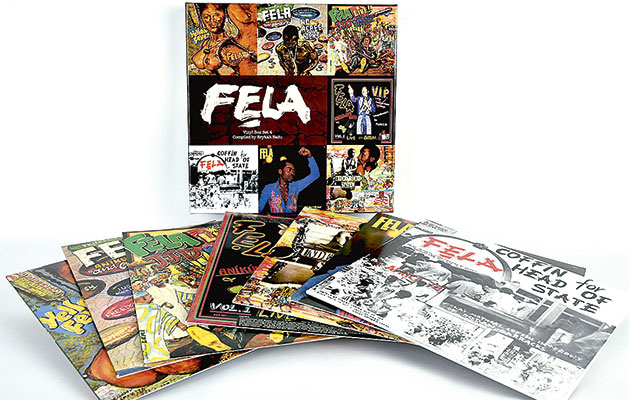 “With Fela, it just seems to have spilled out of him,” writes Erykah Badu in the sleevenotes to this set. “We instantly get the feeling that we are connected to those tones and vibrations.” The evidence bears that out. In his lifetime, the Nigerian bandleader fronted something like 50 releases, and pretty much none of them are bad: grab one at random and you can be fairly sure of getting two sides of scorching Afrobeat.

Still, Fela’s tireless profligacy means there are a number of routes through his catalogue, so as well as its extensive CD reissue campaign, New York’s Knitting Factory Records is preparing a number of curated vinyl boxes by some of Fela’s biggest fans. On the heels of Questlove, Ginger Baker and Brian Eno comes this box of vinyl albums selected by Erykah Badu. It’s a heavyweight set – seven remastered albums committed to seven pieces of vinyl, plus a poster from Fela artist Lemi Ghariokwu and a 20-page booklet featuring lyrics, previously unpublished photos and sleevenotes from Badu (funny, fannish) and Afrobeat scholar Chris May (dry, informative).

Badu’s picks capture Fela at his most political and personal. The title track of 1976’s Yellow Fever is a punchy funk with chiding horns and a lyric tacking poor black self-esteem and the fashion for skin bleaching; on the flip is  “Na Poi”, a rolling groove that explains the process of lovemaking in graphic detail. (“So there is a redeemer,” writes Badu in the sleevenotes. “Where my skin is unacceptably too dark, my ass is just fat enough.”) 1980’s Coffin For Head Of State, meanwhile, might be Fela’s most charged and defiant piece: an excoriation of the ruling government that finds Fela referring to the death of his mother at the hands of General Obasanjo’s soliders, and his placing of a symbolic coffin outside the Dodan army barracks.

Elsewhere, 1977’s No Agreement and JJD and 1979’s VIP – a live album captured at the Berlin Jazz Festival – find Fela’s band Afrika 70 on immaculate form, even as they stand at the verge of disintegration (VIP would mark drummer Tony Allen’s final recording with Fela, and by the time of the recording’s official release a new ensemble, Egypt 80, had come into being). That’s the band we hear on 1985’s gently seething Army Arrangement, restored with original horn section (the original issue featured overdubbed horns by producer Bill Laswell, added while Fela languished in jail); and Fela’s final album, 1992’s Underground System – a tribute to slain revolutionary leader Thomas Sankara that restates Fela’s eternal themes of black identity and outspoken resistance against the powers that be.

It’s easy to reduce Fela to a caricature, a set of revolutionary slogans – but in this music Badu sees a path to self-betterment, a chance to grow. “Perhaps we as people are in denial of personal growth,” she wonders, “because we fear the responsibility of governing ourselves.”