The four studio albums remastered and expanded with previously unreleased tracks, plus a bonus disc of singles 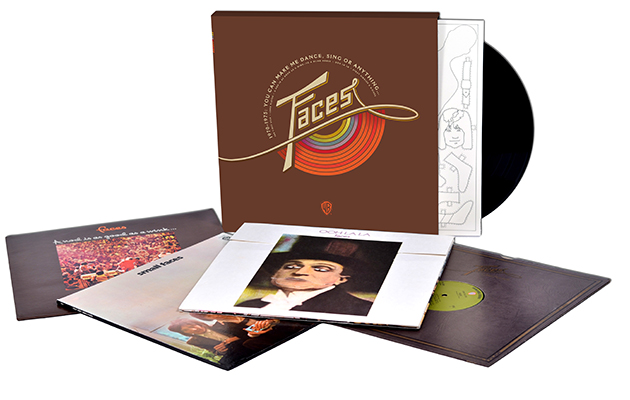 They came together in a marriage of convenience – remaining Small Faces Ronnie Lane, Ian McLagan and Kenney Jones were in need of a frontman, Rod Stewart required a rhythm section to further his nascent solo career and fellow Jeff Beck Group castoff Ron Wood just needed a gig. What the five had in common was a love of American R’n’B and a knack for appropriating its tropes with verve and personality. They went on to make but four studio albums, none of them a masterpiece (although two come close), along with a handful of single sides, during their four years as a working unit.

The Faces were barely there after Ooh La La, their 1973 swansong, with Lane going his own way, Stewart making his Atlantic crossing and Woody replacing Mick Taylor in the Stones. The brevity of their existence as a fully loaded entity, the lack of a Sticky Fingers or a Who’s Next in their discography and Stewart’s subsequent career have conspired to deflate the band’s legacy. Largely forgotten is the fact that the Faces’ status as an arena-rock band rivalled that of the Stones, The Who and Led Zeppelin following Stewart’s 1971 breakthrough, Every Picture Tells A Story. It was Rod who got the asses in the seats, but the band as a whole sealed the deal with its antic, boozy brilliance onstage. The records were primarily an advertisement for the tours – Jones admitted as much. But as the new retrospective You Can Make Me Dance, Sing Or Anything systematically reveals, there’s more substance here than the Faces’ marginalised present-day critical standing would lead the uninitiated to believe.

Whereas 2004’s Five Guys Walk Into A Bar, assembled by McLagan, functioned as a subjective, at times surprisingly intimate portrait of the band, this five-disc set of newly remastered recordings presents the four albums in order, each tagged with relevant extras, adding a fifth disc of non-LP singles. Organised in this way, the boxset documents the band’s evolution from a tentative recording unit haphazardly honing a distinctive sound into a sure-handed studio band with more on its mind than coming up with the next crowd-pleaser.

The self-produced First Step, recorded during their getting-to-know-you phase and released in early 1970, finds the bandmembers locating their sweet spot – the interplay of Stewart’s rasp, Wood’s evocative slide work and McLagan’s B3 churn. The tasty recipe is most appealingly represented by “Flying”, their very first studio foray; Wood and Lane’s Band-like ballad “Nobody Knows”, sung in unison by Stewart and Lane; and a suitably rustic cover of Dylan’s “The Wicked Messenger”. It also reveals a band in need of some serious editing, as five of the 10 tracks stretch out for five minutes or more. The most intriguing of the five previously unissued bonus tracks are the raucous blues-rocker “Behind The Sun”, cut in LA two months after the album’s release, and a live-at-the-Beeb “Shake, Shudder, Shiver”, their slithering grooves betraying the band’s fondness for Free.

Rod Stewart is on the cover of the current issue of Uncut; talking about the Faces and more; click here for more details

By the time they returned to the studio to cut Long Player, they’d toured extensively, and the two segments of the band had begun to cohere, but at the same time they’d had precious little time to write together, and the album stands as a classic case of the sophomore slump. The inclusion of two extended live performances failed to disguise the paucity of first-rate material. The most revelatory Long Player bonus track is a raw-boned live-in-the-studio run-through of the rockabilly chestnut “Whole Lotta Woman”, which is preceded by a few seconds of raucous banter in a microcosm of the Faces’ freewheeling bonhomie.

Clearly, the band needed help on the other side of the glass, and they got it from Glyn Johns, perhaps the greatest British rock producer, who proceeded to transform them on 1971’s A Nod Is As Good As A Wink… To A Blind Horse and 1973’s Ooh La La into a two-pronged studio unit, balancing the taut though seemingly ramshackle blues’n’boogie of “Stay With Me”, “That’s All You Need” and “Borstal Boys” with Lane’s poignant, folk-infused “Debris”, “Glad And Sorry” and “Ooh La La”, which collectively comprise the gold standard of the band’s recordings. Solid rehearsal takes of “Borstal Boys”, “Silicone Grown” and “Glad And Sorry”, along with the Johns-produced single sides “Skewiff (Mend The Fuse)” and “Dishevelment Blues” on the Stray Singles disc provide a satisfying complement to the latter LP. All nine of the collected singles are on Five Guys Walk Into A Bar, but it’s useful to have them in one place.

Between the orderly new overview, with its 15 previously unissued tracks, and McLagan’s engagingly hodgepodge insider’s portrait, we now have as complete a picture as we’re likely to get. Barring the miraculous discovery of a live recording from the band’s triumphant 1972 arena tour, or at least a long-overdue set dedicated to the BBC Sessions, the Faces’ peak moments are consigned to the dustbin of memory. In the case of this underrated, misunderstood band, you had to be there.