Just one of the reviews from the launch issue of our brand new magazine, 'Uncut DVD'. 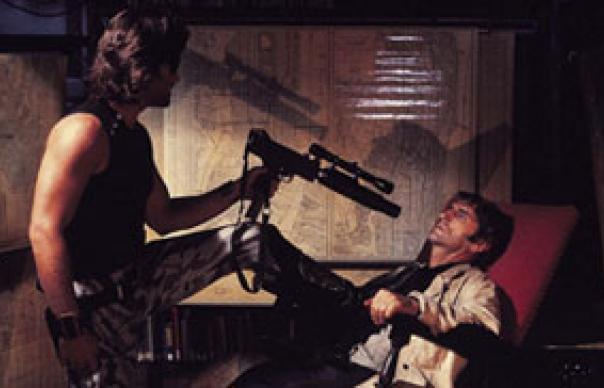 As you know, ‘Uncut’ magazine is dedicated to bringing you the best features, reviews and interviews on the greatest names in music and movies.

So now we’ve launched ‘Uncut DVD’ – a magazine devoted to covering the hottest classic and contemporary movie releases on DVD and bringing you the amazing stories behind the greatest movies ever made.

We’ve included one of the reviews from the launch issue below, it’s ‘Escape From New York: Special Edition’.

Find out more about the launch issue of Uncut DVD

The first time we see Kurt Russell as Snake Plissken in John Carpenter’s anarchic, blackly comic sci-fi adventure movie, they’ve got him in manacles, the meanest motherfucker in the valley, every gun in the room pointing at him. He is, in Carpenter’s words, “the baddest guy on the planet.”
Fans Of Escape From New York will know that Snake is a highly-decorated former Special Services officer (the Black Flight unit, who saw heavy fighting at Leningrad in the ongoing conflict between the US, Soviets and Chinese), a war hero who has indeed gone bad – to the extent that after an attempt to rob the National Federal Reserve, he’s now looking at a life behind bars. The same people will also know the entire first reel of the original cut of the film actually showed the heist and Snake’s capture, Snake taken by the cops when he could have run for it, trying to rescue a wounded buddy. It was eventually cut by Carpenter because it gave Snake too much back story, explained too much about who he is and why he’s so grimly disaffected.

The entire sequence is available for the first time on this handsomely packaged two-disc anniversary edition, and while it’s fun for completists to finally get a glimpse of the missing footage, you’d have to agree with Carpenter and Russell – whose droll and informative commentaries on the DVD extras are an absolute gas, the pair of them guffawing their way infectiously through the film – that the scene is superfluous, and Snake works better as the elemental character we know from the film’s theatrical release – Snake the coolest anti-hero ever, Dirty Harry in biker leathers, a Presley sneer and a piratical eye-patch, a nihilist sociopath with a loathing for authority matched only by Carpenter’s own.

As Carpenter points out more than once in his commentary, Escape From New York is often mistakenly thought of as a big money production, when the truth is that compared to the mega-buck budgets of today’s high concept action movies it was made for not much more than the change in his pocket. It’s testament to Carpenter’s film-making ingenuity – one tracking shot, he explains, starts in New York and after he ran out of location time there continues via a timely dissolve in Los Angeles – and the craftsmanship of a first-class team of matte artists, miniaturists, model workers and animators, who in the pre-CGI says of 1980 realised his vision of a futuristic New York, the whole of Manhattan in the film’s great conceit a maximum security prison, a dumping ground for America’s undesirables, sealed off from the rest of the country, a lawless nation, inhabited by the cheerless damned, a gap-toothed throng led by Isaac Hayes’ proto-rapper, The Duke Of New York.

All of which is bad news for American president Donald Pleasance, who’s trapped there after bailing out of the hi-jacked Air Force One. The future of the world, as Lee Van Cleef’s police commissioner soon explains, now hinges on getting him out and, of course there’s only one man for the job and his name is Plissken. What follows is hugely entertaining mayhem, with Kurt doing a great deal of snarling and lip-curling, here sending up Clint Eastwood, as he would John Wayne in Carpenter’s Big Trouble In Little China. There’s great support from Harry Dean, Adrienne Barbeau and Ernest Borgnine as a big band-loving cab driver, and Carpenter directs with uncomplicated urgency, a lean efficiency that recalls his beloved Howard Hawks and puts most modern blockbusters to a certain amount of overblown shame.

Extra: Terrific commentary from Carpenter and Russell, full of entertaining insight and fantastic trivia. Did you know, for instance, that the secret serviceman desperately trying to batter down the cockpit door of the hi-jacked Air Force One is Steve Ford, son of US President Gerald Ford? Want the low-down on a classic stunt called the Texas Switch? It’s here. Curiously neither has anything to say about one of the film’s most arresting sequences – a computer animation of the president’s plane being flown into a Manhattan skyscraper by terrorists. Elsewhere, there’s the deleted 10-minute bank robbery, further commentary from producer Debra Hill and production designer Joe Alves, trailers and a Return To Escape From New York featurette.

Find out more about the launch issue of Uncut DVD