First in a series of live documents, from a time when EC was a bit, well, tasty… 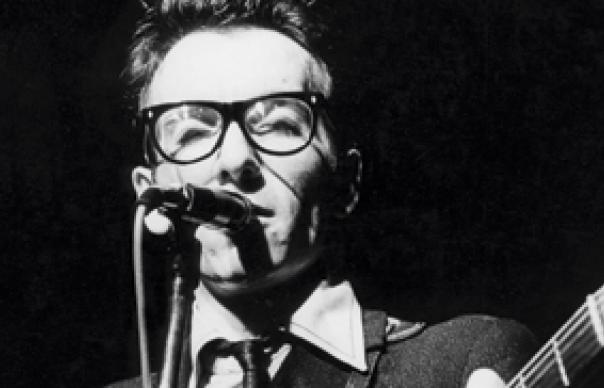 There are young people today who would find the idea of a dangerous Elvis Costello utterly implausible. What, that chummy chat-show host who writes operas in his spare time? Dangerous?! But he was. Between 1977 and 1980, Costello would have thought nothing of nailing your head to a coffee table while using sarcasm, dramatic irony and litotes. Boiling with rage behind misted-up specs, he contorted his body into geeky misshapes and spat out violently rhymed vendettas like a murderous Buddy Holly. Everything about him was geared towards putting the boot in.

Perhaps because he ended up travelling so far from it, Costello has a complicated attitude towards his past. His official line is that people should investigate as much music as they dare (jazz, classical, Latin) rather than wallow in nostalgia. All the same, he approves the reissue of his Stiff/Radar/Demon catalogue every few years, with ever more desperate reconfigurations of bonus tracks. An announcement of yet another Costello reissue campaign may seem hard to justify as Britain prepares to live on baked beans for the next three years, but the twist is that this particular series, scheduled to run for 12 months, is dedicated exclusively to live recordings.

The first release in the ‘Costello Show’ series is Live At The El Mocambo, a March 1978 concert by Elvis and his then-relatively new Attractions at a club in Toronto. Originally broadcast on a local FM station, and then released as a Canada-only promo LP, the recording was widely bootlegged in the ’80s before finally being issued as part of a 1993 boxset. In Costello chronology, Live At The El Mocambo falls between debut LP My Aim Is True (which North Americans had been able to buy since November 1977), and This Year’s Model, which came out in Britain 11 days after this gig. Costello and the Attractions – Steve Nieve (organ), Bruce Thomas (bass) and Pete Thomas (drums) – were supposedly promoting My Aim Is True, but were clearly keen to get audiences acclimatised to This Year’s Model, performing seven songs from it (in a 14-song set), plus “Radio Radio”, which would appear on US editions of that album.

Costello, who was 23 at the time, had been hailed by critics across the Atlantic as a passionate, soulful newcomer in the Springsteen and Van Morrison traditions. With hindsight, it wasn’t quite that simple. We only have to hear his spoken introductions, in which his accent veers Jaggerishly from Cockney to Texan via Coronation Street, to appreciate that the young Costello was accelerating in several directions at once, seemingly anxious to find an identity only to demolish it. For the first third of this 51-minute concert, he appears to be waging war on the rave reviews for My Aim…, helping the Attractions (who hadn’t played on it) to attack its reputation for sophisticated songmanship like a sneering garage-band forced to do Top 40 covers. “Mystery Dance”, “Waiting For The End Of The World” and “Welcome To The Working Week” are a decent indication of how The Strangeloves might have sounded with Johnny Ramone on guitar.

When it was a bootleg, …El Mocambo was admired for its sound quality. Now it’s official, one must mention some serious drawbacks. The mix is trebly, the audience too loud. Steve Nieve is difficult to hear. This wouldn’t have mattered to Toronto radio listeners in 1978, but it matters now, because the Attractions featured Nieve’s organ as a lead instrument and sound rather lost without him. Much, much more irritating than that, however, are the constant whoops and yeehaws – often in the middle of songs – from an idiot in the audience who thinks he’s watching a stripper.

Approach this as an imperfect document of Costello’s once-dangerous nights, then. A sweaty photo taken at a time when he could get away with a joke about Canada’s former colony status (“We’ve come to ask for the country back”), and couldn’t have known what slings and arrows, and Bebe Buells and Bonnie Bramletts, lay just around the corner.