Elton reconnects with his original mentor, under the watchful eye of T Bone Burnett. And Neil Young guests! 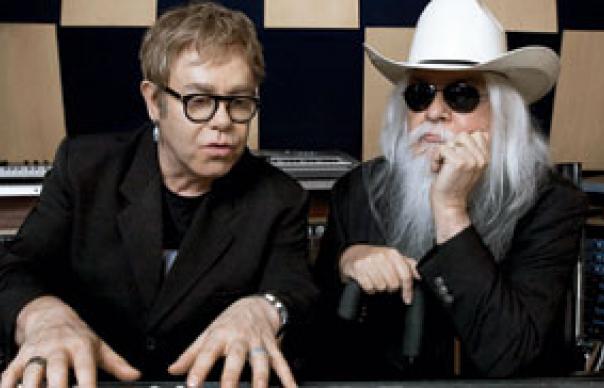 In the mid-’60s, while the teenage piano player Reg Dwight was breaking into showbiz, Leon Russell was building his rep as a top-flight LA session man and a key member of the legendary Wrecking Crew.

One night in August 1970, soon after he’d completed his job as the musical director of Joe Cocker’s Mad Dogs & Englishmen, Russell was among the curious folks packed into the Troubadour on Santa Monica Boulevard to check out a much-hyped young Brit, now renamed Elton John. Russell was impressed, and the feeling was mutual. “I copied Leon Russell, and that was it,” Elton admitted in 1971. Russell’s influence is readily apparent on rollicking uptempo songs like “Take Me To The Pilot”, “Amoreena” and “Honky Cat”. And when Elton broke in America it was with “Your Song”, the kissin’ cousin of Russell’s exquisite love ballad, “A Song For You”.

All of that makes The Union, Elton’s heartfelt, T Bone Burnett-curated attempt to give Russell his due, a matter of payback as well as a tribute. Not surprisingly, Elton and lyricist Bernie Taupin, with Russell frequently alongside them, chose to revisit the rustic terrain of Tumbleweed Connection, and their romantically imagined America locks in seamlessly with the 68-year-old Russell’s deep grounding in the real thing. A number of these freshly minted tunes would have fitted comfortably onto any of Elton’s early-’70s classics or Russell’s self-titled 1971 debut album, while the culminating “Never Too Old (To Hold Somebody)” and “The Hand Of Angels” reflect back on those days with a mix of “been there, done that” satisfaction and valedictory nostalgia.

The material is designed to showcase the principals’ piano playing, and skilled engineer Mike Piersante has set up the mic’ing and mix by putting Russell’s piano on one side of the stereo spectrum, Elton’s on the other, making the record a particular kick under headphones. Some of these cuts, including the adrenalised “Monkey Suit”, were built on top of basic tracks containing only Russell and Elton’s pianos, played perfectly in sync with each other. “No one uses two pianos on a record anymore, since Phil Spector, probably,” Elton noted.

More often than not during its 63-minute length, The Union sounds like an Elton John album, thanks to his signature melodies enwrapping Taupin’s image-filled lyrics, his still-powerful voice and undiminished presence. Only through repeated listenings does Russell’s Hoagy Carmichael-like lazy drawl assert itself, as he sings with disarming poignancy and tenderness, his always-grainy voice now as rutted as a dirt road. (Russell, it should be noted, underwent brain surgery shortly before the sessions began.)

For Burnett, who obsessively pursues aural authenticity, this expansive project – with its gospel choir, brass section and an all-star cast including Booker T Jones on Hammond organ and Robert Randolph on pedal steel, along with the producer’s own wrecking crew – is the antithesis of his monophonic, single-mic recording of John Mellencamp’s recent No Better Than This. The arrangements come closer to excess than any of Burnett’s recent productions – perilously close at times. There’s an over-abundance of ballads, some of which feel more ponderous than reflective, and wall-to-wall choral carpeting thickens passages that call out for spare, close-mic’ed intimacy. But these missteps are counter-balanced by the galloping rock’n’boogie of “Hey Ahab”, “A Dream Come True”, “Monkey Suit”, “Hearts Have Turned To Stone” and the elegiac resonance of “Jimmie Rodgers’ Dream”.

The most captivating slow-tempoed song is Taupin’s Civil War fable “Gone To Shiloh”, which plays out as a brass-encrusted New Orleans funeral march. Russell takes the first verse and Elton the third, bookending an appearance by Neil Young in a spine-tingling cameo. The pomp of the arrangement almost befits a Broadway production number, and yet its sheer gut impact is immense. If “Gone To Shiloh” isn’t the sort of track you’d go to on a regular basis, it seems tailor-made for special occasions. And that’s perfectly fitting, as this gathering of old-timers with something still to say, if not to prove, seems special indeed.
Bud Scoppa