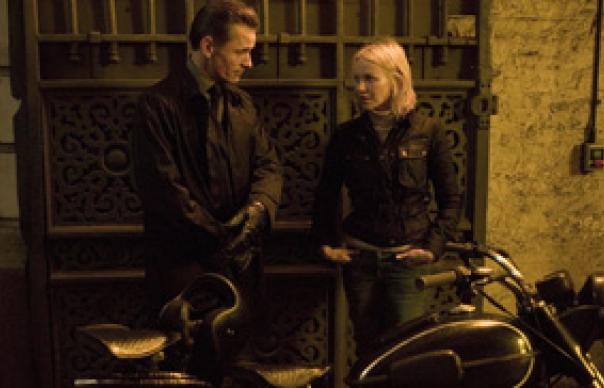 
PLOT SYNOPSIS
Nikolai (Mortensen) is a shady odd-job man for the Russian mafia in London. When a midwife (Watts) investigates the death of a young prostitute, trust amongst the “family” is tested. The dead girl’s diary yields secrets which unleash fury and vengeance.

THE first two scenes feature a graphic throat-slitting and a dying woman haemorrhaging prior to giving birth, so Cronenberg clearly feels his history of violence has not yet fully run its course. It’s disconcerting to find him filming in London, from a screenplay by Steve (Dirty Pretty Things) Knight: the Canadian renders the familiar creepy, something he’s always done masterfully. Here he takes Knight’s story of a hidden underworld of displaced immigrants, and paints it black. If you thought the organ-harvesting of Turks in Stephen Frears‘ film was a distance from the London tourist guide, you’ll be appalled at what the Russians get up to. Topical on the back of the Litvinenko poisoning, this explores sex trafficking, contract murders and the unique ruthlessness of the Soviet mafia.

Mortensen read a lot of Dostoevsky before tackling his second consecutive Cronenberg lead role. And he begins existentially subdued as Nikolai, a driver with a sideline in corpse-disposal for crime-lord Semyon (Armin Mueller-Stahl) and his erratic, hotheaded son Kirill (Vincent Cassel). “Ah, sentimental value”, he deadpans. “I’ve heard of that.” These are not men to upset, but motor-biking midwife Anna (Watts) does just that. She tries to trace the relatives of a girl who’s died in hospital, by translating her diary – a grotesque litany of rape, abuse and prostitution. Rashly, Anna, of Russian heritage, picks at scabs. Danger looms, but Nikolai seems to bend his bosses’ rules to protect her. He’s capable of chilling deeds, but only gradually reveals his full hand…

The film broods through scenes of constant rain and veiled threats in dodgy accents before exploding into set-pieces of overwhelming, bloody violence. Characters voice outrageous racist, homophobic and sexist beliefs (“slaves give birth to slaves”), which compound their callousness. Mortensen, whose initial shades-and-black-gloves posture is as subtle as stamping the word “sinister” on his brow, doesn’t flinch at removing dead men’s fingers, fighting two hitmen stark naked, or, in a very Cronenberg touch, extinguishing a cigarette on his tongue. If that’s a lift from Videodrome, the bleak mood recalls Spider while the bombshell twists echo eXistenZ. Tattoos resonate symbolically. It’s as uncomfortable as you’d expect, but set in a recognisable reality, from Chelsea-supporting football crowds (could that be a sly Abramovich-related joke?) to the skankier sides of Kilburn and Hackney.

It’s no classic, as the script’s socio-political specifics prevent it matching the allegorical heights of his last study of a mystery man’s motivations. Yet, hypnotic and somewhat queasy, it delivers the director’s trademark traumas in abundance.