Beefheart alumni reunite for another tilt at the cosmic blues 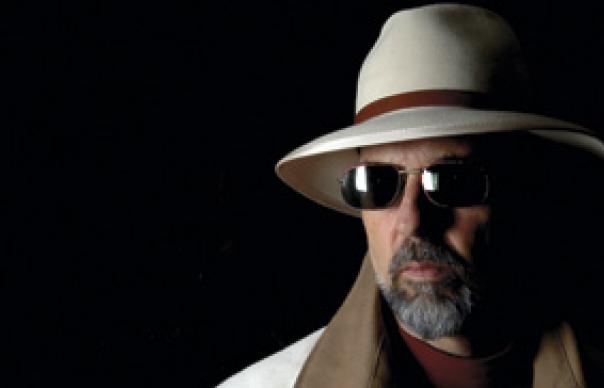 It doubtless stung when John ‘Drumbo’ French found the reformed Magic Band dubbed ‘a Captain Beefheart tribute group’. After all, the core of the MB’s ever shifting line-up – French on drums, Bill Harkleroad (aka Zoot Horn Rollo) and Mark Boston (aka Rockette Morton) – had always been way more than a backing band for the surrealist growlings of Don VanVliet (aka Captain Beefheart). Indeed, the recording of Beefheart’s fabled 1969 masterpiece, Trout Mask Replica, needed French to transpose its creator’s ideas into arrangements actually playable by the group.

Still, the Magic Band without the Captain at the helm has always been an odd creature, as evidenced by the collective’s unconvincing incarnation as Mallard in the mid Eighties, a project French claims was blighted by ‘low self-esteem from years of Van Vliet’s constant brow-beating’.

Whereas Van Vliet has forged a new career as a reclusive painter since the Beefheart years, the various MB alumni have largely remained in creative limbo. French, at least, has always kept busy – in the Eighties with the quartet French (Fred) Frith, (Henry) Kaiser and (Richard) Thompson, in the Nineties with solo projects before regathering the Magic Band in 2003. The group’s performance at Glastonbury the following year intrigued Proper Records’ Malcolm Mills, who encouraged them to write more new material.

City of Refuge is the result, its compositions revealing themselves to French in a burst of ‘pure inspiration’ rather than via the group think-tank originally planned. French still speaks highly of VanVliet’s ‘visionary music’, and Beefheart’s fingerprints are all over City of Refuge, with French’s vocals sometimes offering a striking approximation of the Captain’s rugged style, sometimes drifting into near parody.

Still, you can sit through the opening ‘Bogeyman’ and ‘Bus Ticket Outta Town’ half believing you’re back with the elastic boogie of the glory years. Bill Harkleroad and Craig Davidson (aka Ella Guru) get a channel each for their spindly, off-key guitar bursts, while French offers jazzy counterpoints and elaborate fills. French also gets to blow some smoking harp (his original role in the Band), and blows a cool soprano sax on the title track. Keyboardist John Thomas provides the bass lines on all but one track where Mark Boston (aka Rockette Morton) steps in.

Lyrically, French does his best to catch the jarring imagery of Van Vliet – ‘ Blood On A Porcupine Quill’ isn’t a bad tilt and ‘She’s a lusty old whore, The wicked witch of war’ has a convincing ring – but the band’s heart is clearly in playing rather than vocalising. The best moments arrive when the mood is experimental and the rhythms happily disjointed – ‘To The Loft of Ravenscroft’, a tribute to John Ravenscroft (aka John Peel) is a diversion that the DJ would have enjoyed. Elsewhere French leads the troupe into what suspiciously sounds like drum heavy prog rock – ‘The Shirt Off My Back’ is a case in point.

Does it add up to more than left-overs from a bygone era? If nothing else City of Refuge strikes a blow for musical intelligence and instrumental facility. Yes, it’s a tribute to the inspirational Van Vliet, but it’s also a tribute to the Magic Band itself, a troupe Fox feels were unfairly marginalised by ‘the spin Don put on the entire concept years ago – he never gave much credit to the players.’

That perceived imbalance will get a corrective jolt when French issues the first part of his history of the Magic Band next May. Entitled Beefheart: Through the Eyes of Magic, Volume I, its 400 pages will include interviews with a twenty odd former band members in a bid to present the ‘inside story’ of the Beefheart era. French also hopes that it will help him ‘put the past behind me so that I can concentrate on the present’. For the later enterprise, City of Refuge is a welcome opening blast.


UNCUT: The record is dedicated to John Peel. He must have made
an impression…

FRENCH: He was “the guy” in 1968 who introduced us in the UK, met us at the airports, drove us to concerts, gave us tips on surviving on the road, and was our mentor. We were overwhelmed by his generosity and charisma. His tearful introduction at the Middle Earth, our first concert in the UK, touched me deeply and never went away. He was just as wonderful to the re-united Magic Band, inviting us to perform at Maida Vale in front of a small group of fans. This did a lot to ‘legitimize’ us to the critics, and much of the “Where’s the Beef?” mentality was broadsided.

UNCUT: You still live in Lancaster? What’s the appeal of your home
town?

FRENCH: It’s extremely hot, too dry, and windy with bothersome dust storms. What’s not to like? I have wonderful lifelong friends and family here and there is a unique and subtle beauty in the desert. The barren landscape, much like the absence of strong musical influences, stimulates individualism as opposed to conformity.

UNCUT: You play a mighty big kit. Who is your favourite drummer?

FRENCH: 1. David Garibaldi of Tower of Power. His technique and his tremendous time-keeping make him a great inspiration. 2. John Bonham of Led Zeppelin. His style had SO much to do with their fantastic drive and his patterns are surprisingly difficult to master. 3. Stuart Copeland of The Police. He really moved me with his energy, speed, and absolutely meticulous style.

UNCUT: Can we expect revelations from your book?

FRENCH: I’m not sure that it’s a “page-turner” but I think that it’s going to set the record straight. I did things back then that I am ashamed of now, and I am sometimes painfully honest about myself and my colleagues’ mistakes. I hope that they will not be upset by my honesty. I think that is one the key elements which is most needed by the world. The other is unconditional love to overlook other people’s shortcomings.