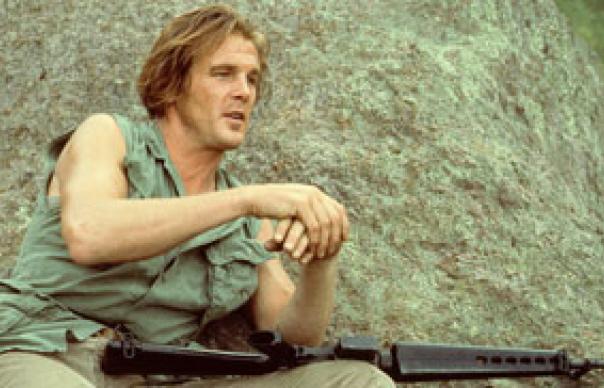 Retitled Dog Soldiers for the UK, 1978’s Who’ll Stop the Rain – based on the Robert Stone novel and directed by Karel Reisz – is a variant on Vietnam vets bringing the madness home. This madness is a consignment of Saigon heroin, and the enemy that the protagonists encounter back on American soil is as lethal as anything they might find in country. The late Karel Reisz elicited great performances from actresses – Redgrave, Streep, Lange – and not only does he get a definitively stoned performance out of Tuesday Weld, but he rescues Nick Nolte from lunkdom. Probably no-one after The Deep saw him as much beyond the ex-college football player he’d been. At 37, he seemed to be going nowhere until he was cast as Ray Hicks, a marine who read Nietzsche and, all alone on the deck of a ship returning from Vietnam, practised martial arts exercises. The part was the first of Nolte’s revelations. Here, he’s a man of simple loyalties to the flag and, above all, to his friends. John Converse, (Michael Moriarty) a war correspondent, is his buddy, and Hicks allows himself to be persuaded to smuggle two keys of uncut heroin back to the US. Converse’s justification is that “in a world where elephants are pursued by flying men, people naturally want to get high.” “I didn’t think we were that way,” objects Hicks.” “This is where everybody finds out who they are,” explains Converse. “What a bummer for the gooks,” replies Hicks. Great script. The first two drafts were by Stone himself. Back in San Francisco with the drugs, Hicks makes contact with Converse’s wife, Marge (Weld). Far from the deal being set up, she knows nothing about it and views life through a Dilaudid haze. Hicks takes over as the bad guys working for bent Narcotics Bureau agent Anthiel (Anthony Zerbe) move in. They’re lethal clowns, and Ray Sharkey, like Clu Gulager, Lee Marvin’s sidekick in The Killers, is memorably uncontrollable. Hicks seeks refuge in a deserted hippy commune in the mountains. It’s still wired for concerts, and there’s a touching scene where Hicks and Marge barndance to Hank Snow before the shootout begins. With Creedence Clearwater Revival blasting out over gunfire, you may be reminded of Michael Herr’s Dispatches in which rock and war are seen to run off the same current. The end is tragic.

If Hicks is gung-ho practicality, Converse is a soured, ineffectual intellectual. A typical Stone hero, he enjoys his ironic spin on quotes like “My desire is to serve God and grow rich like all men,” but the real man is expressed in the despairing statement, “I’ve been waiting all my life to foul up like this.” He and Marge are yoyos, and Moriarty and Weld play contemptible without qualms. The acting is superb. Reisz, never a flashy director, moves the camera in on Hicks’s face as Marge leaves him behind. “The love of my life, no shit. She didn’t even say goodbye. How about that?” And, tenderness over, he’s back in samurai mode again. “They got my buddy and they’re gonna kill that pretty lady. Now how am I gonna allow that!” He takes out their truck with an M-70 grenade launcher.

Not as good as the book is the usual complaint about movies. Well, Stone did worse with WUSA. Here, Reisz preserved the frightening story, made his best film, and if he mainly stripped Hicks down to Elmore Leonard’s Gunnery Sergeant in The Hunted, there’s enough left to hint at the intellectual depths of the novel.