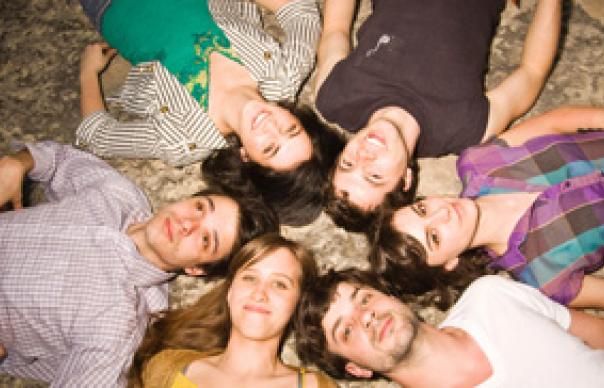 Just a brief perusal of the resumé of Dave Longstreth, former Yale student and benevolent dictator behind Brooklyn’s Dirty Projectors, will reveal that he is a conceptual kind of guy. Take 2007’s Rise Above, wherein Longstreth and band set out to rewrite Black Flag’s early US hardcore landmark Damaged entirely from memory. Or try Dirty Projectors’ 2005 album The Getty Address, a grand orchestral work featuring over 25 musicians, which revolved around a narrative inspired by the life of The Eagles’ Don Henley (with diversions that stop to ponder topics as diverse as the Aztecs, 9/11, and bird-watching). Or just listen to the music itself, which assembles bursts of African highlife guitar, the melismatic warble of US chart R&B, and all sorts of orchestral trimmings. Dirty Projectors are not a band that plugs in and plays: every inch is polished, every note arranged.

Talking about Bitte Orca in these terms, though, gives you little feel for their music. It primes you for something clever-clever, studied, excessively cerebral – and this, the fifth album under the Dirty Projectors name, is nothing of the sort. Rather, this is the group’s closest stab yet at transmuting their peculiar interests into joyful, ecstatic pop. “Cannibal Resource” is an impossibly sunny opener, setting Longstreth’s lilting, curiously androgynous vocal – think Scritti Politti’s Green Gartside, or a relaxed David Byrne – amid handclaps, bobbing bass, sweet chiming guitar and the powerful harmonies and reflected calls of co-vocalists Amber Coffman and Angel Deradoorian. “Can it ask a question/Can it sing a melody?” questions Longstreth, and the girls echo back in the joyful affirmative.

It is the presence of Coffman and Deradoorian, both technically accomplished singers, but capable of playing out Longstreth’s odder whims, that provides Bitta Orca with its mostly simply beautiful moments. Coffman takes the microphone on “Stillness Is The Move”, a remarkable organic take on the sparse, diva-fronted R&B pedalled by the likes of Timbaland late last decade – think Aaliyah’s “One In A Million” – that sees her remarkable voice fluttering up to the rafters. Deradoorian, meanwhile leads on the following “Two Doves”, a cut of fairy-tale chamber pop that hides a sharp thorn of heartbreak within flourishes of finger-plucked guitar and billowing strings.

Hunting for a common lyrical thread here feels a little futile, but “Temecula Sunrise” feels to be Longstreth’s stab at writing a song about the American working-class experience – albeit, one that has more sonically in common with the preppy Afro-pop of Vampire Weekend than any more traditional blue-collar rock staple. “I live in a new construction home/I live on a strip beyond the dealership, yeah,” he sings, as acoustic guitars intertwine. But by verse two, he’s professing the open hand of friendship over handclaps and highlife guitar: “Definitely you can come and live with us/I know there’s a space for you in the basement, yeah/All you’ve gotta do is help out with the chores and dishes…” “Remade Horizon”, too, seems rooted in the topography of suburban America, the lyrics a vignette of back yards, freeways, and parking lots – although again, the arrangements are anything but, vaulting melodies and big choral swells that sight some sweltering Eden amid the sprawl of concrete and malls.

Only a couple of tracks outstay their welcome: “Useful Chamber” is a little patchwork in its formation, jolting between long, meandering passages and excessively tangled rock-outs, while the closing “Florescent Half Dome”, with its meandering keys and echo-treated drum fills, is – whisper it – a little Phil Collins. Dave Longstreth still isn’t making it easy for you to love his band – indeed, that you must make a little effort is probably a point of honour for him. Still, as a whole, Bitte Orca feels nothing less than a modern equivalent to Talking Heads’ Fear Of Music or Scritti’s Cupid & Psyche 85 –art-rock with intellectual rigour, borderless curiosity, and no fear of the mainstream. Pop, by any other name.