Diary Of The Dead

George A Romero's neat reboot of his Zombie franchise 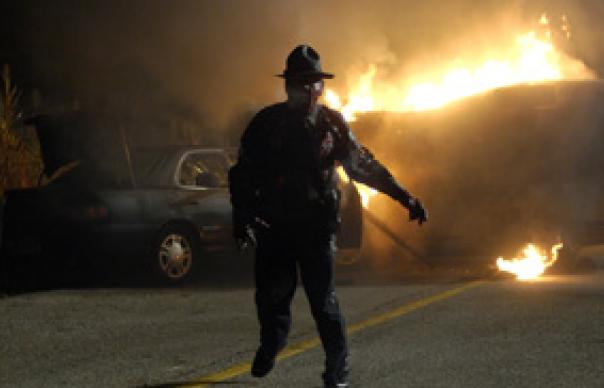 
George A Romero‘s zombie trilogy – Night Of The Living Dead (1968), Dawn Of The Dead (1978) and Day Of The Dead (1985) – were remarkable for dealing with a hot-button topics in a pulp-horror framework. Night tackled racism, Dawn satirised consumerism, and Day was a scathing attack on America’s growing obsession with survivalism. So when 2006’s long-awaited Land Of The Dead merely took a pop at – oh, la – gated communities, it began to seem that Romero’s once-killer instincts had deserted him.

Happily, Diary Of The Dead marks a return to form, a loose reboot of Night, where a bunch of Pittsburgh film students shooting a low-budget mummy movie in woodland hear the first news reports that the dead are coming back to life. Director Jason (Close) subsequently documents every event with his video camera, much to the annoyance of his girlfriend, cast and teacher, who accompany him on a cross-country trip to find safety.

Keeping the violence down to a few satisfying set pieces, Romero has in his sights the current fascination with citizen journalism and the significance of net culture (specifically YouTube and MySpace) in a numb, post-9/11 society. But though there’s plenty of jerky camerawork, this doesn’t aim for the frenetic pace or heightened sense of panic of, say, Cloverfield, since Romero’s film is actually presented as a film-within-a-film -an amateur but fairly slick faux documentary called The Death Of Death that’s been put together, de facto, from Jason’s footage. And although it uses similar tricks to Brian De Palma‘s upcoming Redacted – surveillance-camera footage and website clips – it weaves them together with greater sense and plausibility.

What Romero is essentially doing here is creating a whole new environment in which to stage his zombie invasion. The novelty isn’t exactly in the form but lurking in the content: we know very well what kind of explicit viscera to expect from him and effects master Greg Nicotero, who supervised the nauseating car crash carnage in Quentin Tarantino‘s Death Proof. Which means the pleasures here are almost Victorian in their simplicity, like a very nasty puppet theatre, in which bows, machetes and even a bottle of hydrochloric acid are put to use within the restrictive single-camera set-up, leaving the breathless viewer wondering, how did they do //that//?

As a franchise reboot, it’s an apt, revitalising idea, but, mostly, Diary works because Romero has rediscovered his pulp roots by once again using a cast of game unknowns. They bring his hammy B-movie world to life, making this lurid but intelligent romp far more of a piece with the trilogy than the misbegotten Land.