Derek And The Dominos – Layla & Other Assorted… 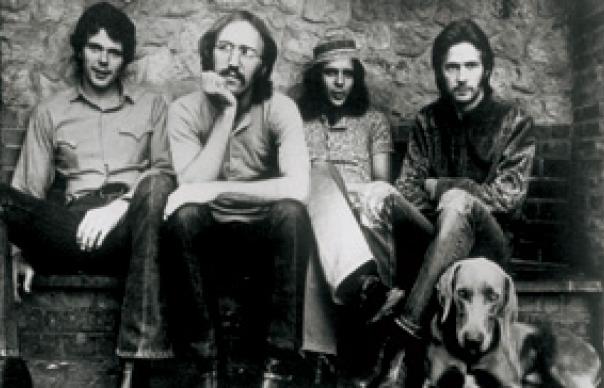 A funny thing happened to Eric Clapton while he was playing God in Britain’s first supergroup, Blind Faith. On the band’s only tour of America in 1969, he discovered that there was a lot more fun to be had further down the slopes of Mount Olympus, making music in the foothills with support group Delaney & Bonnie.

Clapton had grown obsessed with the kind of rootsy Americana he had first heard in the summer of 1968 on Music From Big Pink. It was a moment of revelation that led to the break-up of Cream: he even paid a call on The Band in Woodstock to ask if they had a place in their line-up for another guitarist. They didn’t. But Clapton found an alternative playing behind Delaney and Bonnie Bramlett, a husband-and-wife duo backed by Carl Radle, Jim Gordon and Bobby Whitlock whose engaging American roots-rock drew on a rich mix of country, soul, blues and gospel influences. In effect, Clapton split Blind Faith to elope with Delaney & Bonnie. He continued to tour with them into 1970, by which time their ad hoc backing band had grown to include further disciples such as Leon Russell, Rita Coolidge, Bobby Keys, George Harrison and Dave Mason. At the end of the tour, Clapton went to live with the Bramletts in their home at Sherman Oaks, CA while Delaney produced his self-titled solo debut.

Eventually he found his way back home to England, where one day in the early spring of 1970 he received a call announcing that Radle (bass), Gordon (drums) and Whitlock (keyboards) had all quit Delaney & Bonnie in a row over money and were looking for a new gig. Clapton was not planning to form a new group. But he invited them over, anyway. In the account he gave Uncut last May, he claimed they stayed in his house for a year, during which time they evolved into Derek And The Dominos. In fact, it can only have been a few months for, by August, 1970, they were in Criteria Studios, Miami with executive producer Tom Dowd recording their first and, as it turned out, only studio LP together.

The pseudonym “Derek” was adopted to reflect Clapton’s stated desire to be one of the boys in the band rather than a Zeus-like hero. His new colleagues were a tight unit whose forte was locking into a simmering groove and Clapton slotted in well, content to subdue the showboating of his solos and play as part of an ensemble, just as he had learnt to do when backing Delaney & Bonnie. Despite this, it was still clearly Clapton’s band, if only because most of the songwriting impetus came from him. He had never been a prolific songwriter, playing second fiddle to Jack Bruce in Cream and Steve Winwood in Blind Faith. But now, inspired by his unrequited love for George Harrison’s then-wife Patti Boyd, he came up with at least four classics in “Bell Bottom Blues”, “I Looked Away”, “Why Does Love Got To Be So Sad?” and, of course, “Layla”. Initially, the album seemed constrained by the low-key modesty Clapton craved. Then, halfway through, the unscripted arrival of Duane Allman turned plans upside down. Within 10 days, they’d completed an inspirational double that wildly exceeded their expectations, a perfect blend of dedicated muso craft and spontaneous creative alchemy that makes Layla & Other Assorted Love Songs one of the landmark albums of Clapton’s career.
At the time, all Clapton knew about Allman was that he’d played the guitar solo at the end of Wilson Pickett’s “Hey Jude”. But, by pure chance, the Allman Brothers were performing in Coconut Grove while the Dominos were recording in Miami and Dowd took Clapton to see them. The two guitarists struck up an immediate affinity and, when Allman was invited to join the sessions, his Promethean qualities totally transformed both the ambition and the execution of the record.

Clapton had long wanted a guitar partner (he had initially invited Dave Mason to join the Dominos) and Allman fired him up on such blues work-outs as “Have You Ever Loved A Woman?” and a magnificent tribute to Hendrix on “Little Wing”. Much of it was spontaneous, first-take stuff and the notion of toning down the solos disappeared out of the studio window as Clapton and Allman circled each other and then soared into the stratosphere. Yet the contribution of Radle, Gordon and Whitlock shouldn’t be overlooked, either. Without the solid base they had built with Clapton over several months rehearsing at his Surrey home, the magic dust Allman sprinkled all over the record would have fallen on barren land.

Clapton enjoyed one more outrageous stroke of fortune, and it came not from Allman but courtesy of Gordon. Returning unexpectedly to the studio one night after-hours, he found the drummer alone at the piano picking out a haunting, minor-key melody that he was recording for use on a solo album. As Clapton was paying for the studio time, he promptly commandeered the tune and appended it as an instrumental coda to a song he had written called “Layla”. The original composition was potent enough to become an FM radio staple on its own. But with the addition of Gordon’s plaintive piano movement, over which Clapton and Allman wove filigree guitar lines, it became a staggering piece of music.

During the making of Layla…, Clapton and the Dominos began using heroin heavily. It’s difficult to discern any specifically narcotic influence on the album, but some sort of curse of doom seems to have been unleashed. On tour, the atmosphere swiftly turned toxic and, soon after they began recording a second Dominos album in London, a disenchanted Clapton walked out. Five tracks from the sessions eventually turned up on his 1988 box set Crossroads, and they confirm how completely the spirit had gone. Allman died in October 1971. Radle followed in 1980 when his kidneys gave up. Gordon’s solo album was never completed. Complaining of “hearing voices”, he was diagnosed with acute paranoid schizophrenia. In 1983 he murdered his mother and has spent the years since in a mental hospital. Whitlock made a series of unsuccessful solo albums before retiring to spend the ’80s and ’90s on a farm in Mississippi.

And Clapton? Despite his protestations that he wanted to be a team player and just one of the boys, he stole Delaney & Bonnie’s band and he stole Jim Gordon’s best tune. After she had inspired “Layla”, he eventually stole his best friend’s wife, too. What good it did him is another matter. He failed to lure Duane Allman away from his family, and Layla & Other Assorted Love Songs failed to chart. After the Dominos split, Clapton’s own heroin habit grew to such chronic proportions that he abandoned music for the next three years. By the time he returned, Allman was dead. Clapton never again found such an effective musical foil.