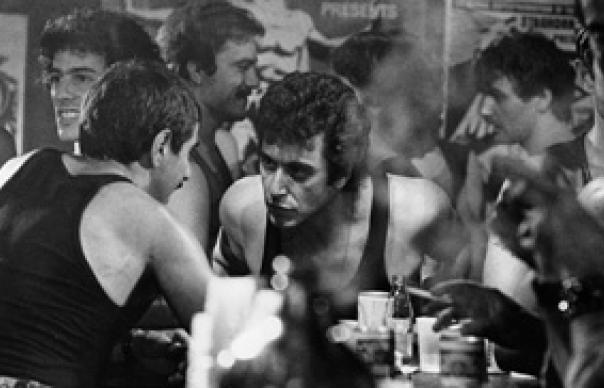 By 1979, when producer Jerry Weintraub gave him the chance to adapt Gerald Walker’s 1970 noir novel, Friedkin was coming off the back-to-back box office failures of The Brink’s Job and Sorcerer, and badly needed a hit. Inspired by a real ’60s murder case, Walker’s novel offered an opportunity to revisit the gritty urban terrain of Friedkin’s breakthrough, The French Connection. Pacino, too, whose career had been in a slump since Dog Day Afternoon four years earlier, may have thought he was signing on for a funky, edgy undercover-cop movie in the Serpico mould.

But Friedkin had other ideas. While researching The French Connection, he’d overheard many seedy war stories from undercover detectives about the Manhattan gay scene. Simultaneously, he’d become obsessed by a new string of killings centred on Greenwich Village’s leather bars, mutilated body parts washing up in the Hudson River. Throwing out Walker’s novel, he fashioned a new script, fleshed-out (literally) by enthusiastic research into the coded S&M subculture; as he explains on this disc’s commentary, Friedkin toured the clubs, sometimes wearing only a leather jockstrap.

When his grisly and explicit script was leaked, protests came from right-wing moralists and gay-rights campaigners alike. The latter, objecting to sensationalistic stereotyping of gay life, encouraged activists to disrupt the shooting. As cameras rolled, picketing protestors were literally clashing with police just out-of-frame. Far from a comeback, Pacino discovered he was starring in the most controversial movie ever filmed in New York. The relationship between director and star rapidly deteriorated; notably absent from the new DVD’s Extras, Pacino’s barely mentioned the movie since.
Shot in a hate-storm, Cruising’s tone is set by the opening sequence: a dismembered arm floating in the Hudson, followed by a vignette in which two misogynist, homophobic cops orally rape transvestites. The first murder – with the victim hog-tied naked on a bed – comes soon after. Then things get weird. Picking up another guy, the murderer himself becomes a victim. Then this second killer, too, gets murdered. And so it goes.

Rejected on release in 1980, Cruising is deeply flawed, often embarrassingly bad. But it is also weirdly compulsive, and not simply for unintentional laughs, although, believe it, there are many. Rendered almost incoherent both by the censor’s cuts (the footage now seems lost) and Friedkin’s stubborn refusal to explain himself, it remains strangely enigmatic. Genuinely troubling in its handling of sex and violence, it would never get made in Hollywood today. Cruising has a rare, clammy, heat – the bleak fever dream of a director fatally hooked on his own lurid, vivid, imagination.