Neil Gaiman fantasy from The Nightmare Before Christmas director 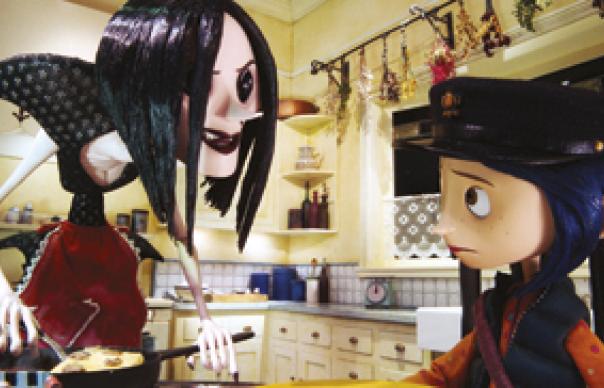 Author Neil Gaiman is best-known for dusting down and retooling old fairy tales – in best-selling comic book series The Sandman and novels like American Gods. But Coraline, his 2002 children’s novel, is arguably Gaiman’s first attempt to create one entirely of his own. Coraline Jones (Dakota Fanning) and her parents move into a new house in Oregon; left to her own devices, Coraline finds a bricked-up door leading to a perfect replica of her world, populated by doubles of her parents and neighbours. There are certain significant differences, though. Her Other Mother (Teri Hatcher) is more attentive than her work-driven real mother. And, pertinently, she has black buttons instead of eyes. And she wants to sew buttons onto Coraline’s eyes, too.

Artfully shot in stop-motion 3D by The Nightmare Before Christmas director Henry Selick, Coraline packs a lot in. There’s vivid supporting characters, plus a number of set-pieces that look particularly striking in 3D. Admirably, it never condescends, and the subtexts about child abduction and the nature of maternal love identify Coraline as something measurably apart from what traditionally passes for “kids” films these days.