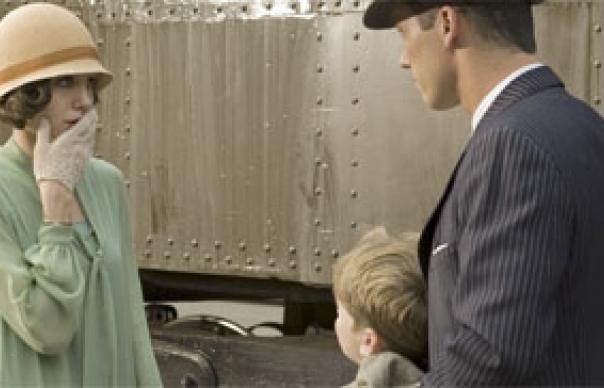 Los Angeles. March, 1928. When single mother Christine Collins is called in to work at short notice, she leaves her nine year-old son Walter at home, alone. When she returns, he’s disappeared. What follows exposes police corruption and “the biggest crime in Los Angeles history”…

As Hollywood occasionally likes to reminds us, there’s plenty of dirt lying around in its own back yard. It’s certainly true of the studio’s Golden Age, where on one hand there’s fur-lined glamour and impossibly beautiful people up on-screen while scandals, deaths and excesses lurk just out of shot. Los Angeles itself is in the triumphant throes of the oil and movie boom, the population hitting one million in the 1920s; meanwhile, the police force is endemically corrupt. As John Malkovich’s community activist Reverend Briegleb comments early on: “The City of Angels has become a place where our protectors have become our brutalisers.”

Eastwood explores the link between Hollywood and the grim doings down on the streets of LA with his usual, unhurried pace. The film opens with a crackly, vintage black and white Universal logo; conversations drift to gangster movies (one of the first lines in Changeling is “Up against the wall,”); there’s banter about what might win at the Oscars. And, as surprising as this may seem, one of the most crucial plot points revolves around Tom Mix’s beloved Tony the Wonder Horse.

The casting of Angelina Jolie finds Eastwood tacitly acknowledging a link, too, between Old Hollywood and its modern day version. In a bonnet with a bob, Jolie looks remarkably like a Golden Age film star herself; extraordinary, you might think, considering the way looks, fashions and the requirements of movies have evolved over the last 80 years. And as grim events in the film unspool, Jolie’s Christine Collins increasingly resembles a damsel in distress in a B-movie melodrama.

You might be tempted to think, as you’re watching Changeling, that this is the stuff of B-movie pot-boilers. A nine year-old boy, Walter, is abducted in early 1928, then reunited with his mother by the LAPD five months later, only for the mother to reject him, claiming he’s not her missing son. “You’re in shock,” explains JJ Jones, a captain in LAPD’s juvenile investigation unit. “Take him on a trial basis. Trust me.” Later, a doctor wheeled out by the LAPD, claims: “His identity has been confirmed by the finest minds in child identification.” Christine continues to disagree, pointing out that the boy is three inches shorter than when he disappeared, a dental defect has miraculously been rectified – and he also appears to have been circumcised during his abduction. “There is a perfectly sound medical explanation for this,” say the authorities. “I’m the mother!” explodes Christine. “Which means you’re not best placed to objectively agree on this…” comes the sinister, Kafkaesque reply.

For the first half of the movie, Eastwood keeps tight focus on Christine and her tragedy. He shoots events – however horrific they become – with a matter-of-factness that brings to mind one of his great mentors, Don Siegel. As Christine is subjected to all manner of humiliations, and the storyline takes a particularly grim turn, Eastwood never turns up the theatrics: it is what it is.

But the film isn’t just about child abduction (also the starting point for 2003 Mystic River). It’s also concerned with the sickening treatment of a woman by an opportunistic and chauvinistic police force. The LAPD, eager to get some good press, wheel out reporters to cover Christine’s reunion with Walter. “I hope you’ve been treated well by our department,” Police Chief James Davis tells her in private. “And you won’t have any trouble telling that to the press.”

As it becomes clear the boy is not, in fact, Walter, the LAPD attempt to silence Christine, ostensibly to cover up their own mess. They suggest, as a single mother, she’s incapable of looking after the boy; or is attempting to scam the state. “What are you trying to do?” Asks Captain Jones. “Make a lot of fools out of us? Are you trying to shirk your duty as a mother and have the state provide for your son?”

She’s incarcerated in County Hospital, where she’d presumably be left to rot. At one point, the authorities consider Electro Convulsive Therapy. It’s only down to the niggling of Reverend Briegleb that she’s released. Malkovich, in a frankly extremely distracting hairpiece, is reliably good in what really amounts to an extended cameo.

Understandably, it’s heartbreaking stuff. And what happens later, up at a remote chicken ranch near Wineville, California, doesn’t ease Christine burden any. That this is all based on real events makes Changeling all the more shocking.

It’s hard to think of another director, so late in their career, who consistently continues to delivery films of the heft and quality of Eastwood. And certainly one who is commendably unafraid to tackle big themes, from euthanasia (Million Dollar Baby) and war (Flags Of Our Fathers and Letters From Iwo Jima) to child abduction and police corruption (Changeling). Eastwood’s great skill is an intuitive ability to distil major issues down to a personal level; we see everything here through the eyes of Jolie’s fragile and dignified Christine. Having seen Jolie earlier this year, buffed to perfection as an assassin in the dreadful action flick Wanted, the transformation is incredible, and she did similarly great work in Michael Winterbottom’s A Mighty Heart.

By 1935, when Changeling ostensibly finishes, Christine and her boss bet on who’ll win Best Picture at that year’s Academy Awards. Her boss opts for Cleopatra. Christine selects the Frank Capra romantic comedy, It Happened One Night. The irony of the title can’t be lost on Eastwood, though Christine Collins’ thoughts were never recorded.