Bruce Springsteen- We Shall Overcome: The Seeger Sessions

Another Bruce rejuvenation, as he grapples with the songs of folk patriarch Pete Seeger 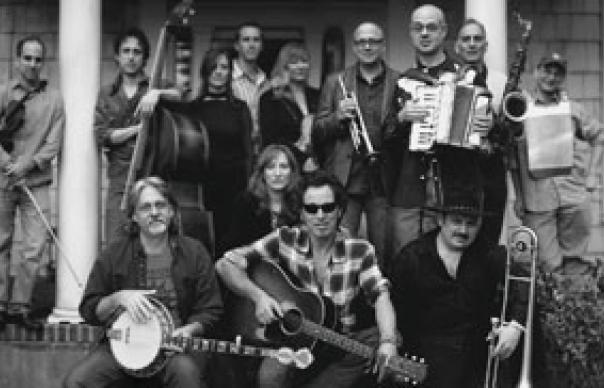 On paper it sounds like a worthy chinstroker: Bruce trading in his Woody Guthrie affectations to pay tribute to Woody’s onetime running mate, Pete Seeger. But as soon as a lusty clawhammer banjo introduces the opening “Old Dan Tucker”, it’s obvious this is a world removed from The Boss in his familiar role as an earnest, sparsely accompanied. check shirt-clad troubadour.

There’s an irresistibly woozy horn section sashaying about, for starters, a constant presence through the 15 tracks that sounds born and bred deep in the bayou. Springsteen fronts an 11-piece band (first convened for two tracks on a 1998 Seeger tribute album) that swing as wildly and freely as The Pogues in their hell-for-leather glory. So wildly, in fact, that The E Street Gang suddenly sound tired and jaded. And then there’s Bruce himself, lustfully rolling out the lyrics about “the dirty little coward” before biting down hard on “Jesse James”, while the band play with abandon, mixing a Cajun two-step with a Mexican percussion fiesta. It all adds up to a great teeming flood of Americana: the streams of high mountain Appalachian bluegrass, running into Afro-Caribbean swells and bluesy stomps and hollers.

The legacy of another flood, the one occasioned by Hurricane Katrina, emerges time and again. Not just in the abundant New Orleans musical references, but in the apprehension of “the mighty river” rolling in the prayerful “Shenandoah”, the acknowledgment that there’ll be “No more water/Fire next time,” in the defiant gospel chorus of “Jacob’s Ladder”, and of course in the Civil Rights-bred resilience of the slow-burning title track.

Seizing upon the joyful openness – rather than the pinched, puritanical elements – invoked by Seeger’s excavation of the common songbook, Springsteen glories in a new life. Freed from the need to write songs to respond to events, a la The Rising, The Seeger Sessions is a powerful example of how songs reverberate through the years to accrue contemporary meaning.

Certainly it would be hard for Bruce, or anyone else, to devise on demand an anti-war plaint as pointed as “Mrs McGrath”, or a ballad of destitution and loss to equal “My Oklahoma Home”. Or, indeed, an account of the mating rituals of little creatures as mischievous and surreal as – yes! – “Froggie Went A-Courtin'”.

There’s really been nothing like this before in Springsteen’s career. One minute you hear a violin and guitar duelling like it was The Hot Club Of Paris in the 1920s. The next (“Oh Mary Don’t You Weep”, f’rinstance) the Crescent City funeral march is in full effect.

Recorded with a contagiously live feel at Springsteen’s New Jersey studio ranch, We Shall Overcome does the honourable thing by praising Seeger’s contribution while he’s still around. But as Pete himself would acknowledge, it’s really a tribute to the spirit of joy and resistance that has powered music, and the communities that create it, for years.