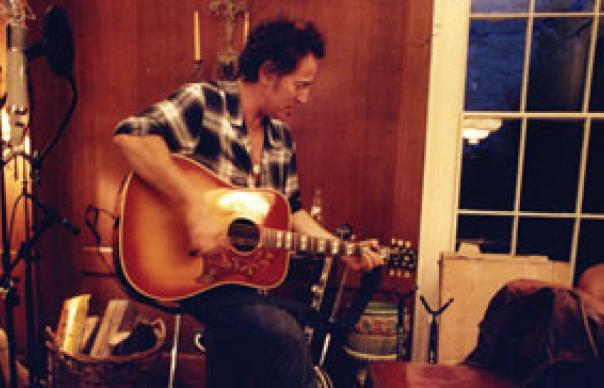 In these demographic-specific times, Springsteen’s desire to reach out and encompass a wider tradition than ever ironically means he gets smaller audiences. Yet the largest band of his career – the live incarnation of The Seeger Sessions album outfit – is the most the most mournful and celebratory. And, all due respect to the chaps and chappessses on
E Street, possibly the best.

You can’t see the most racially complex and gender-blended band of Bruce’s career on this set from Dublin barn The Point (recorded over three November nights last year). But you certainly can hear it – and also how much they had increased in fluidity and sense of purpose from their debut performance in New Orleans earlier that April.

Bruce’s connection to folk protest deepens, in righteously swaggering preacher and congregation style, on the epochal rewrite of “How Can A Poor Man Stand Such Times and Live”. A Depression era classic that Springsteen found on a Ry Cooder album and then amended with his own brilliantly Bush-baiting verse is perhaps the most politically extreme and, as hammered home here, exultant performance of his career.

Arguably even more profound, certainly as dramatic, is “Eyes On The Prize”. Gilded by pedal steel and prowling stand up bass, the duet between Springsteen and raw throated guitar player Mark Anthony Thompson is like Sinatra and Sammy Davis doing revolutionary Gospel.
The stately waltz of “If I Should Fall Behind”, a duet with Patty Sciafla, meanwhile brings the drama of the human heart into focus, while the choruses of “When The Saints Go Marching In” and “This Little Light Of Mine” rock free and easy.

In short, it’s everything Springsteen’s big-hearted thoughtfully impassioned take on Americana ever set out to be. Swing out sisters and brothers, swing out.