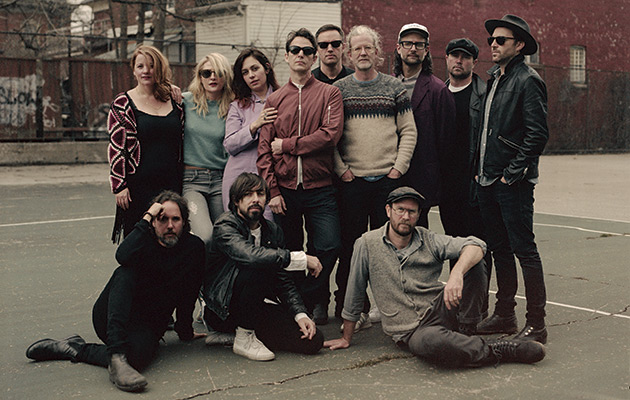 The initially striking thing about Broken Social Scene’s first release in seven years is that its title might have suited any of the four albums that preceded it, seeing as the Canadian collective may be one of the most warmly comforting bands of our time. Initially formed as a duo by Kevin Drew and Brendan Canning in Toronto at the end of the 1990s, Broken Social Scene soon grew into a unwieldy gaggle of pals, collaborators and ex- and current romantic partners, all of whom have come and gone depending on the demands of their other musical commitments – solo ones in the case of Leslie Feist and Jason Collett, bands for the various members of Metric, Stars, Do Make Say Think and many more. Live shows have rarely featured less than 10 members, sometimes more than 20, not including the guest stars. Playing Manchester’s Albert Hall the day after the bombing on May 22 this year, they were joined by Johnny Marr for a poignant performance of “Anthems For A 17-Year-Old Girl” from 2002’s You Forgot It In People.

As you’d expect, there’s a lot of touchy-feely togetherness among the many players who somehow squeeze onto these stages. But listeners become part of it too, such that on a good night – when the performance climaxes with a joyful clamour of group vocal harmonies and a wall of guitars – it can all feel like one long, unfeasibly large group hug.

The spirit of warmth and inclusiveness the band exudes seems more valuable as the years have passed, especially as it becomes clearer how the things meant to connect people may isolate them instead. “All along we’re gonna feel some numbness,” sings Feist in Hug Of Thunder’s title track, a moving yet suitably thunderous effort to reconcile the hugeness of the world we perceive in childhood with the narrowness we may feel at later stages. “Certain times in our lives come to take up more space than others,” she offers as consolation. “And time’s gon’ take it’s time.” A similar sentiment surfaces in “Gonna Get Better”, which uses an epiphanic swirl of techno-pop textures and smeary guitars and horns to support the semi-hopeful  notion that “things’ll get better ’cos they can’t get worse”.

The solace we receive from each other’s company serves as both the central theme and modus operandi for Hug Of Thunder, which follows yet another lengthy hiatus for the band. They only played four shows in six years, but somehow the gang reconvened last summer at a studio a few hours away from Toronto, with Drew and Canning accompanied by the Scene’s other three core members – Charles Spearin, Justin Peroff and Andrew Whiteman – and a dozen more friends, plus producers Joe Chiccarelli and Nyles Spencer.

The result contains some of the most exuberant and immediately engaging music they’ve ever recorded. Whereas its two predecessors – 2005’s Broken Social Scene and 2010’s Forgiveness Rock Record – suffered from a surplus of ideas and sometimes competing imperatives, Hug Of Thunder sees the band maintain a steadier focus and surer footing across 12 songs that may be the product of many hands but seem born of a shared vision. Arriving after the prelude of “Sol Luna” – a callback to the serene synth soundscapes of the project’s earliest recordings – “Halfway Home” is the first of the LP’s many instant anthems. It’s also another strong reassertion of Broken Social Scene’s equally fervent enthusiasms for indie-rock fuzz and major-key melodicism – “Protest Song” and “Stay Happy” are two  more that fit neatly in the band’s sweet spot between Abbey Road and Dinosaur Jr’s Bug.

Other songs are fuelled by a greater sense of urgency, of making the most of a moment that always passes too swiftly. A cryptic but still pointed critique of the false selves and empty desires fostered by social-media addiction, “Vanity Pail Kids” is driven by its pounding rhythm and menacing blasts of brass. There are shades here of Arcade Fire, peers from Montreal who certainly benefited from the terrain that Broken Social Scene helped fertilise for Canadian indie hopefuls at the start of the century.

It culminates – as it so often does for Broken Social Scene – with a crescendo of almost overwhelming intensity and then a gentler dénouement. Hug Of Thunder’s closer “Mouth Guards Of The Apocalypse” swells and surges with its expressions of rage and discontent (“Our heroes are dicks, we don’t pay to protect them”). But beneath the squall and rancour lies the simpler, possibly naïve hope that we might treat each other a little better. As Drew sings through a haze of distortion, “If you can’t help me,  then help someone like me.” If a hug would make a difference, he’d be quick to provide one. In any case, he and his friends have returned with music that feels just as comforting  and necessary.

Q&A
Kevin Drew
Broken Social Scene have gone on and off hiatus for nearly 20 years now – what pulled the gang back together this time?
I just think we missed the people. Obviously as anxieties grow in the world, you pull toward what you know, which is your friends. So we just put it out there that the [core] five of us were gonna get into a studio and start jamming and writing and everyone else was welcome. By the time we were finished, we had everybody. We worked really hard at collecting a lot of music and then we spent a lot of time trying to organise and get on the same page with everyone’s opinions about what songs should go on the album. There’s this trustworthy, melodic group-heartbeat we all understand. It’s there not just inside the studio, but at the dinner table and on the tour bus and outside in the world hanging out.

Was there a collective idea or emotion that guided you this time?
We were all feeling and singing about the same things. And it’s just a general theme across our lives, as with so many people out there. We’re feeling everything that everyone’s feeling as I see us getting bamboozled on a daily basis and anxieties, disorders, depression and addictions are just sorta taking over. So we wanted to create that anthemic, you-are-not-alone album, an album for the struggle – thus the title Hug Of Thunder.

It might also be your most focused and impassioned album – did you feel a real seize-the-day attitude, too?
There’s definitely an urgency to it. There’s an urgency to last longer than two weeks as the value of art slowly slips away – sometimes you just have to scream a little louder.
INTERVIEW: JASON ANDERSON