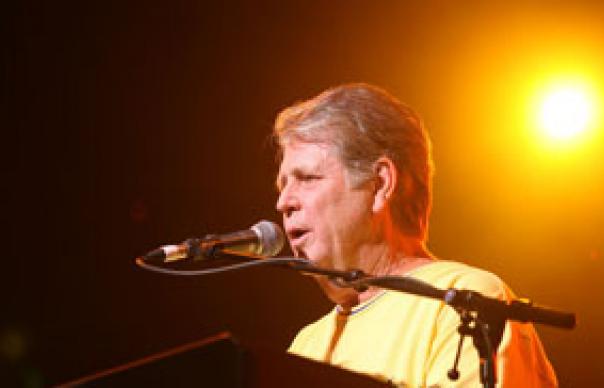 It almost seems like the history of the Beach Boys is a film running backwards, as the band become critically loved again, as even Dennis Wilson’s long-lost career is resurrected and remastered, and as Brian Wilson turns from husk to working talent once more. And now, after 2004’s guest-studded Getting In Over My Head, and 2005’s (i)What I Really Want For Christmas(i), here comes the latest re-instalment in Wilson’s career, a whole new album which, like contemporary Paul McCartney’s 2007 triumph, is recorded with his younger touring band.

That Lucky Old Sun is also something of a summation of Wilson’s greatest moments, one of those parallel universe greatest hits that artists of his age tend to put out. Van Dyke Parks is a collaborator on the spoken pieces which break up the songs. Wilson’s own history is referenced, sometimes with heart-breaking candour. The not-quite-concept feel of the solo Smile is mirrored in the track-listing, as is that album’s slightly too muscular production (one thing you do miss about the Beach Boys’ 1960s sound is its relative calm; Wilson and his band tend to sound like they just got back from the gym).

And of course, like Smile, this album is a recreation, this time not of a record but of a stage show. That Lucky Old Sun is as much a tour souvenir as it is a new album. It was almost certainly better live; it lacks a certain spontaneity, being first rehearsed and performed in toto before being recorded. There are other flaws, too; when not set to music, Parks’ words sometimes sound like bad beatnik poetry (“Pumps drunk with oil danced like prehistoric locusts on the hills to LAX/ People filled their tanks in flights of fancy”. Oh, did they now?). “Mexican Girl” is the most generic song about either a Mexican or a girl that I’ve ever heard (castanets are both mentioned and played). And the decision to root everything in ‘60s pastiche means that any desire Brian Wilson might have to stretch himself musically has been repressed in favour of a “look, this bit’s like Surf’s Up” ambience.

Then again, we’re lucky to have him, and while it might be nice to have a ‘90s stormer like Love And Mercy, or the imaginative byways of Van Dyke Parks’ collaboration with Wilson, Orange Crate Art, there are many good moments on this album, and some great ones. Despite the steroidy nature of the sound, Wilson brings a fantastic lightness to the title track, an oldie he clearly loves, and songs like “Morning Beat” and the in-no-way-self-referential “Forever She’ll Be My Surfer Girl” are pretty good. And if the album gets a little confusing in the middle narrative-wise (why are we in Mexico exactly?), at least it does so melodically, with the excellent “California Role” and the slightly daft “Oxygen To The Brain”. It may be Beach Boys pastiche, but Brian Wilson does Beach Boys pastiche better than anyone (and no, he isn’t the Beach Boys, as most of the great albums post-Pet Sounds clearly indicate; listening to some people bang on about “Brian”, you feel sorry for Mike Love, you really do).

But it’s the album’s final third which will make the Wilson massive go ape, and in this instance they’re absolutely right. “Oxygen To The Brain” shuffles off cheerfully, and then it’s right into the chugging a capella of “Been Too Long”, an echo of box set favourite “Can’t Wait Too Long”. Indeed, it leads into the equally Surf’s Up-ular “Midnight’s Another Day”, a song whose title sums up Wilson’s dark years perfectly as do lines (written, like most lyrics on this part of the album, by Brian’s band member, multi-instrumentalist Scott Bennett) like “took the dive but couldn’t swim” and “took the diamond from my soul and turned it back into coal”. It’s a magnificent ballad that’s followed, after a sleepy reprise of “Lucky Old Sun”, by the equally magnificent “Goin’ Home”, a thunderous Do It Again of a tune, with the much-quoted pivotal line “At 25 I turned out the light/‘cos I couldn’t handle the fear in my tired eyes”. That is in turn followed by the goosebumpy southern California – “I had this dream/ Singing with my brothers/ In harmony/ Supporting each other”. And then out on another reprise. Yes, it’s an old pop tactic, but it works incredibly.

This album doesn’t always gel, it’s slightly too reliant on its creator’s past, and those narrative bits may not be strictly necessary (I quite like them, though), but so what? There are very few other albums this year with as much force, verve, and sheer musical imagination as That Lucky Old Son. And none of them have been made by a 66-year old man who most of us thought would never utter a coherent sentence again, let alone start making extraordinary music.