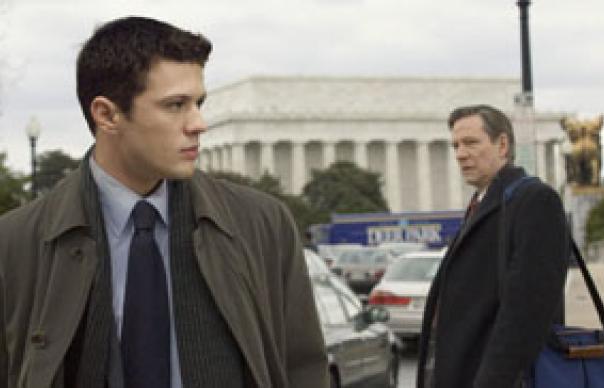 Eric O’Neill (Phillippe) is assigned by the FBI to shadow Robert Hanssen (Cooper), who is suspected of being a double agent, but Hanssen is a complex, manipulative character, who seems to lead a blameless life. O’Neill has to get close to Hanssen to win his trust, but the closer he gets, the more his own life unravels.

In the US, director Billy Ray’s treatment of the true story of FBI operative Robert Hanssen has been praised for avoiding sensationalism, and for maintaining tension, despite the fact that most of the audience would have known the outcome. Fair comment, but it also means that non-American audiences, less familiar with the case, will see a different film. And it’s true – until the final third, when events harden into the kind of bleak bitterness you might find in a Cold War thriller, it’s not quite clear whether Hanssen is – as the FBI suspects – an ice-hearted spy, or – as you find yourself hoping – a brilliant, bitter man, being edged into oblivion by a system he’s learned to despise.

Ray has been down this road before. His first feature, Shattered Glass, told the story of Stephen Glass, who was fired by The New Republic after the magazine discovered his brilliant journalism was fiction. That story had obvious echoes of All The President’s Men, but Breach is thematically closer in its forensic depiction of the cat-and-mouse game between the Feds’ and Hanssen. A more contemporary comparison is Zodiac, but Ray is a less flashy director than David Fincher, and his drama plays out in the blue-grey light of anonymous striplit offices.

Ostensibly, the hero is the ambitious, cocky Eric O’Neill (Ryan Phillippe), promoted from surveillance duties to shadow Hanssen, in a new department dedicated to protecting the integrity of classified intelligence. At first, O’Neill is given a false brief, and believes he’s watching Hanssen for sexual irregularities, and resents being stuck with such a petty assignment.

Hanssen (Chris Cooper), a stern father-figure with deep religious convictions, insinuates his way into his life, while also boasting that he can always tell when he is being lied to. Their relationship is based on mutual deception, with each man taking turns to play on the insecurities of the other. Hanssen tells O’Neill that the Intel side of the FBI is “Siberia: the rubber gun squad,” and that as he nears retirement he’s looking forward only to getting his photo on the wall reserved for those with 25 years service. “Doesn’t really matter much,” he says flatly. “The judgments of other men. I know what I’ve done.”

Breach doesn’t quite have the poetry of The Conversation, but as an examination of paranoia and ambition, it deserves to be mentioned in the same breath as Coppola’s film. At the centre of it is a chilling performance from Cooper, who’s entirely plausible as a hunted, lonely man, staring down the barrel of his conscience.