BLACK MOUNTAIN – IN THE FUTURE 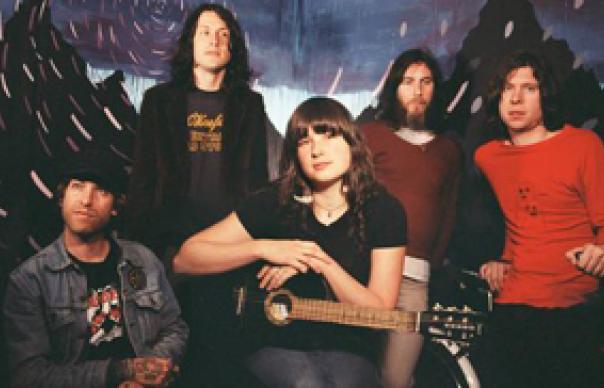 Befitting a band named after a particularly large pile of hashish, Vancouver collective Black Mountain‘s second album balances the otherworldy with the downright paranoid. Following the sleeper success of their debut – which made Number Four in Uncut’s albums of the year list in 2005 and saw them invited to support Coldplay on a North American arena tour – the band apparently cloistered themselves in the studio to record for 14 days straight, barely pausing to eat or see daylight.

The results are accordingly pretty spooky-sounding. Housed in a sleeve that rivals The Pretty Things‘ Parachute for its sunset-on-Mars sense of retro-modernist sci-fi abandon, this is an album alive with tales of witches, demons, sun cults, and one 17-minute song, “Bright Lights”, whose sole lyrics warn us of impending war, destruction and darkness.
All good fun, then. But where Black Mountain‘s first full-length melded churning Sabbath riffs to Velvets drones, here the sense of stoned, “What’s-that-moving-in-the shadows” edginess is augmented by slightly more streamlined music. During their time off keyboardist Jeremy Schmidt released an album of ambient krautrock played entirely on 1970s analogue synths, meaning that In The Future is as informed as much by the fluid soundscapes of Klaus Schulze and Tangerine Dream as, say, Tony Iommi‘s cro-magnon guitar or Mo Tucker‘s cardboard-box beat.

It’s captivating, cosmic stuff. The band (who all still hold down day jobs as mental healthcare and drug rehabilitation workers) switch between swamp and space with admirable grace, held together by singer Amber Webber‘s remarkably full-lunged vocals and Stephen McBean‘s bleak vision of the world.

Because, for a collective of bearded Canadian hippies, Black Mountain are quietly, distractedly angry: both “Tyrants” and “Bright Lights” rage against leaders who wage unjust wars. But where Black Mountain‘s message begins to get woolly the music is never anything less than exhilarating. Detractors might write them off as retro-rock throwbacks, but Black Mountain understand that sometimes you have to look behind you to find the future.

Were you surprised by the success of your first album?

Stephen McBean: “We just got back from tour last night and at a lot of shows there were kids that had driven 5 or 10 hours from other small cities. When I was a kid I’d listen to Rudminetary Peni’s (i)Death Church(i) over and over and it’d make the bad things in my life seem better. Feeling that our music might be the same for other people is incredible.”

“There’s one song, Wucan, that’s about the dance that children do at a funeral around the fire while the bodies are being burnt to protect the spirits from the evil people who try and pull their souls down to purgatory – it feels like a lot of the record is about trying to break free of all the things that tie you down and keep you from doing what you want.”